CRISPR stands for Clustered Regularly Interspaced Short Palindromic Repeats. The discovery of the type II prokaryotic CRISPR “immune system” has allowed for the development for an RNA-guided genome editing tool that is simple, easy and quick to implement. The CRISPR acronym is usually pronounced as a word, "crisper."

How Does CRISPR/Cas Work?

The CRISPR pathway was discovered in bacteria, where it functions much like an immune system against invading viruses and plasmid DNA. Short DNA sequences (spacers) from invading viruses are incorporated at CRISPR loci within the bacterial genome and serve as “memory” of previous infection. Re-infection triggers the complementary mature CRISPR RNA (crRNA) to find a matching sequence – which provides the CRISPR-associated (Cas) nuclease the specificity to form a double-strand break at specific “foreign” DNA sequences. 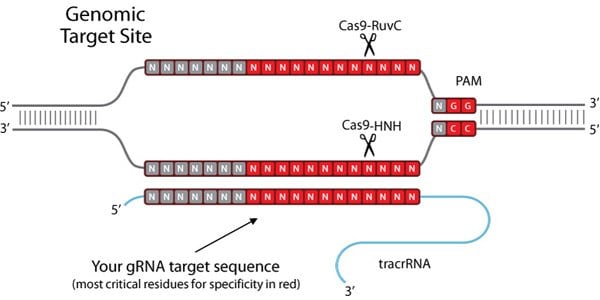 How Does CRISPR Cas9 Work?

To create such a tool, the endogenous CRISPR pathway was reduced to two principal components: the Cas9 nuclease and a guide RNA (gRNA)1-7. The guide RNA is a two component system consisting of the crRNA and tracrRNA. The crRNA targets the double stranded DNA to be cut, and has a short region of homology allowing it to bind the tracrRNA. The tracrRNA provides a stem loop structure which associates with Cas9 protein. The crRNA:tracrRNA duplex is referred to as the gRNA. The Cas9 nuclease and gRNA form a Cas9 ribonucleoprotein (RNP), which can bind and cut a specific DNA target in a whole genome context. In order to be cleaved by the RNP, a target must possess two specific sequences. First, the gRNA requires 17–21 bases of RNA-to-DNA homology, which is called the protospacer. Second, the Cas9 protein requires a short protospacer adjacent motif (PAM) in order to bind to the target DNA (Figure 2). If linking tracrRNA is present, and enough homology exists between the gRNA and the genomic target, the RNP cleaves both strands of the target DNA, creating a DSB at this precise location in the genome. 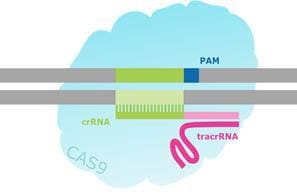 While the functional CRISPR in the nucleus is in RNP form, the elements of CRISPR as a molecular tool are amenable to various methods of delivery. Early experiments succeeded in creating a chimeric single guide RNA, or sgRNA, that combines the crRNA and tracrRNA into a single RNA strand rather than the duplex found in nature. This sgRNA and Cas9 mRNA can be expressed from a single plasmid for either direct transfection or packaging into particles for lentiviral transduction. Alternatively, recombinant Cas9 protein can be combined with synthetically produced crRNA and tracrRNA to create an RNP for transfection or microinjection to embryos.

Following targeted DSB formation, the cell typically uses one of two DNA repair pathways to survive: non-homologous end joining (NHEJ) or homology dependent repair (HDR). These repair mechanisms often make mistakes, resulting in mutagenesis at the target location either by disrupting a coding sequence to functionally inactivate or knockout a gene (NHEJ) or by adding new DNA sequence to knock-in specific sequence changes (HDR). In this way, the CRISPR/Cas9 system enables permanent, heritable modifications of chromosomal DNA. In addition, the CRISPR system can be used as a targeted delivery system when Cas9 endonuclease domains are inactivated and attached to other effector molecules to act at the gRNA-specified site in the genome. This expands the CRISPR system functions to gene activation and inhibition. Finally, the CRISPR system can be used for screening. All four primary uses of the CRISPR/Cas9 system—gene knockout, gene knock-in, gene activation or inhibition, and screening—are further discussed below.

CRISPR/Cas9 generates knockout cells or animals when co-expressed with a gRNA specific to the gene to be targeted. The purpose of gene knockout is to reveal gene function by disrupting its expression in the cell. A co-expressed, properly designed gRNA directs Cas9 to cleave a target sequence and generate a DSB in the gene of interest. Gene knockout can then be achieved in any one of three ways: 1) the cell repairs the break via NHEJ, leading to random insertions or deletions (“indels”) within the open reading frame (ORF) of the cleaved gene; 2) the cell repairs the break via HDR from a user-supplied template, inserting a specific disruptive sequence into the ORF; 3) a pair of gRNAs create two DSBs that flank an essential coding sequence, resulting in its excision.

NHEJ is the most active repair mechanism, but is error-prone and will often introduce a frameshift, causing a premature stop codon and/or causing the resulting transcript to be targeted for nonsense-mediated decay (NMD). Frameshift modifications can cause premature stop codons to be introduced into the transcript, preventing critical parts of the amino acid chain from being translated, resulting in an abnormally short, nonfunctional protein. Nonsense-mediated decay functions to reduce errors in gene expression by eliminating mRNA transcripts that contain premature stop codons. It is theorized that this surveillance pathway is activated when exon-exon junction complexes—protein complexes that form on the pre-mRNA strand between exons during RNA splicing—are not properly removed by the ribosome after a transcript is spliced. When an exon-exon junction complex remains bound due to an upstream frameshift, the transcript is signaled for degradation and the functional protein is never translated. Both of these pathways are effective in disrupting gene function in a cell.

CRISPR/Cas9 can also be used to introduce, or “knock in”, new DNA sequences. Common modifications include the introduction of a single nucleotide polymorphism (SNP), small tag, loxP, or a larger cassette such as a fluorescent protein. These modifications are made through a Cas9-induced DSB at a specific location, which significantly enhances the opportunity for targeted integration. Targeted integration (gene knock-in) occurs through HDR. In order to enable gene editing by HDR, a DNA "donor" or repair template containing the desired sequence must be delivered to the cell, usually on a donor plasmid or oligonucleotide, along with the gRNA and Cas9. The efficiency of gene knock-in is generally lower than for knockout (<10% of modified alleles), but can be used to generate specific modifications ranging from a single nucleotide change to large insertions.

In addition to functioning as a genome editing tool, CRISPR can also be used as a targeted delivery system for other functional proteins. A unique feature of Cas9 is its ability to bind target DNA independently of DNA cleavage, as these are two separate steps of Cas9’s mechanism. Wild-type Cas9 has two nuclease domains: RuvC and HNH. To achieve binding without cleavage, both nuclease domains are rendered inactive by inducing point mutations (D10A and H840A in SpCas9), resulting in a nuclease dead Cas9 (dCas9). When combined with gRNAs targeting transcriptional start sites, it was discovered that dCas9 alone was sufficient to decrease or inhibit transcription by blocking transcription initiation. Following this development, scientists began experimenting with transcriptional repressors and activators tethered to dCas9. The KRAB transcriptional repressor domain has been fused to dCas9 as a mode of effector domain-mediated transcriptional silencing. dCas9 has also been fused to transcriptional activators and transcriptional effector proteins. dCas9 for activation is a widely popular area of study and includes systems such as, dCas9-VP64, dCas9_SunTag, dCas9-SAM, dCas9-RNA Scaffold, and dCas9-VPR. In our product offering, we have fused dCas9 to the catalytic histone acetyltransferase (HAT) core domain of the human E1A-associated protein P300. When combined with gRNAs targeting transcriptional start sites and enhancer regions, dCas9-P300 directs histone acetylation, releasing DNA from its heterochromatic state to upregulate gene expression via endogenous cellular machinery in the native chromosomal context. The dCas9-P300 histone acetylation approach represents a distinct mechanism of action relative to dCas9-VP64 or other similar gene activation motifs.

Screens enable a quick survey of large numbers of candidate genes or genomic sites for involvement in your pathway or phenotype of interest. Improvements in pooled oligo manufacturing and big data handling, combined with the efficiency of lentiviral delivery, allow researchers to consider thousands of candidate genes at once, either as a library or a more focused panel. We define libraries as whole genome collections of CRISPR clones; panels are smaller gene subsets. Generally, panels and libraries may be assembled in two formats: pooled (thousands of gRNA in one tube) or arrayed (one gRNA per well in 96-well plates). Both approaches provide rapid answers to larger questions, offering significant advantages over past methods that required a time- and labor-intensive process of interrogating candidate genes one at a time.

We offer a variety of screening solutions, including the pooled GeCKO libraries from the Broad and the Sanger Arrayed Whole Genome Lentiviral CRISPR Library to perform large gene knockout screens(8). And, coming soon are the human and mouse CRISPR/Cas9 Synergistic Activation Mediator (SAM) pooled libraries for genome-wide screening of transcriptional activation phenotypes!

CRISPR/Cas9 systems were discovered in 1993, and shown to have evolved within bacterial and archaeal organisms as a defense against viruses and foreign plasmids. The function of the native CRISPR pathway is to target nucleases to invasive DNA, creating a potentially lethal double-strand break (DSB). Shortly after the function of this pathway was recognized, the type II CRISPR/Cas9 system from the bacterium Streptococcus pyogenes (SpCas9) was repurposed to create a simple, yet powerful molecular tool that could be programmed to target nucleases to a specific genomic sequence.

Our Role in Developing CRISPR/Cas9

We are proud to offer our newest line of CRISPR genome editing tools to the global research community. As the first company to commercially offer targeted genome editing technology nearly ten years ago, no one has more expertise in this field than us. This experience is especially important when it comes to crafting genome editing tools that possess the critical requirements of having specific targeting and robust cutting activity. We provide both in our new CRISPR product line, and now we put our skill into your hands with a quick and simple web-based design platform. Our CRISPR products can be ordered directly through the link below or browse the CRISPR content on this page to learn more about the technology.

Paired Cas9 Nickases - For optimal Cas9-D10A paired nickase functionality, guide RNAs should be designed in a 5’-to-5’ orientation with PAM spacing between 30 and 150 bp. 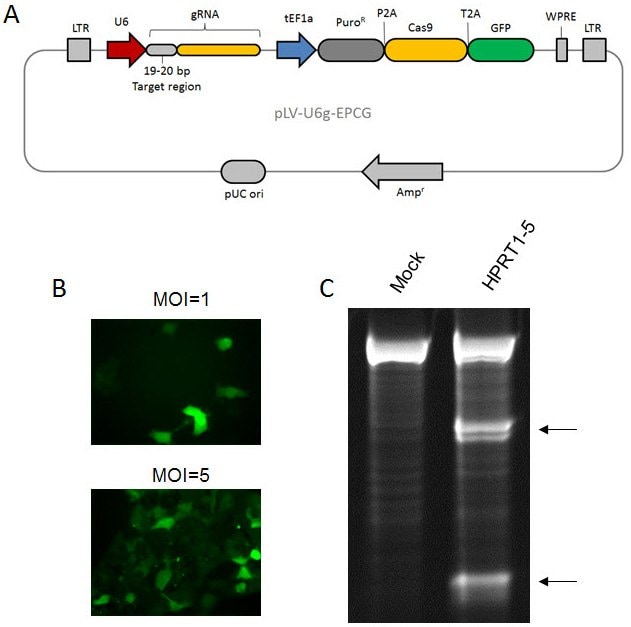 Figure 6. Lentiviral CRISPR:(A) Vector map of the all-in-one lenti CRISPR vector. (B) GFP signal post-transduction of HEK293 cells with particles made via pLV-U6g-EPCG. (C) HeLa cells were transduced with lentivirus (pLV-U6g-EPCG) followed by selection on puromycin and 6TG treatment to enrich for HPRT1 knockouts. Insertions and deletions were detected at the gRNA target site via mismatch assay (CEL-I). 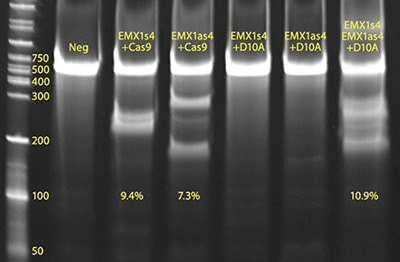