GC-MS is a powerful tool for the analysis of unknowns and complex mixtures due to the existence of vast GC-MS spectral libraries, making the identification of many compounds possible. In the case of complex mixtures containing many peaks, differences in mass fragmentation patterns can be used to resolve two peaks that are not chromatographically resolved. This ability, exclusive to mass spectral detectors (MSDs), is often referred to as “resolving by mass”. This is not to be confused with the term “mass resolution” which refers to the ability of the MSD to distinguish between two different masses.

On a standard GC detector such as an FID, the data obtained for a chromatographic peak is two-dimensional, that is, it consists of time vs. response. In the case of an MSD, the data for each peak can be thought of as three-dimensional. It consists of time vs. response vs. mass to charge ion, or m/z. The MSD can acquire the m/z data by either continuously scanning a mass range (scan mode), thus obtaining mass spectra of each chromatographic peak, or by monitoring selective ions (SIM mode). In this later case, since the MSD is not scanning a mass range, a spectrum cannot be obtained for each peak.

Resolved Chromatographically vs. Resolved by Mass

A total ion current (TIC) chromatogram of a semivolatile standard is presented in Figure 1. Two specific areas have been highlighted to represent a peak pair that is chromatographically resolved: benzo(b)fluoranthene/benzo(k) fluoranthene, and a peak pair that is not: bis(2-chloroisopropyl) ether/2-methylphenol. We shall demonstrate why the former pair must be resolved chromatographically, while the later pair can be resolved by mass. 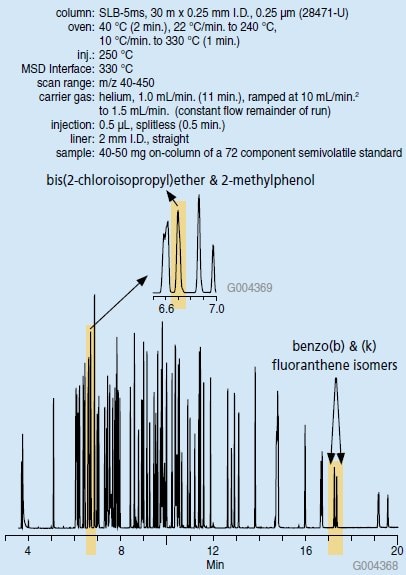 Figure 1.TIC Chromatogram of a GC-MS Analysis of a Semivolatile Standard (28471-U)

When using an MSD in scan mode, quantitation is usually done by monitoring response for a specific ion in an analyte’s mass spectrum. In many cases, this ion, termed the “quantitation ion”, is the most abundant in the spectrum. Other lesser abundant ions may also be monitored to aid in proper identification of the analyte. These are often termed “qualifier” ions, and are not used in quantification of the peak. During the quantitation process, the quantitation ions are extracted from the TIC chromatogram. The result is termed an “extracted ion current” or EIC chromatogram. This is demonstrated in Figure 2 for the benzo(b)fluoranthene and benzo(k) fluoranthene peaks indicated in the TIC chromatogram in Figure 1. These compounds are isomers, and have the same mass spectra. As a result, the EIC chromatogram of the quantitation ion, m/z 252, within the relevant retention time window shows two peaks. For this reason, these peaks must be resolved chromatographically in order to be identified and quantified accurately.

In the case of bis(2-chloroisopropyl)ether and 2-methylphenol, the two peaks are not chromatographically resolved. However, the mass spectrum for each is different,and unique quantitation ions can be chosen such that the peak produced in the relevant retention time window of the EIC chromatogram is specific to each compound. Library spectra for both compounds are presented in Figure 3. The largest ions, or base peaks, present in each MS spectrum could be chosen as quantitation ions, as they are not common between the two compounds. In the case of bis(2-chloroisopropyl)ether, this is m/z 45, and in the case of 2-methylphenol, this is m/z 108.

EIC chromatograms of each of these ions in the retention window for these compounds will produce a single peak (Figure 4) that can be used to accurately quantify each compound. If an ion common to both spectra such as m/z 77 is chosen, a single peak is still obtained in the EIC chromatogram, however it now represents both analytes. This is an example of how by choosing unique ions, coeluting peaks can be resolved by mass. 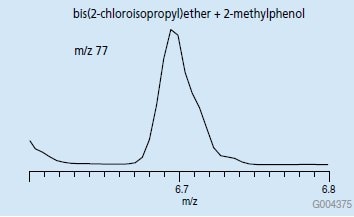 We have demonstrated the meaning of “resolving peaks by mass”, which is a power unique to mass spectral detectors. This can simplify chromatographic method development by allowing for coelutions of peaks that have unique ions in their respective mass spectra, and narrowing focus to those coelutions involving compounds with similar mass spectra, such as isomers. In the case of chromatographic coelutions, care should be taken when choosing quantitation ions for each analyte to ensure that there is no interference from coeluting peaks. If it is not possible to choose unique ions, then the GC method must be modified to resolve the affected peaks chromatographically. This can be done by modifying analysis conditions, or using a GC column with different selectivity.