Dialysis is frequently mentioned in the literature as a technique to remove salt or other small molecules and to exchange the buffer composition of a sample. However, dialysis is generally a very slow technique, requiring large volumes of buffer. During handling or as a result of proteolytic breakdown or non-specifc binding to the dialysis membranes, there is a risk of losing material. A simpler and much faster technique is to use a desalting column, packed with Sephadex G-25, to perform a group separation between high and low molecular weight substances. Proteins are separated from salts and other small molecules.

In a fast, single step, the sample is desalted, transferred into a new buffer, and low molecular weight materials are removed.

Desalting columns are used not only to remove low molecular weight contaminants, such as salt, but also for buffer exchange before or after different chromatographic steps and for the rapid removal of reagents to terminate a reaction.

Sample volumes up to 30% of the total volume of the desalting column can be processed. Sample concentration does not inﬂuence the separation as long as the concentration of proteins does not exceed 70 mg/mL when using normal aqueous buffers. The sample should be fully dissolved. Centrifuge or flter to remove particulate material.

For small sample volumes, it may be possible to dilute the sample with the buffer that is to be used for chromatographic purifcation, but cell debris and particulate matter must still be removed.

To prevent possible ionic interactions the presence of a low salt concentration (25 mM NaCl) is recommended during desalting and in the fnal sample buffer.

Figure 76 shows a typical buffer exchange and desalting separation. The process can be monitored by following changes in UV absorption and conductivity. 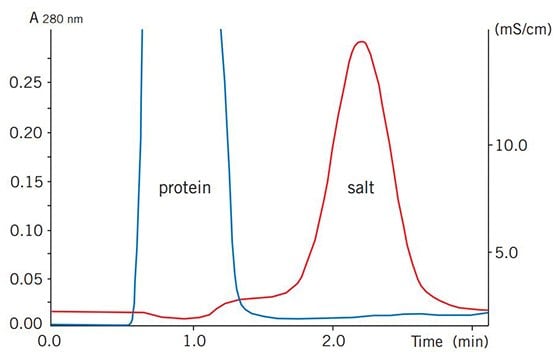 For laboratory scale operations, Table 16 shows a selection guide for prepacked, ready to use desalting and buffer exchange columns.

Instructions are supplied with each column. Desalting and buffer exchange can take less than 5 minutes per sample with greater than 95% recovery for most proteins.

Collect the desalted protein in the volume indicated.

Note: 5 mL/min corresponds to approximately 120 drops/min when using a HiTrap® 5 mL column. A simple peristaltic pump can also be used to apply sample and buffers.

The maximum recommended sample volume is 1.5 mL. See Table 17 for the effect of reducing the sample volume applied to the column.

A simple peristaltic pump can also be used to apply sample and buffers.
Alternative 2: Simple desalting with ÄKTAprime plus 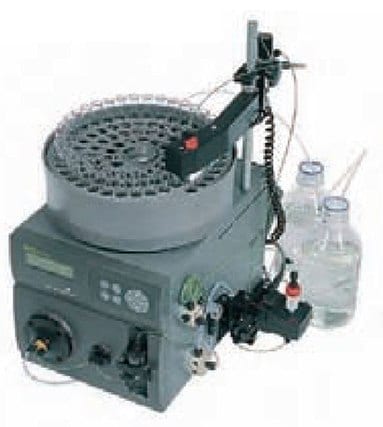 Prepare at least 500 mL of the required buffer.

Figure 77 shows a typical result obtained from ÄKTAprime plus. The UV (protein) and conductivity (salt) traces enable pooling of the desalted fractions. 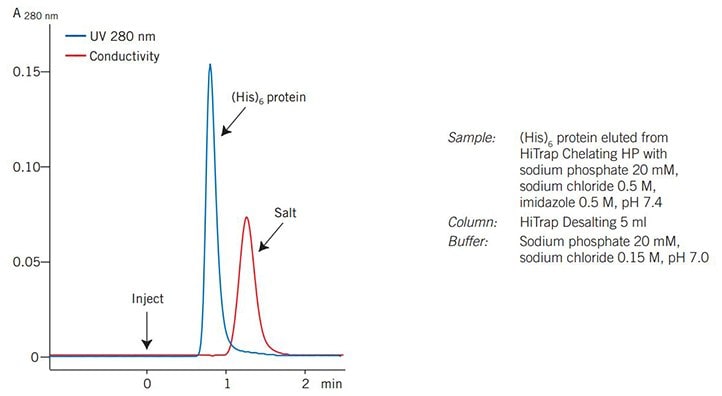 Figure 77.Desalting of a (His)6 fusion protein on ÄKTAprime plus.