Performing a Separation with Sephadex®

Desalting and buffer exchange can take less than 5 min/sample with greater than 95% recovery for most proteins.

The sample should be fully dissolved. Centrifuge or filter to remove particulate material (Appendix 3). Always use degassed buffers to avoid introducing air into the column.

Sample concentration up to 70 mg/mL protein should not inﬂuence the separation when using normal aqueous buffers.

If possible, use a chromatography system with both a UV and a conductivity monitor to facilitate optimization of the sample loading. The elution of the protein peak at A280 and the appearance of the salt peak can be followed exactly and different separations can be easily compared as shown in Figure 5.6.

If conductivity cannot be monitored and recovery of completely desalted sample is the major requirement, apply sample volumes of between 15% and 20% of the total column volume. 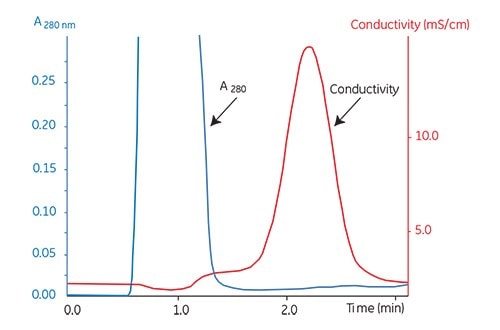 Or sample volumes ranging from 0.2 to 2.5 mL, it is possible to run multiple samples in parallel with PD-10 Desalting, PD MidiTrap™ G-25, and PD MiniTrap™ G-25 columns. Two different protocols are available for these columns: one for manual use on the laboratory bench and one for use together with a standard centrifuge in combination with a Spin Adapter. For smaller proteins (Mr > 700), PD MiniTrap™ G-10 and PD MidiTrap™ G-10 columns may be used.

Sample concentration does not influence the separation as long as the viscosity does not differ by more than a factor of 1.5 from that of the buffer used. This corresponds to a maximum concentration of 70 mg/mL for proteins, when normal, aqueous buffers are used. The sample should be fully solubilized. Centrifuge or filter (0.45 μM filter) immediately before loading to remove particulate material if necessary.

Protein solubility often depends on pH and/or ionic strength (salt concentration), and the exchange of buffer can therefore result in precipitation of the protein. Also, protein activity can be lost if the change of pH takes it outside of the range where the protein is active. Samples that have been obtained after purification will usually be free from particles, unless the purified protein or a contaminant has been aggregated. 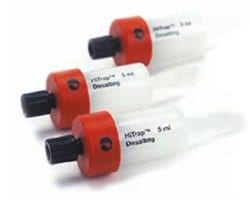 HiTrap® Desalting is a 5 mL column (Figure 5.7) packed with the SEC medium Sephadex G-25 Superfine, which is based on cross-linked dextran beads. The fractionation range for globular proteins is between Mr 1000 and 5000, with an exclusion limit of approximately Mr 5000. This ensures group separations of proteins/peptides larger than Mr 5000 from molecules with a molecular weight less than Mr 1000.

HiTrap® Desalting can be used with aqueous solutions in the pH range 2 to 13. The prepacked medium is stable in all commonly used buffers, solutions of urea (8 M), guanidine hydrochloride (6 M), and all nonionic and ionic detergents. Lower alcohols (methanol, ethanol, propanol) can be used in the buffer or the sample, but we recommend that the concentration be kept below 25% v/v. Prolonged exposure (hours) to pH below 2 or above 13, or to oxidizing agents, should be avoided.

The recommended range of sample volumes is 0.1 to 1.5 mL when complete removal of low molecular weight components is desired. The separation is not affected by the flow rate, in the range of 1 to 10 mL/min. The maximum recommended flow rate is 15 mL/min. Separations are easily performed with a syringe, pump, or chromatography system. Up to three columns can be connected in series, allowing larger sample volumes to be handled. To avoid crosscontamination, use the column only with the same type of sample.

Manual puriﬁcation with a syringe

Figure 5.8.Using HiTrap® columns with a syringe. (A) Prepare buffers and sample. Remove the column’s top cap and twist off the end. (B) Equilibrate the column, load the sample, and begin collecting fractions. (C) Wash and elute, continuing to collect fractions.

For large sample volumes, a peristaltic pump can be used to apply sample and buffers.