As a major metabolite of methylphenidate (1, Ritalin), ±-threo-Ritalinic acid (2) is of clinical relevance. To this end ±-threo-ritalinic acid-D10 HCl (3) was synthesized in seven steps with a purity of 99% and an isotopic purity ratio of D0/D10 = 0% and a significant amount of the D9-D7 isomers. Because practical ion monitoring is based on the ratio of D0/D10, the standard was found to be suitable for use as an internal standard in LC-MS/MS analysis of ritalinic acid and related compounds. The presence of significant amounts of the D9 isomer prompted extensive structure elucidation work using 1D, 2D, and qNMR techniques.

Methylphenidate, most commonly known by the Novartis trade name Ritalin®, is a pyschostimulant used to treat attention-deficit hyperactivity disorder, postural orthostatic tachycardia syndrome, and narcolepsy, by increasing alertness and attention and by counteracting fatigue. Methylphenidate was originally sold as a mixture of diastereomers, although it has been shown that the majority of the activity is attributed to the ±-threo isomer. More recent products such as Focalin® contain only the active ±-threo isomer. While analytical reference standards of the diastereomeric mixture of methylphenidate and its metabolites are available, standards containing only the active isomer are now desirable to reflect the current directive of using only the active isomer in drug products. Therefore it is also desirable to synthesize stable-labeled derivatives of the active isomers of methylphenidate and its metabolites, such as ritalinic acid, for use as internal standards.

Based on literature precedence 1-3, ±-threo-Ritalinic acid-D10 HCl was synthesized in seven steps from pyridine-D5. During the synthesis, the crucial reduction of the pyridine moiety to the fully deuterated piperidine proceeded in good yield but LC/MS SIM indicated that product contained a mixture of 55% D10, 34% D9 and 11% D8-D7. The presence of the D0 isomer was not detected. This deuterium ratio was carried through to the final product.

Further treatment of ±-threo-ritalinic acid-D10 HCl with Pt/C, D2, and AcOD did not result in an enrichment of the deuterium content. The isotopic distribution was fully characterized to determine suitability for use.

The identity of ±-threo-Ritalinic acid-D10 HCl was established through NMR and mass spectrometry. The chemical purity was established through HPLC/UV, Karl GC/FID Headspace and ROI. LC- MS/MS studies were performed to evaluate isotopic purity, deuterium distribution, fragmentation patterns and suitability for use as an internal standard. HPLC analysis indicated a purity of 99% with isotopic purity ratio D0/D10 = 0% by LC/MS-SIM. Additionally, LC/MS-SIM confirmed the presence of 45% D9-D7 isomers (see isotopic distribution at left).

Finally, NMR techniques including 1H, 13C, COSY, HSQC, and qNMR were used to determine the placement of the deuterium on the molecule. 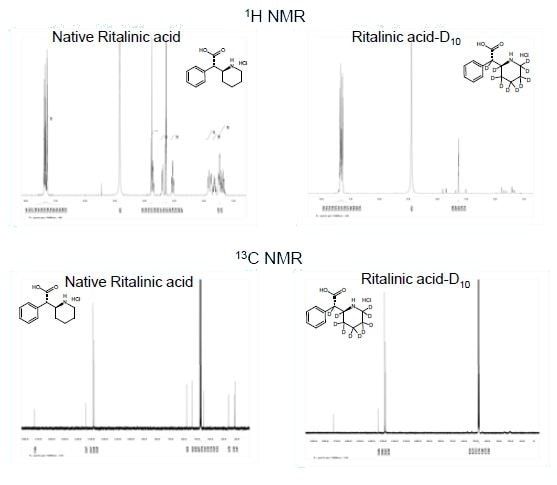 LC/MS-SIM clearly shows incomplete deuterium exchange with only 55% D10. Additionally, the data suggested that some proton to deuterium exchange had also occurred on the aromatic ring. It was therefore desirable to determine the placement of the deuterium labels. 1H NMR clearly shows the presence of a roughly even distribution of protons on the piperidine moiety. Unfortunately, the lack of a reference peak in the 1H NMR made it impossible to determine the extent of the distribution of deuterium on this ring or whether the exchange had also occurred on the aromatic ring. Therefore, Quantitative NMR was used to determine the percent deuterium on each carbon in the molecule.

Using maleic acid as an internal standard, Quantitative NMR (qNMR) was used to determine the percentage of hydrogen and therefore deuterium on each carbon of ±-threo-Ritalinic acid-D10 HCl. 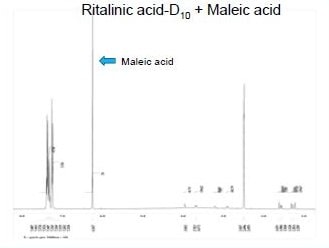 The molar mass of the product is calculated based on isotopic purity results obtained by LC/MS-SIM.

qNMR confirmed the presence of a nearly even distribution of deuterium throughout the piperidine moiety and also revealed that a small percentage of the hydrogens on the aromatic moiety had exchanged for deuterium as well. These results suggest that the Pt/C catalyst used in step 5 of the synthesis also facilitated the exchange of some of the aromatic hydrogens deuterium.

±-threo-Ritalinic acid-D10 HCl was synthesized in good yield, sufficient ratio of D0/D10, and 99% purity making it an extremely useful internal standard for the quantitation of ritalinic acid. LC/MS-SIM indicated significant amounts of D9-D7 with no D0. 1H and 13C NMR spectra could not provide definitive information as to where the deuterium were placed. qNMR was, therefore, used to determine exactly what percentage of deuterium is present on each carbon in the molecule. This data indicated that the reduction in step 5 using Pt/C resulted in incomplete deuterium exchange and even caused the exchange of a small percentage of the aromatic protons to deuterium. This study highlights chemical interactions that factor into the design of stable labeled internal standards for LCMS applications.