CRISPR endonucleases have shown wide variation in their activity, even among multiple CRISPRs designed within close genomic proximity.1 For this reason, we highly recommend that you test 3 to 4 CRISPR nucleases that target different DNA sequences. Since size of the DNA target site for CRISPR systems is significantly smaller than that required for CompoZr® ZFNs (e.g., 30-36 bp), care must be taken during design to ensure minimal off-target breaks elsewhere in the genome. Recent evidence indicates that off-targeting by CRISPR endonucleases is a significant concern and some guidance for avoiding off-target activity is beginning to develop 5, 8 Many on-line tools are available for CRISPR design, however, we have applied our core capabilities in specific ZFN design to the CRISPR/Cas system to create an in silico collection of genome-wide CRISPR target sequences. Please check our on-line CRISPR product offerings for the latest CRISPR design sets and custom design services for ZFNs, CRISPR, and related donor DNAs.

Note: unless specified via custom requests, our CRISPR plasmid products are delivered as mini-prep aliquots which may not be suitable for transfection into particular cell types. For best results, we advise maxi-prepping plasmids using endotoxin-free DNA purification kits prior to transfection.

Previous experience with many ZFN projects has shown that nucleofection is a robust delivery method for a wide variety of cell types. For initial experiments in human cells, we advise nucleofecting maxi-prepped CRISPR plasmid DNA into well-validated cell types such as K562 or U2OS to assess double strand break activity or donor integration levels. These cell lines have been shown to respond with high levels of homologous recombination2 making them ideal for testing compatibility of ZFN and CRISPR nucleases with newly designed donor constructs before moving to a more challenging or unknown cell type. For mouse and rat cell culture testing, neuro2A and C6 are suitable cell types for initial CRISPR experiments. A good starting point for dosage experiments is 2-8 µg of CRISPR plasmid per 0.5 to 1 million cells.

Since our single vector format contains a GFP-linked expression cassette for Cas9, transfected cells can be subsequently inspected by microscopy or FACS to monitor transfection efficiency (Figure 1) prior to performing genotyping assays or single cell cloning efforts.

Several published protocols exist for monitoring double strand break (DSB) activity. The most rapid, flexible, and economical assay is the mismatch cleavage assay which can detect the variety of insertions and deletions (indels) generated by NHEJ activity in eukaryotic cells. The most common protocols use the CEL-I enzyme (a.k.a. Surveyor nuclease)6 and T7 endonuclease I (T7EI).7 If sufficient bioinformatics and deep sequencing resources are available at your institution, deep sequencing can also be used to detect and quantitate indel activity in CRISPR-treated cell populations.

If you cannot detect DSB activity despite many attempts for a particularly favored CRISPR design, consider enriching the cell population for Cas9-GFP expression as described in the next section.

Since the plasmid in this product implements a GFP-linked Cas9 expression cassette, fluorescence-activated cell sorting (FACS) can be used to isolate cell populations with significantly increased frequencies of Cas9-induced modifications (Figure 2). This FACS-enrichment approach is particularly useful in scenarios where delivery efficiencies and/or Cas9 expression levels are low or undetectable. Furthermore, the GFP co-expression approach has advantages over surrogate reporters including:

a) Cas9-GFP linked expression does not require the extra step of cloning of artificial target sites into surrogate reporter plasmids.
b) A reduction in the total amount of transfected dsDNA. In many cases, certain cell types are sensitive to high amounts of dsDNA, and adding additional dsDNA mass in the form of a surrogate reporter plasmid to existing CRISPR and donor vector constructs can result in cell toxicity.
c) The option to use “dsDNA free” approaches by implementing Cas9-GFP mRNA, in vitro transcribed gRNA, and single stranded oligos (ssODNs).

The Cas9 and GFP protein coding regions are linked by a small sequence encoding a 2A-peptide. The 2A peptide is a ‘‘self-cleaving’’ peptide which allows production of two individual proteins from one transcript and utilizes “ribosomal skipping” rather than proteolytic cleavage mechanism to generate two individual proteins.3, 14

Cells can be harvested for FACS according to commonly used protocols. We suggest that cells be sorted into fractions with low, medium, and high GFP expression levels. Cell populations with the highest GFP expression have been shown to enrich genome edits with the extent of the “high” fraction ranging from 1 to 30% of the total cell population. The optimal size of the “high” and “medium” populations may vary, depending on genomic loci, cell types, delivery methods, and other experimental variables. A good start is to divide the cell population into three low, medium, and high fractions each of which comprises 1 to 20% of the total cell population. 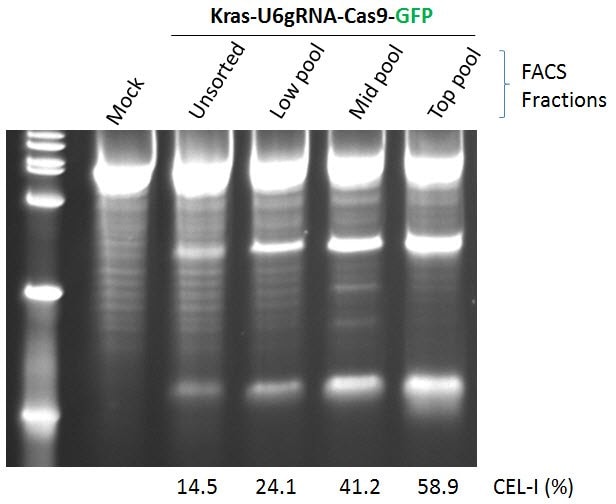 The Cas9 protein implemented in this vector contains both HNH and RuvC activities enabling the creation of double strand breaks. Cas9 is linked to Evrogen’s TagGFP2 fluorescent proteins. TagGFP2 is the improved variant of TagGFP, a mutant of the Aequorea macrodactyla GFP-like protein.15, 17 TagGFP2 possesses bright green fluorescence with excitation/emission maxima at 483 and 506 nm, respectively. The 2A-GFP encoding sequence is flanked by two HpaI restriction sites which allow removal or replacement of the 2A-GFP element. The XbaI site can be used to linearize the vector for production of Cas9-GFP mRNA via in vitro transcription using T7 RNA polymerase.