Protein Tyrosine Kinases (PTKs) play important roles in modulating a wide variety of cellular events, including differentiation, proliferation, metabolism and apoptosis. Those regulations are mediated by a series of signal cascades that involve phosphorylation of tyrosine residues in target proteins. Therefore, identification of the substrates for PTKs is very important for the studies in both basic research and drug development environment. Here, we report a high-throughput ELISA-based method to identify peptide substrates for class-specific and/or enzyme-specific PTKs that can be utilized for the detection of kinase activity both in vivo and in vitro. The amino acid sequences of peptide library containing 13-mer tyrosine peptides were generated by a predicting algorithm developed in-house for all potential protein substrates of PTKs identified from the public databases. Next, the peptides were synthesized using PEPscreen, a proprietary peptide synthesis platform, and then subjected to a screening of 39 PTKs using an ELISA-based method. The number of peptides selected for each PTK ranges from 2 to 71 with an average of 25 from a total of 376 peptides tested. The 173 sequences selected were classified into different groups with the reactivity to single, multiple, or all PTKs. The reactivity and specificity of the selected peptide substrates were further validated. The validation results indicated that this screening method has a very high sensitivity and reproducibility. Thus, the combination of our algorithm for selecting peptide sequences, the PEPscreen peptide synthesis platform, and ELISA-based assay method provide a successful high-throughput system for the screening of peptide substrates for many PTKs.

The potential substrates of identified pharmaceutical important kinases were obtained by searching public databases (Phospho.ELM, and PhosphoSite). The FASTA sequence file including all the amino acid sequences of the substrates were then compiled and loaded onto KinasePhos database (no longer available) searching for the potential phosphorylation sites of each substrate. The output files were then modified by a computer program to identify the 13-mer peptides covering the potential phosphorylation sites. The commercially available peptide substrates for tyrosine kinases were used as the positive controls for screening.

Preparation of peptide library for screening

The peptides were reconstituted with 50% Acetonitrile at the final concentration of 5 mM. Four 96-well plates of peptides were reformatted into one 384-well plate. The 5 mM peptides were diluted to 0.5 mM with Tris-buffered saline (TBS) as working solutions for screening. 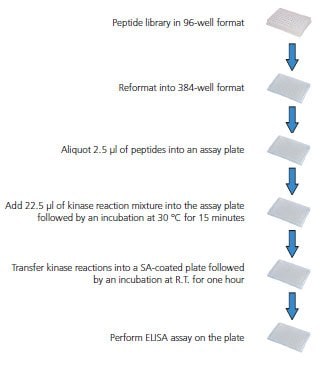 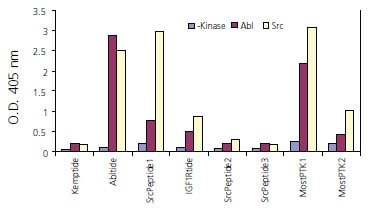 Figure 2.A total of nine biotinylated peptides were synthesized and the kinase assays were performed with Abl or Src kinase as described in Materials and Methods. The phosphorylated tyrosine residue was then detected by an ELISA-based assay using anti-phosphotyrosine antibidy. The results shown in the graph are the averages of two replicates. Kemptide: Biotin- LRRASLG-OH (a serine peptide as negative control); Abltide: Biotin-EAIYAAPFAKKK-OH; Src peptide1: Biotin-KVEKIGEGTYGVVYK-OH: IGF1Rtide: Biotin-KKKSPGEYVNIEFG-OH; Src peptide2: Biotin-IYGEF-OH: Src peptide3: Biotin-TSTEPQYQPGENL-OH: Most PTK1: Biotin-KKKGPWLEEEEEAYGWLDF-OH; Most PTK2: Biotin-RRLIEDAEYAARG-OH.

Figure 3.A A total of four biotinylated peptides were synthesized and then coated on the Streptavidin plate at 5 μg/mL, 1 μg/mL, 0.2 μg/mL, and 40 ng/mL. The ELISA-based assay was performed as described in Materials and Methods. Kemptide: Biotin-LRRASLG-OH; pS-Kemptide: Biotin-LRRApSLG-OH; Y-peptide: Biotin-RRLIEDAEYAARG-NH2; pY-peptide: Biotin-RRLIEDAEpYAARG-NH2. B 50 μL of pY-peptide (200 ng/mL) was used to coat Streptavidin plate. The phosphorylated tyrosine was detected by a series dilution of anti-phosphotyrosine antibody following the protocol described in Materials and Methods. 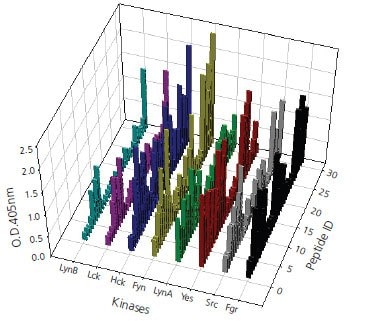 Figure 4.A total of 170 peptide substrates, divided in three groups based on different tyrosine protein kinases, have been selected after primary screening. Validation of peptide candidates was performed by ELISA assay with three repeats for each enzymatic reaction.This figure shows the validation results of activity assay for Tyrosine kinases of Src family against selected candidate peptides. The validation data are consistent and positively correlate more than 80% of results obtained in primary screening.