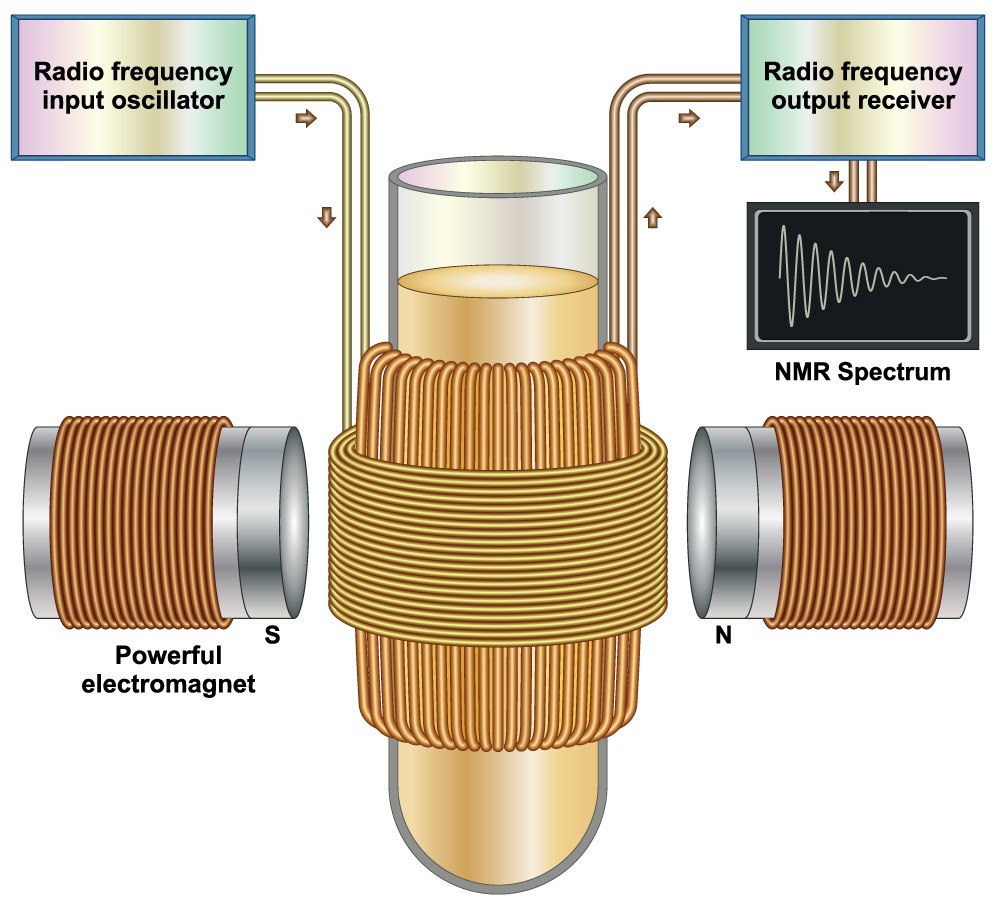 Nuclear Magnetic Resonance (NMR) spectroscopy is an analytical technique used to determine the molecular structure and chemical composition of a sample. It works by analyzing the interaction of spinning nuclei in a strong magnetic field. In NMR spectroscopy, a stationary external magnetic field causes certain nuclei in a molecule to absorb selective radiofrequencies. The energy absorbed induces a transition in nuclear spins, which is observed on an NMR spectrum.

NMR spectroscopy is a non-destructive and non-invasive technique that is used to determine molecular structure and dynamics. The applications of NMR are diverse and include the following research areas and industries:

Nuclear spin is related to the composition of an element’s nucleus. Nuclei containing an even number of both protons and neutrons have 0 nuclear spin and cannot undergo NMR (e.g., 4He,12C,16O). Nuclei with an odd number of protons and/or neutrons display nuclear spin and can experience NMR (e.g., 1H, 2H, 14N, 17O). These nuclei behave like tiny spinning magnets and can interact with an external magnetic field. Spinning nuclei also create their own magnetic field that can interact with other nuclei having spin.

During NMR, an applied magnetic field excites nuclei having different magnetic moments across various energy levels. After absorbing a characteristic radiofrequency, the excited-state nuclei return to lower energy states by transferring energy to the surrounding environment. When energy is transferred to other atoms or the solvent, the relaxation process is called ‘spin-lattice relaxation’. If energy is transferred to neighboring nuclei at the same energy level, the process is termed ‘spin-spin relaxation’. These two relaxation processes are characterized by time constants: spin-lattice relaxation time (T1) and spin-spin relaxation time (T2), which are responsible for the resulting NMR spectrum.

Characteristics of a NMR Spectrum

Solvents
Browse through our comprehensive range of solvents offered under three portfolio brands for your various applications: Supelco® for analytical methods, Sigma-Aldrich® for classic research and production, and SAFC® for biopharmaceutical and pharmaceutical applications. Order online.
Stable Isotopes
ISOTEC® Stable Isotopes are stable isotope compounds, ranging from gases to complex molecules, that are useful for tracer studies in proteomics and metabolomics, agents for MRI / MRS, and in a wide range of other biomedical applications.
Chromatography & Spectroscopy Reagents
Explore our selection of high-quality analytical reagents for wet chemistry, chromatography, spectroscopy, analytical, titration, water quality control, and electrochemistry.