The Novabiochem® product line has always been at the forefront of the development for methods for the synthesis of peptides containing PTMs, being the first company to provide effective building blocks for synthesis of phosphorylated peptides, and sulfotyrosine and methylated arginine containing peptides by Fmoc chemistry. Here, we provide an overview of our available reagents, together with recommendations and details of their use.

This topic has been recently reviewed by Dr. John Offer and Novabiochem® scientists.1

For step-wise synthesis of phosphotyrosine containing peptides, the three most commonly used derivatives are Fmoc-Tyr(PO(OBzl)OH)-OH 1,2 Fmoc-Tyr(PO3H2)-OH 2,3 and Fmoc-Tyr(PO(NMe2)2)-OH 3.4 Each has its merits and limations. Fmoc-Tyr(PO(OBzl)OH)-OH is the most popular, despite the partially protected phosphate causing issues during coupling and chain extension. It is best incorporated using uronium-based coupling reagents as HBTU or HATU 5 (Method 1). Increasing the excess of DIPEA used with the uronium reagent from the typical two to three-fold excess has been found to be beneficial.6 The partially protected phosphate can form salts with piperidine during Fmoc removal.7 Acylation of this piperidine results in a reduction in the excess of activated amino acid present in the coupling reaction. Whilst this does not pose a significant problem when the peptide contains only one phosphoamino acid, it can lead to serious difficulties with incomplete coupling reactions with peptides containing numerous phosphorylated residues. Fortunately, this problem can be overcome by simply increasing the excess of coupling reagents used or by exchanging the piperidine counterion for a tertiary amine (Method 2). The benzyl side-chain protecting groups are normally removed in 1-2 hours during the course of the standard 95% TFA. Benzylation of sensitive residues such as Tyr, Cys during the cleavage reaction has occasionally been observed. In such cases, the use of EDT in the cleavage mixture should minimize this side reaction.

Fmoc-Tyr(PO3H2)-OH is the simplest and most cost effective derivative for the introduction of phosphotyrosine by Fmoc synthesis.3 As the phosphate group is not protected, there are no issues with protecting group removal. However, like Fmoc-Tyr(PO(OBzl)OH)-OH, the lack of phosphate protection does lead to problems during its introduction and that of subsequent residues. Coupling is generally very sluggish and is best achieved using HATU in conjunction with at least three equivalents of DIPEA. Furthermore, pyrophosphate formation has been observed in peptides containing adjacent Tyr(PO3H2) residues.8, 9

In contrast to Fmoc-Tyr(PO3H2)-OH and Fmoc- Tyr(PO(OBzl)OH)-OH, which have potentially reactive acid functionalities in their side-chains, the phosphate group in Fmoc-Tyr(PO(NMe2)2)-OH 4 is fully protected. This confers not only improved solubility properties on the compound but, more importantly, avoids the side reactions associated with the use of the fomer. Fmoc-Tyr(PO(NMe2)2)-OH can be introduced using any of the standard coupling methods, such as PyBOP®/DIPEA, TBTU/DIPEA and DIPCDI/HOBt. Regeneration of phosphotyrosine from the phosphodiamidate is effected by acid catalyzed hydrolysis.7 Detachment of the peptide from the resin and deprotection of side-chains is first carried out in the usual manner with TFA containing the appropriate scavengers. 10 % by volume of water is then added to the cleavage solution and the mixture left to stand overnight, during which time hydrolysis of the phosphodiamidate takes place (Method 3).

Fmoc-Phe(CF2PO3H2)-OH 4 (Fmoc-F2Pmp-OH) is used to incorporate the stable phosphotyrosine isostere, F2Pmp.10 F2Pmp is an excellent mimic of pTyr as it has a pKa2 of 5.71 so is fully ionized at neutral pH, and the methylene fluorine atoms can undergo H-bonding. Peptides substituted with F2Pmp exhibit high binding affinities to SH2 domains.11 1000-Fold enhancements in affinities of F2Pmp-containing peptide compared with those containing the non-fluorinated Pmp have been observed in assays against PTPs.12 The use of the Fmoc-F2Pmp-OH, which lacks side-chain protection, for the introduction of F2Pmp residues eliminates the need for the harsh conditions required to remove the ethyl group usually employed for phosphonate protection.13 However, lack of phosphate protection does result in sluggish coupling of Fmoc-F2Pmp-OH and the subsequent amino acid derivative. Overnight coupling with HATU and three equivalents of DIPEA appears to be effective.

For the step-wise synthesis of phosphoserine and threonine containing peptides, the only option is to use the monobenzyl derivatives, Fmoc-Ser(PO(OBzl)OH)-OH 5 14, 2, 15 and Fmoc-Thr(PO(OBzl)-OH 2, 15 6, since fully protected phosphate triesters of these amino acids undergo β-elimination when treated with piperidine. As with Fmoc-Tyr(PO(OBzl)OH)-OH, the side-chain phosphate group is only partially protected in these derivatives, so special consideration must be given to the conditions employed for their introduction. Best results are obtained using uronium-based coupling reagents in the presence of a three-fold excess of DIPEA.

N-terminal Ser(PO(OBzl)OH) residues can undergo β-elimination during piperidine-mediated Fmoc removal under microwave conditons. This problem could be eliminated by replacing piperidine with cyclohexylamine just for this step.16 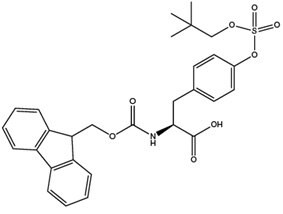 It is believed that up to 1% of all protein tyrosine residues in eukaryotes may be sulfated.17 Sulfation is thought to be involved in the modulation of the extracellular protein-protein interactions of secreted and transmembrane proteins. It is also an essential requirement for maintaining the biological activity of a number of peptide hormones such as gastrin II, cholecystokinin, and caerulein.

One of the principal hurdles to studying tyrosine sulfation is the difficulty in obtaining site-specifically sulfated peptides because tyrosine sulfate esters are rapidly degraded in acid and fragment during mass spectrometry, making their synthesis and characterisation highly problematic. With the introduction by Novabiochem® of Fmoc-Tyr(SO3nP)-OH 7,18 the synthesis of sulfotyrosine-containing peptides is now routine. Fmoc-Tyr(SO3nP)-OH, can be coupled using any standard coupling method. Furthermore, the derivative has excellent solubility in DMF or NMP, faciliting its use in automated synthesizers without modification of existing protocols. The nP group is stable to piperidine and TFA, so the nP group requires removal post-cleavage with either sodium azide or ammonium acetate.19

Extended cleavage times should be avoided as some loss of the nP group can occur during prolonged contact with TFA. Ideally, the progress of the cleavage reaction should be followed by sampling of the reaction and analysis by HPLC. Cleavage times of 1.5 hours generally result in minimal loss of the nP group. Peptides containing Tyr(SO3nP) are more strongly retained on HPLC columns than the corresponding Tyr and Tyr(SO3-) peptides. They can also be detected by positive mode ES-MS and MALDI-MS.

nP sulfate esters are stable to piperidine but are readily cleaved using small powerful nucleophiles such as azide or cyanide. For peptides the reaction is most conveniently conducted in DMSO or DMF at 50 °C. Overnight treatment is usually sufficient to effect complete reaction. Following reaction, removal of excess azide can be effected by SPE or HPLC, using non-acidic buffers. For some peptides, the nP group can be removed by simply dissolving the peptide in 2 M ammonium acetate and warming the mixture at 37 °C overnight.

For the Fmoc SPPS of O-glycosylated peptides, Novabiochem® offers Fmoc-Ser(Ac3AcNH-α-Gal)-OH, Fmoc-Thr(Ac3AcNH-α-Gal)-OH, Fmoc-Ser(Ac3AcNH-β-Glc)-OH and Fmoc-Thr(Ac3AcNH-β-Glc)-OH. O-linked glycosides based on 2-acetamido-2-deoxy-a-D-galactopyranosyl (AcNH-α-Gal) are found in wide variety of biologically important glycoproteins such as mucin, the tumor-associated Tn-antigen, and gp120 from HIV20. Modification of serine or threonine residues with 2-acetamido-2-deoxy-b-D-glucopyranosyl (AcNH-β-Glc) on the other hand is more akin to phosphorylation.21 The addition and removal of O-AcNH-β-Glc is a dynamic process controled by a transferase, UDPGlcNAc polypeptide transferase (OGT), and removed by a β-N-acetylglucos-aminidase. Only a single sugar is added the carbohydrate is not further extended. O-AcNH-β-Glc glycosylation processes are thought to be involved in transcription, signal transduction, apoptosis, and glucose homeostasis.

N-linked glycosides all contain a mannotriosido-di-N-acetyl-chitobiose core linked via a b(1→Nβ) linkage to Asn. Novabiochem offers the glycopeptide precursor, Fmoc-Asn(Ac3AcNH-β-Glc)-OH 22 in which a single N-acetylglucosamine moiety is attached to the side chain of Asn.

All N- and O-linked oligosaccharide amino acid derivatives above are compatible with standard Fmoc SPPS protocols. Owing to the high cost of these reagents, their introduction is best carried out manually using small reagent excesses and the coupling checked using the TNBS or Kaiser tests. Any standard coupling method can be used for this purpose. Following chain assembly, removal of the acetyl protecting groups can be carried out by treatment of the peptidyl resin with methanolic ammonia23 or sodium methoxide/DMF/methanol,24 or treatment of the cleaved peptide with catalytic sodium methoxide in methanol.25 Post-translational methylation of arginine and lysine residues is now recognized as an important control mechanism for the regulation of protein expression in eukaryotes.26, 27 Most of the possible methylated derivatives have been found to occur in vivo, including mono-, di- and trimethylated lysine, and mono and dimethylarginine, both asymmetric and symmetric. Such modifications are thought to be involved in cell proliferation, signal transduction, protein transport and transcription activation. Novabiochem® offers a comprehensive range of side-chain N-methylated amino acids bearing standard Fmoc-compatible protecting groups. For the incorporation of the most common arginine modifications, monomethyl arginine and symmetric (SAMA) and asymmetric dimethylarginine (ADMA), Novabiochem offers Fmoc- Arg(Me,Pbf)-OH, Fmoc-SAMA(Boc)2-ONa and Fmoc-ADMA(Pbf)-OH. These derivatives can be coupled using standard activation methods, and the Pbf and Boc groups are cleaved with standard TFA cleavage cocktails. Fmoc-Lys(Me,Boc)-OH, Fmoc-Lys(Me)2-OH ·HCl and Fmoc-Lys(Me3Cl)-OH are available for the introduction of monomethyl, dimethyl and trimethyl lysine, respectively. All are compatible with standard Fmoc SPPS protocols. However, the side chain of dimethyllysine can promote Fmoc cleavage so short single coupling should be used for its introduction and the following amino acid in the peptide chain.