Fluorinated compounds possess distinct characteristics that confer desirable physico-chemical properties compared to their non-fl uorinated analogs. Their abundance in pharmaceuticals, chemicals, consumer products and as environmental pollutants dictates the need for a reliable analytical method. Ascentis HPLC columns, by virtue of their effi ciency and choices in stationary phase selectivity, are ideally suited for the analysis of fl uorinated compounds.

Fluorinated compounds and their H-containing analogs are isosteres because both atoms possess the same number of valence electrons. Isosteres are studied based on the premise that similarities in properties of elements within vertical groups of the Periodic Table are due to identical valence electronic confi gurations. The isostere replacement of the H in a C-H bond with a fl uorine atom confers unique biological, chemical and physical properties on the molecule. Researchers in many areas of chemistry and biochemistry exploit these differences. Fluorinated compounds are abundant in consumer products, including coatings, lubricants, plastics, cleaners, fi refi ghting foams, food containers, cosmetics, medical devices and pharmaceuticals (1). As a consequence, they pass into the environment prompting the need for their analysis in soil, water and biota, including animals and humans (2, 3).

Fluorine isostere replacement imparts different characteristics onto the drug substance. For example, it may alter lipophilicity which in turn affects absorption, uptake, distribution and excretion of the drug.

A prime example of this is uracil, a natural component of RNA, and 5-fl uorouracil, which is lethal if incorporated into RNA and is widely used in the treatment of cancer (4). Fluorinated compounds also are more resistant to metabolic oxidation and enzymatic cleavage, giving them better stability against microbial degradation than their non-fl uorinated analogs in some cases (5, 6).

Fluorination is also used in pharmaceutical mechanistic studies. For example, Tang et al. (7) used α-fl uorinated analogs as mechanistic probes in valproic acid-induced hepatotoxicity. The substitution of a fl uorine atom at the α-position to the carboxylic acid group creates a derivative that contains a chemically and enzymatically inert carbon center that is not hepatotoxic.

Finally, the halogenation profi le has also been used in the forensic investigation of illicit drug traffi cking. For example, depending on the source, methamphetamine may contain varying degrees of I, Br and F, among other elements. (8).

The prevalence of fl uorinated compounds in medicine, industry and the environment requires a reliable analytical method. A detailed review of modern detection and identifi cation methods that are specifi c for fl uorine- and other halogen-containing compounds was written by Brede and Pedersen-Bjergaard (9). In every reference cited here, HPLC and LC/MS were the primary means for separation, identifi cation and quantifi cation of fl uorinated compounds. HPLC is especially suited to pharmaceutical compounds because it can accommodate polar, water-soluble, thermally-labile compounds and the biological matrixes in which they are often found. HPLC also has the ability to resolve compounds that have subtle differences in molecular structure, like isostere analogs and metabolites.

The compounds flumethasone, triamcinolone acetonide, clobetasol propionate and fl uticasone propionate are topical corticosteroids used to help relieve redness, swelling, itching and discomfort of many skin problems. They share the underlying cortisone structure. The four compounds are shown in Figure 1 separated on an Ascentis C18 column using a simple gradient of acetonitrile in water. 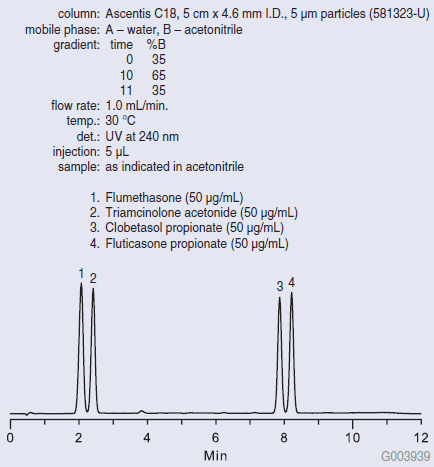 Figure 1.Separation of Fluorinated Corticosteroids on Ascentis C18 (581323-U) These compounds fi nd primary indication for the treatment of cancer and viral infections. Their polar nature, compared to the corticosteroids, makes them ideally suited to separation on a polar-embedded HPLC phase, like the Ascentis RP-Amide shown in Figure 2. 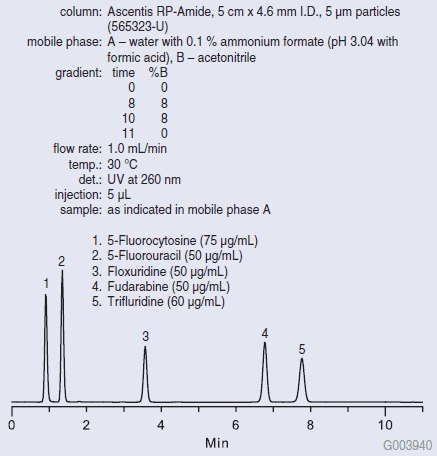 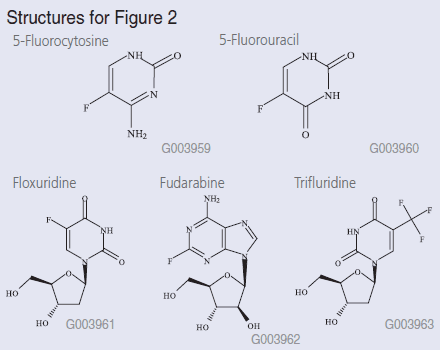 Floxacins are a class of anti-infective drugs. An Ascentis Phenyl column and a gradient of acetonitrile in 1% ammonium formate gave rapid, baseline resolution. 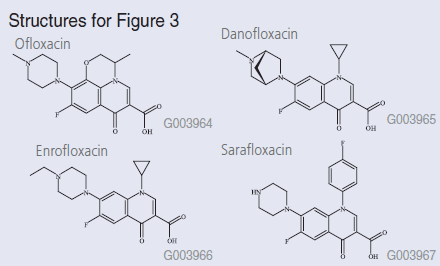