Turmeric is a plant indigenous to south Asia, with a majority of its production coming from India. The rhizome of the plant is used to produce powdered turmeric, which is used in foods, cosmetics, and some medicines. It is also an essential constituent of curry, which is a mixture of spices used extensively in Indian cooking. Turmeric has also been used in traditional medicines for thousands of years and recently has garnered attention for studies showing its potential antioxidant, anti-inflammatory, antimutagenic, antimicrobial, and anticancer properties.

Pesticide residue testing of turmeric and other spices is required by many countries. For example, Canada has set maximum residue limits for 42 different pesticides in turmeric root. The U.S. EPA has set tolerance limits for a variety of pesticides in root and tuberous vegetables, of which turmeric is included.

Turmeric contains more than 100 different components, with two of the main constituents being curcumin and volatile oils. Curcumin gives turmeric its distinctive yellow/orange color, while the volatile oils consist primarily of terpenes. Turmeric also contains some fats; specifically, sterols and fatty acids. This complex composition makes extracts produced from turmeric a challenge in the chromatographic analysis of pesticides, as residual pigments and oils can contaminate both GC/MS and LC/MS systems.

When dealing with very high background samples such as turmeric, standard QuEChERS cleanup may not offer enough capacity. For better cleanup, solid phase extraction (SPE), including dual-layer cartridges, can be used. These cartridges often contain graphitized carbon black (GCB) in the top bed and primary-secondary amine (PSA) in the bottom bed. PSA retains acidic interferences such as fatty acids. GCB removes planar molecules such as pigments and sterols. Common GCBs, however, will retain all molecules with planar structures, including some pesticide analytes such as hexachlorobenzene. To increase recoveries of these pesticides, toluene is normally added to the elution solvent. However, there are issues associated with the use of toluene. It can affect the ability of the PSA to retain fatty acids, and its presence in the final extract is problematic for HPLC analysis.

In this application, a different dual-layer SPE cartridge was used in the cleanup of extracts of turmeric powder prior to pesticide analysis by GC/MS/MS and LC/MS/MS. This cartridge, the Supelclean™ Ultra 2400, was designed for the cleanup of acetonitrile extracts made from difficult matrices such as dry commodities (spices, tea, etc.) prior to pesticide residue analysis. The top bed consists of a mixture of PSA, C18 and a graphitized, spherical carbon known as Graphsphere™ 2031. This carbon was engineered to remove sufficient pigmentation while allowing for better recoveries of planar compounds, without the need for toluene in the elution solvent. The bottom layer of the cartridge contains Z-Sep, a zirconia-coated silica. Z-Sep removes oily residues and provides additional retention of some pigments. The combination of these sorbents in an SPE format offers more capacity than QuEChERS cleanup, and compared to traditional GCB/PSA dual layer cartridges, does not require the use of toluene in the elution solvent to recover planar pesticides.

Turmeric powder was obtained from a local grocery store. Samples were spiked at 100 ng/g with the pesticides listed in Tables 1 and 2. Sample extracts were prepared and cleaned following the procedures in Figure 1. A set of 3 spiked samples and 1 unspiked (blank) were prepared and analyzed for each set of pesticides. Analysis was done by GC/MS/MS and LC/MS/MS using the conditions listed in Tables 3 and 4 (with MS/MS transitions shown in Tables 1 and 2). Quantitation was performed against multi-point calibration curves prepared in unspiked turmeric extract (after cleanup). Recoveries were calculated as the average of the three spiked replicates, less anything found in the unspiked extract. No internal standards were used, thus the values reported represent absolute recoveries.

Prior to cleanup, the extract appeared orange-brown in color with a yellow oily residue (Figure 2). After cleanup for both LC and GC, the extracts appeared substantially lighter and clearer. Figures 3 and 4 show a comparison between extracts at the same level of dilution with and without cleanup. The LC extract (in 80% aqueous) was almost devoid of color, with very little cloudiness. The extract for GC analysis was a pale yellow color, with substantially less oily residue. Full scan GC/MS analyses of GC extracts are shown in Figure 5 as total ion chromatograms (TICs). The peak pattern is similar between the two, with the main peaks consisting primarily of terpenes. These compounds are easily volatilized in the GC inlet, and do not pose issues with system contamination, however they can interfere with mass spectral detection, requiring the use of MS/MS for selectivity. The overall amplitude of the peaks was less after cleanup, as is shown by a 21% reduction in the peak area sums for each in Figure 5. 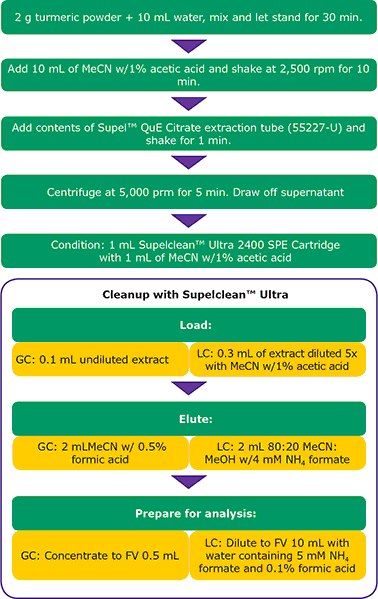 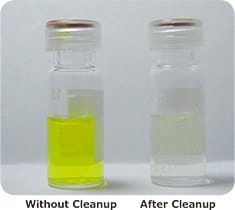 Figure 3. Turmeric Extracts at the Same Dilution (167X total); Without Cleanup, and After Cleanup for LC/MS/MS Analysis Figure 4. Turmeric Extracts at the Same Dilution (5X); Without Cleanup, and After Cleanup for GC/MS/MS Analysis

The average recoveries obtained from spiked turmeric samples (n=3) are presented in Table 5. Of the 51 pesticides spiked, all except hexachlorobenzene had recovery of greater than 70%. Hexachlorobenzene, a pesticide with a planar structure, was recovered at 67% after cleanup. It should be noted that this was without using toluene in the elution solvent, as is necessary to obtain good recoveries from dual-layer cartridges containing graphitized carbon black. Although not shown here, higher recovery of hexachlorobenzene has been obtained by loading more turmeric extract (300 μL) on the Supelclean™ Ultra 2400 cartridge. This indicates that the presence of more matrix displaced the hexachlorobenzene, thus reducing its retention on the carbon. However the higher sample loading produced an extract with more color, a sign that the cleanup capacity of the cartridge had been reached or exceeded for this matrix. 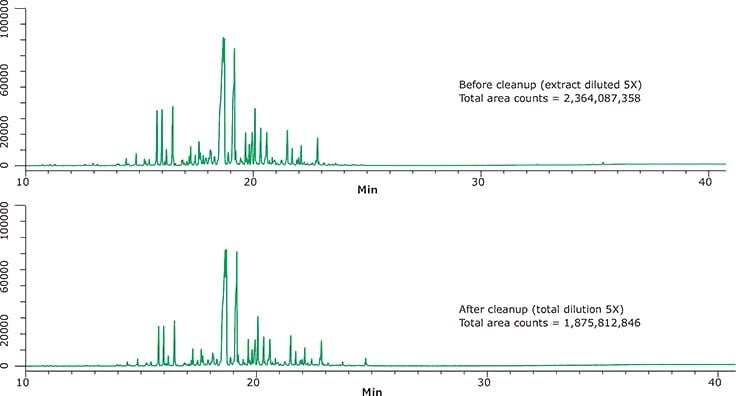 Figure 5.GC/MS Scan Analyses of Turmeric Extracts Before and After Cleanup with Supelclean™ Ultra 2400 Shown with same Y-scale. Sum of area counts for all peaks is indicated with each. A new cleanup method has been developed using the Supelclean™ Ultra 2400 dual-layer SPE cartridge. The selection of sorbents in this cartridge allows for cleanup of acetonitrile extracts of very difficult samples such as spices and other dry commodities. The Graphsphere™ 2031 carbon used in the upper layer removes/reduces pigmentation while still allowing for recovery of planar pesticides without the use of toluene in the elution solvent. Z-Sep sorbent in the bottom layer of the cartridge removes oils and some pigments, as was indicated in the cleanup of turmeric extracts for both GC and HPLC analysis. Suitable recoveries for a wide range of pesticides of different polarities and classes were obtained from turmeric extract, and minimal background interference was noted. In this work, a 1 mL Supelclean™ Ultra 2400 cartridge was used. A larger 3 mL version of the cartridge is also available which can accommodate a higher sample loading.

The author would like to thank Richard Schriner and Bruce Morris of R.J. Hill Laboratories for their helpful discussions and input.