Human neural stem cells (hNSCs) have been intensely studied for their therapeutic potential in neurodegenerative diseases and spinal injuries. Depending on the microenvironment and growth stimuli, these cells can undergo neurogenesis and replace damaged cells. In the central nervous system, neurogenesis alone is not sufficient to repair neuronal damage. Functional neurons need to be protected by a myelin sheath, which is synthesized by oligodendrocytes, in order to successfully deliver a long-distance action potential. Understanding oligodendrocyte development is a necessary milestone towards developing clinical and pharmaceutical treatments for neurodegenerative pathologies such as multiple sclerosis.

104 cells/cm2 OPCs were plated on 0.1% poly-L-ornithine (P4957) and 10 μg/mL laminin (L2020) coated Millicell® EZ SLIDES (PEZGS0416) or T25 flasks and cultured overnight before switching to growth factor-free medium. Oligodendrocytes were allowed to mature for 2 to 3 weeks before being fixed with 2% paraformaldehyde or lysed for RNA extraction.

12 mm cover glasses were acid-treated with 1N HCl (H1758) overnight, rinsed with Milli-Q® H2O (MILLIQ) and then sterilized with autoclaving. Cover glasses were air dried before being coated with 0.1% poly-L-lysine (P8920) at room temperature for 1 hour and then washed with sterile distilled water. 1 x 105 primary E19 rat hippocampal neurons (R886N-10) were plated on the poly-L-lysine coated cover glass in each well of a 4-well plate in Dulbecco’s Modified Eagle Medium (DMEM) with 10% heat-inactivated horse serum. 24 to 48 hours after plating, cells were transfected with 1 μg of pCAG-GFP plasmid following the manufacturer’s protocol. 24 hours post-transfection, approximately 10–20% of the primary neurons were GFP-positive. Four days after transfection, 2 x 104 human OPCs were seeded to the plate and the neuronal culture medium was replaced with the Human OPC Spontaneous Differentiation Medium (SCM106). Human OPCs and rat primary neuron co-culture was left at 37 °C in a 5% CO2 tissue culture incubator for 21 days with medium changes every 2 to 3 days.

Three neural progenitor cell lines were tested for OPC enrichment. Among them, the ENStem-A ESC-derived NPC line and the immortalized human fetal NSC line (ReNcell VM) contained a significant number of A2B5- and GalC-positive cells in OEM culture. In contrast, the immortalized human cortical NSC line (ReNcell CX) did not demonstrate a significant difference in marker expression between the parental NSC cell line and the directed differentiation conditions (data not shown).

Figure 1 shows the quantitative and representative images of human NSCs cultured in original medium (parental) or in oligodendrocyte enrichment medium (OEM). ENStem- A cells (Figure 1A and B) displayed moderate increases in the O2A progenitor marker, A2B5, and a 3-fold increase in the intermediate oligodendrocyte marker, GalC in OEM culture. In contrast, ReNcell VM cells (Figure 1C and D) cultured in OEM demonstrated more than 6-fold increases in A2B5 expression and less than 2-fold increase in the GalC expression. This illustrates that, even when subjected to the same enrichment procedure, each NSC line responds differently to small molecules and growth factors. 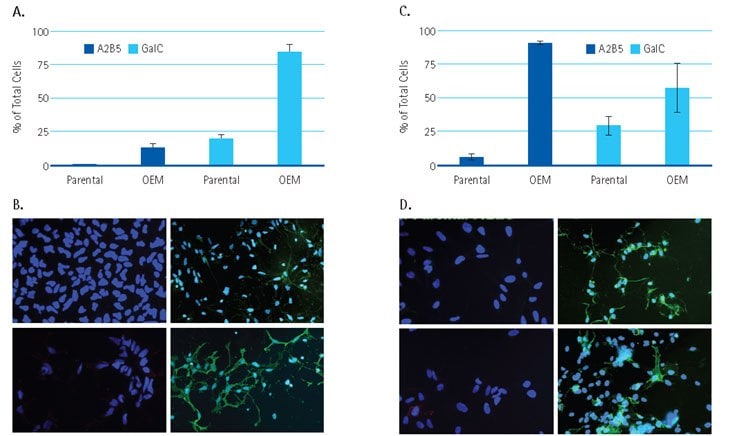 To examine whether OPCs could be stably maintained in oligodendrocyte enrichment medium, we monitored cell proliferation rate by measuring doubling time. Cells doubled every 48 hours for at least 7 weeks in culture (Figure 2A) and the bipolar morphology suggested that these cells were in the neural progenitor/oligodendrocyte progenitor stage of differentiation.

Figure 2. Bright field images of proliferating Human OPCs 24 hours post-thawing (A) and after one week in culture (B). Human OPCs double every 48 hours (C).

We next examined the OPC cells for protein expression by immunofluorescent staining between passage 3 and passage 5. We observed high numbers of cells expressing Olig2 (92%, Figure 3A), Sox10 (81%, Figure 3B), O4 (82%, Figure 3C), NG2 (64%, Figure 3D) and GalC (80%, Figure 3E). After 2 weeks of spontaneous differentiation, cells turned into 50 to 70% of MAP2- or bIII-tubulin-positive neurons (Figure 4) and less than 5% of GFAP-positive astrocytes (Figure 4). 30 to 50% of cells showed robust expression of intermediate to late oligodendrocyte markers MBP, PLP-1, MOG, RIP, GalC and NG2 (Figure 4). 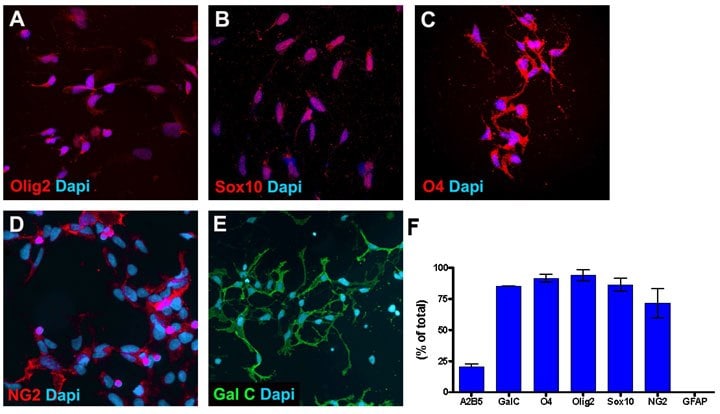 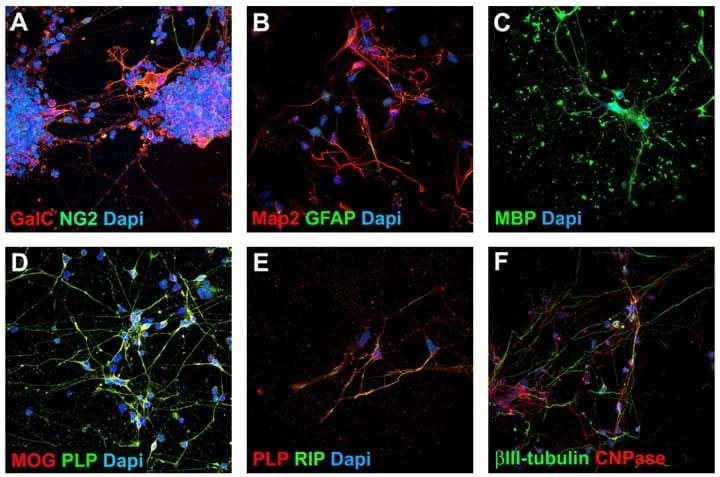 Rat primary neurons isolated from the embryonic hippocampus are mostly pyramidal neurons that have a distinctive morphology composed of single axons and multiple dendrites. To facilitate identification of the rat primary neurons, green fluorescent protein (GFP) was introduced by transient transfection. 10%-20% cells were successfully transfected and GFP expression was stable for the period of observation. Human ES cell-derived OPCs were added to the rat primary neuronal culture at a ratio of 1:5. Three weeks after initiating coculture, we analyzed the relative degree of myelination by immunofluorescent staining. Myelin basic protein (MBP) is a major component of the myelin sheath. In the absence of Human OPCs, rat primary neuronal cultures exhibited little to no staining for MBP (Figure 5A). In contrast, in the coculture containing GFP-labeled axons and human OPCs, significant MBP staining was observed (Figure 5B). The expression of MBP colocalized with nuclei, providing evidence that MBP is expressed from human OPCs. This data suggested that in the presence of mature or developing axons, human ES cell-derived OPCs can be further maturated to functional oligodendrocytes that are capable of producing myelin to protect the axons. 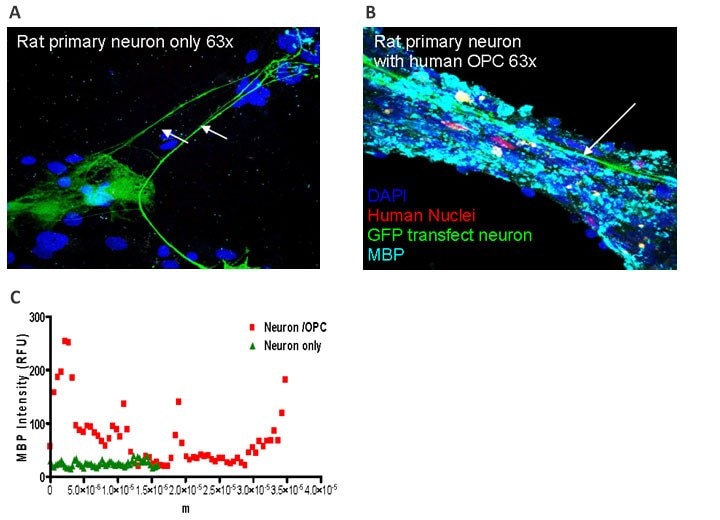 What tissue culture flask should I thaw the cells out onto?

One vial of cells should be thawed and plated onto a Matrigel coated T25 flask. It is not recommended to thaw to a larger sized flask.

The cells are provided at what passage?

Cells were banked at passage 3 and can be expanded twice. Cells should not be used beyond passage 6.

How many times can I passage the cells?

At what confluency should I passage the cells?

Cells should be passaged when they have reached 80% confluency. It is NOT recommended to passage the cells when they are 100% confluent.

What is the optimal splitting ratio?

Can I freeze my cells?

No, we do not recommend freezing the cells. Performance of cells that have been frozen by individual users can’t be guaranteed.

Can I use my media instead?

The Human OPC Expansion Media was optimized specifically for our Human OPCs. Other media have not been tested. If other culture media are used, cells should be extensively characterized by user to ensure that they retain the correct phenotype and staining characteristics.

Can I use the Human OPC Expansion or Differentiation Media kits to expand, culture and differentiate oligodendrocytes that I have obtained from another vendor or have isolated myself?

No. These media were optimized specifically for our Human OPCs. Other cell types have not been tested. We do not believe that cells obtained from other sources or directly isolated from brain tissues will behave similarly in the media system.

Can I use my own growth factors to differentiate?

Can I use a different ECM to coat?

ECMs other than the ones outlined in the kit have not been tested. If the user is contemplating the use of other ECMs, it is recommended that they use the reagents and ECMs outlined in kit as a positive control to compare effects of other ECMs on human OPC expansion and differentiation.