HomeGene Expression & SilencingExamination of Efficacy, Specificity, and Efficiency of an shRNA Lentiviral Library

Examination of Efficacy, Specificity, and Efficiency of an shRNA Lentiviral Library

The introduction of small interfering RNAs (siRNAs) into cultured cells provides a fast and efficient means of knocking down gene expression and has allowed siRNAs to quickly become a ubiquitous tool in molecular biology. While siRNA has been shown to be effective for short-term gene inhibition in certain transformed mammalian cell lines, there is a clear problem in its use in primary cell cultures or for stable transcript knockdown. Recently, shRNA libraries in lentiviral vectors have been described and used for modulating gene expression in human embryonic stem cell (Zaehres, et al., Stem Cells, 2005), as well as in transgenic mice (Ventura et al., PNAS, 2004). We have tested an shRNA lentiviral library (The TRC Library) for its ability to overcome the limitations of siRNAs. We transduced a primary human astrocyte culture with 16 viruses targeting four different genes, all of which have been previously demonstrated as important in astrocyte function (p38a, p38d, MAP3K4, and JNK2). In all 16 cases we were successful at stable infection of cells and knockdown of the target gene. Levels of gene inhibition ranged from 40% to 99%, when compared to control virus infection. We next examined knockdown of each AKT isoform (AKT1, AKT2, and AKT3) for specificity. We found, for each gene, shRNAs that inhibit the one target isoform while sparing the other two isoforms. Finally, we tested a panel of cell lines in order to determine the range of infectivity of this virus. In addition to the primary astrocyte culture, the virus appears effective at gene expression knockdown in A549 (human lung), Panc1 (human pancreas), HCT116 (human colon), and HepG2 (human liver) tumor cells. This research demonstrates that shRNAs in a lentiviral vector may be an effective means of RNA inhibition in a broad spectrum of cells, allowing specific and efficient gene alterations and overcoming the common limitations of siRNAs.

Gene silencing and knockdown using RNA interference is becoming routine. Short hairpin constructs have advantages in some circumstances over siRNA, because the effects of these constructs can lead to a more stable and long-term result. MISSION™ TRC shRNA lentivirus constructs have another benefit, as they can be used to easily transduce typically difficult cell lines, such as primary astrocytes, as well as non-dividing cells. This short hairpin construct library can be used in a wide range of studies including single gene analysis, pathway clarification or even genomewide functional screens.

We have examined the variable knockdown resulting after infection of the human lung tumor cell line A549 by four clones that are designed to target JAK1. The clone providing the best knockdown was then chosen for further study in four other human cell lines.

Specificity of inhibition by shRNA to the target is also very important. Previous studies using siRNAs have shown considerable off-target effects (Jackson, et al., Nat Biotechnol 2003). The human lung tumor cell line A549 expresses all three known isoforms of AKT (AKT1, AKT2 and AKT3). Inhibition of each individual isoform is believed to result in phenotypic differences. Constructs designed to all three isoforms were examined and the resulting effects on the remaining two isoforms were analyzed. 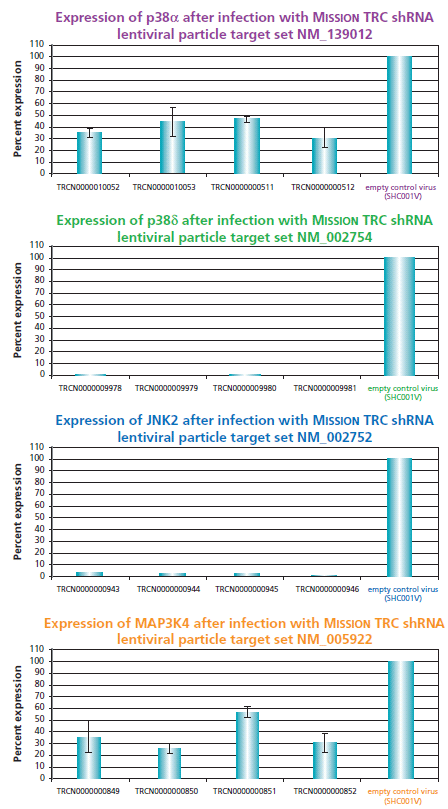 Five of seven JNK2 constructs knocked down mRNA expression by >90%. The remaining two constructs resulted in no discernable knockdown and 62% knockdown of endogenous mRNA expression, respectively. Seven different constructs designed to target the p38a gene were examined. Levels of knockdown ranged from approximately 70% to 20%. Four different constructs each targeting the p38d and MAP3K4 genes were tested. Two of the p38d constructs resulted in knockdown of >95%. The remaining two p38d constructs, tested in triplicate samples, resulted in no discernable Ct being assigned following 45 cycles of amplification. This shows complete inhibition of the target gene, reducing mRNA levels to below the detection limit of the qRT-PCR technique. The MAP3K4 constructs resulted in silencing ranging from 42% to 74%. All experiments used cells infected with an empty vector control virus (Cat. No. SHC001V) as a negative control for expression changes.

We next wanted to determine the range of cell types that would be amenable to infection by this shRNA lentiviral library. We chose the gene JAK1 as our test target, and screened four potential JAK1 clones in A549 cells. The shRNAs targeting the JAK1 gene, when transduced into A549 cells, demonstrated varying levels of knockdown (Figure 2). Two of the constructs (TRCN0000003102 and TRCN000003105) reduced the endogenous level of JAK1 by more than 80%, while one construct (TRCN0000003104) inhibited about 75% of the message, and the fourth (TRCN0000003103) inhibited approximately 40%. With multiple shRNAs knocking down expression of JAK1 by 75% or more, there is a useful redundancy in reagents that can be utilized for proof of concept experiments. At the same time, there are shRNAs in the library that only partially reduce RNA levels of JAK1, allowing for examination of any hypomorphic phenotype associated with that gene. We utilized both GAPDH and cyclophilin as endogenous controls, and found the results to be very similar, indicating that either housekeeping gene is suitable for these experiments. 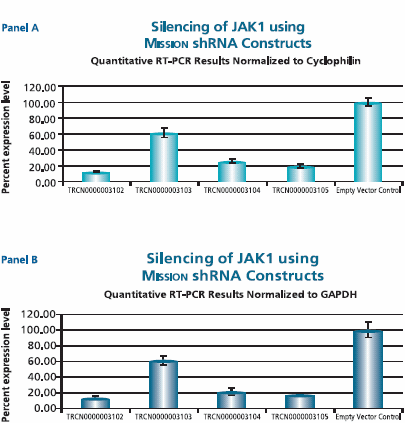 Figure 2.The Human Janus Kinase 1 (JAK1, NM_002227) MISSION shRNA set (4 individual hairpins) was used to generate lentiviral particles in packaging cells. A549 cells were transduced with the lentiviral particles containing the shRNA sequences. 140 hours post-infection, total RNA was purified and analyzed with the appropriate TaqMan™ Gene Expression assay. Results were normalized using GAPDH (Panel B) and cyclophilin (Panel A) quantitative RT-PCR results. The difference in Ct between infected samples and infected empty control cells, along with the efficiency of PCR, were used to generate percentage expression levels. 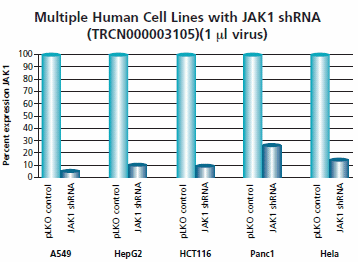 One clone (TRCN000003105) from the JAK1 set was chosen for subsequent use in four other cell types. In each case, the JAK1 clone was compared relative to the empty vector control. For each of the five cell types tested, similar knockdown of the target gene was observed (Figure 3). This shows the versatility of these viral particles over different cell lines.

The shRNAs found in the TRC library that target the various AKT isoforms yielded similar results in that infection of A549 with some shRNAs resulted in almost complete down-regulation of the target gene, while some yielded intermediary results (data not shown). Of particular note, however, is the specificity found within this library (Figure 4). The AKT1 targeting shRNA (TRCN0000010174) knocks down approximately 80% of AKT1 while leaving the other two isoforms relatively unaffected. The AKT2 targeting shRNA (TRCN0000000564) knocks out 75% of AKT2, but does not decrease the levels of AKT1 or AKT3. Similarly, our representative shRNA targeting AKT3 (TRCN0000010187) reduces endogenous levels of that gene by about 60%, but does not significantly affect the levels of AKT1 or AKT2. Note that the levels of each endogenous gene are normalized to the levels seen after transduction of the empty control vector. The specificity of these reagents clearly allows the examination of the effects of reduction of each AKT isoform, which is of significant importance in light of the relevance of this gene to multiple cellular processes (Fillmore, et al., Leuk Lymphoma 2005; Yuan et al., J Biol Chem 2005).

Astrocyte Culture: Primary-derived normal human astrocyte cells were obtained cryopreserved from Cambrex (cambrex.com). Cells were seeded at a density of 5,000 cells/cm2 in Astrocyte Basal Medium (Cambrex) and cultures established. At 70%-80% confluency, cells were trypsinized and reseeded into 96 well plates at 1.6 x 104 cells/well.

Other Cell Lines: Human cell lines were plated 24 hours prior to transduction in 96-well plates. Six microliters (μl) of virus (unless otherwise indicated) was added to each appropriate well along with hexadimethrine bromide (H9268) at a final concentration of 8 μg/ml. Each transduction was performed in triplicate. Transductions were conducted for approximately 30 hours at which time media containing the lentiviral particles and hexademethrine bromide was removed and replaced with fresh media containing the selective antibiotic puromycin (P9620) (concentration dependant on cell line). Media and selective antibiotic were replenished once more at 96 hours. Final cell harvest was 140 hours post-transduction.

Validation of Knockdown: Total RNA was purified and subsequently analyzed using the appropriate TaqMan® Gene Expression Assay (ABI). Master mixes were prepared using Sigma-Aldrich’s Quantitative RT-PCR ReadyMix (QR0200) supplemented with additional MgCl2 (M8787) to 4.875 mM and water (W1754). Reference dye was also added to all samples as an internal monitor for fluorescence. Total volume reactions (25 or 10 μl) were prepared with primer/probe mixes at 1x concentration for all analysis. Moloney Murine Leukemia Virus Reverse Transcriptase (M1302) was used for the reverse transcription portion of the reaction (15 units) and diluted in the provided buffer. Each sample was multiplexed in order to simultaneously measure the target as well as housekeeping gene levels. PCR conditions were as follows: 42 °C for 15 minutes; 94 °C for 3 minutes (initial denaturation and JumpStart Taq activation); and 45 cycles of 94 °C 15 seconds and 60 °C 1 minute, with data collection during the 60 °C extension portion, endpoint detection. All reactions were run and analyzed using Stratagene Mx3000 qPCR machine and software. Results were normalized for input RNA using GAPDH or cyclophilin. The difference in Ct between the infected samples and uninfected control cells, along with the efficiency of PCR, were used to generate percentage expression levels. Percentage is expressed as a level of the empty vector control, which is set to 100%.

RNA interference is developing into a revolutionary biological tool to study gene function and complicated pathways. It has the potential to alter the current landscape of drug discovery and therapeutics. The MISSION TRC shRNA lentivirus library can provide previously unavailable advantages to this area of study, such as excellent specificity to the target, high level of knockdown, and long-term gene silencing. Along with the ability of lentivirus particles to transduce difficult cell lines (astrocytes), this library will make an invaluable and comprehensive tool for the future of RNA interference.