Boron nitride nanotubes [(BNNT), Product No. 802824] are close structural analogs of carbon nanotubes [(CNT), Product No. 791431], which are high aspect ratio nanotubular material, where carbon atoms are alternately substituted by nitrogen and boron atoms. Both CNTs and BNNTs are considered the strongest light-weight nanomaterials with a Young’s modulus >1 TPa. The thermal conductivity of BNNTs is also similar to the thermal conductivity of aligned bulk single wall CNTs. However, unlike CNTs, BNNTs possess a much wider band gap (~5.5 eV), exhibit higher resistance to oxidation and show greater thermal stability. These properties render BNNTs appealing for the use in mechanical reinforcement applications, transparent bulk composites, high-temperature materials such as metal matrix composites (MMC), and radiation shielding. The main properties of both BNNTs and CNTs are compared in Figure 1. 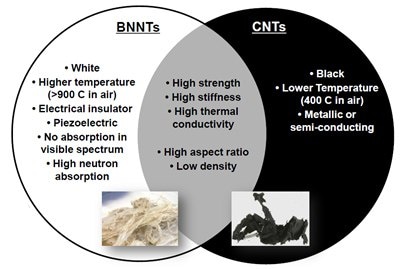 Figure 1.Comparison of the main properties of BNNTs and CNTs.

BNNTs were first synthesized in 1995 by the arc discharge method.2 Since then, other processes such as laser ablation, chemical vapor deposition, ball milling-annealing, pyrolysis, and arc-jet plasma have been explored for the synthesis of BNNTs. In recent decades, inductively coupled plasma (ICP) technology has been used for the synthesis of wide range of nanostructured materials.3-11 Among them, ICP has received considerable attention due to its ability to produce large volumes of high quality BNNTs.12-13 In the ICP technique, pure h-BN powder is vaporized in hydrogen-rich argon plasma where it decomposes into the constituent elements (B, N, and H). The presence of hydrogen in the reactant gases is crucial for achieving the catalytic effect. Its presence also eliminates the use of a metallic catalyst in the ICP process and results in very pure small-diameter BNNTs.

BNNT materials grown by ICP are collected in bulk masses13 from which BNNT fibrils can be separated (Figure 2a) and BNNT yarns can be drawn (Figure 2b). The slight beige coloring of the material shown in Figure 2 is attributed to the presence of small amounts of amorphous boron which can be effectively removed through post-processing.

Figure 2.(a) Fibril materials from which BNNT yarns (b) can be drawn.

Figure 3 shows some representative scanning electron microscopy (SEM) images of as-produced BNNTs using ICP. It can be noticed that the BNNTs synthesized by the ICP method consists of randomly oriented nanotubes. This is attributed to the fact that BNNTs synthesized by ICP are grown without a substrate. SEM analysis of individually isolated BNNTs suggests that they are typically of few microns in length.

The representative transmission electron microscopy (TEM) images of BNNTs are also shown in Figure 4. These images show that the ICP-synthesized BNNTs typically exhibit multiwall (2 to 5 walls) tubular structures and possess an average diameter of ~5 nm. Images also reveal that the BNNT walls are defect-free and the ICP synthesis indeed yields high quality BNNTs.

The optical properties of a ~0.2 µm-thick BNNT thin film characterized in the UV-Vis range are shown in Figure 5. A good transmittance is observed over a broad wavelength range. Also a strong absorption at ~200 nm, typical of hexagonal BN (h-BN) phase, can be seen. Such transparency of BNNTs in the visible range enables their incorporation in composites such as reinforced glasses where optical properties are of utter importance. 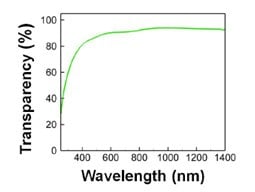 The thermal and chemical stability of BNNTs are exceptional. BNNT material is known to be air-stable in temperatures up to 900 °C and can withstand extended periods of harsh oxidizing conditions. This is illustrated in Figure 6 where the behavior of a folded piece of BNNT buckypaper exposed to a natural gas flame is compared to that of regular paper and CNT buckypaper.15 While the CNT can resist a few more seconds of exposure than regular paper before burning, the BNNT material is still intact after 150 seconds of constant natural gas flame exposure, demonstrating the non-flammable nature of BNNT material. 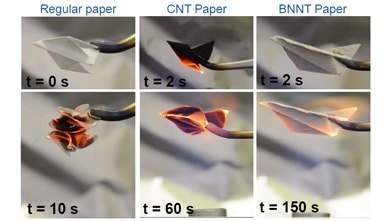 High stiffness and excellent chemical stability makes BNNTs ideal material for reinforcement in polymers, ceramics and metals. For instance, buckypaper-based BNNT/epoxy composites and polyurethane-modified buckypaper composites have been successfully developed.1,16 These composite materials exhibit Young’s moduli over twice the value for neat epoxy and 20 times the value for unimpregnated buckypaper. BNNTs are also one of the most promising classes of material for reinforcing aluminum-based structures.17 The low reactivity of BNNTs facilitates the integration of this material into an aluminum matrix where CNTs fail due to the reaction between the carbon and the aluminum which forms the undesired Al4C3 phase at the interface. BNNTs also exhibit much higher oxidation temperature (~950 °C) than the melting point of aluminum (660 °C), which enables the homogenous dispersion of BNNTs directly into the aluminum melt. Since BNNTs retain their mechanical properties at high temperatures while having a very low density, the development of new temperature-resistant lightweight MMC is achievable. BNNTs also exhibit good thermal conductivity. This renders them useful for applications in nanoelectronics where heat dissipation is critical. This also makes BNNTs multifunctional as it not only improves the stiffness of composites but also yields high thermal conductivity along with high transparency. The combination of high stiffness and high transparency is already exploited in the development of BNNT-reinforced glass composites.18 Other intrinsic properties of BNNTs such as good radiation shielding ability,19 high electrical resistance and excellent piezoelectric properties are likely to promote interest for integrating them in new applications.

Due to the limited availability of BNNTs, applications involving them are still being developed and to this end the synthesis of BNNTs using ICP appears promising as it allows the production of high quality material at a larger scale. The availability of high-quality BNNTs in larger quantities to the scientific community will help drive more in-depth studies of the unique properties, as well as accelerate the development of new applications.