With Voyager 1 beyond the frontiers of our solar system

For more than 40 years, the first generation of the carbon molecular sieve Carbosieve has been helping to gather scientific data on board the Voyager probes. Supelco® portfolio's first “astronaut” has laid the foundation for many other developments and innovations in the company. 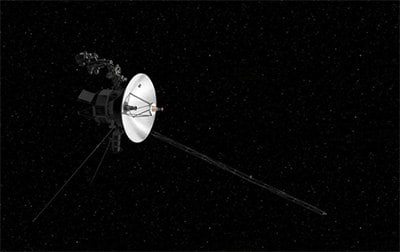 One of the Voyager spaceprobes - (Credit: NASA)

When Voyager 1's sensors sounded the alarm, the excitement at NASA's Jet Propulsion Laboratory in Pasadena, California, was palpable: The space probe had not transmitted an unexpected signal for years. Then, on August 25, 2012, the number of solar wind particles measured suddenly plummeted by a factor of 1,000, while the concentration of interstellar particles from cosmic rays rose by almost ten percent. Voyager 1 had obviously just passed the outer frontier of our solar system, also called the heliopause.

No other man-made object had ever traveled farther from Earth. A historic moment. But not only for NASA. The space probe also carries a product designed by the Supelco® team in Bellefonte, Pennsylvania. “We are very proud that our Carbosieve is still working flawlessly,” says William “Bill” R. Betz, head of the Particle Design group at the science and technology company Merck. Developed in the early 1970s, the special carbon molecular sieve still plays a crucial role today, more than 40 years after the launch of Voyager 1, in providing scientific data that is helping to broaden our view of the solar system and satisfy our inherent human curiosity about the nature of the universe. The first generation of the Carbosieve series also paved the way for a host of innovations in the field of carbon-based adsorbents in the Supelco® portfolio.

Today, the high-tech materials from the original Carbosieve series are used as collection media in air flow meters or to improve the efficiency of packings in solid phase extraction hardware, purge-and-trap systems, and gas chromatography columns. The descendants of the original Voyager passenger now also purify gases or liquids and separate synthesized compounds from reaction mixtures.

The original Carbosieve had performed similar tasks. However, compared to the current state of the art, they were less selective, had poorer kinetics, and often only permitted the adhesion of relatively large molecules such as oxygen, nitrogen, or carbon dioxide to their surfaces.

The search for an adsorbent for extremely small molecules

For Voyager 1 and its sister probe Voyager 2, NASA was looking for an adsorbent that would work as efficiently as possible for especially small molecules. The scientists were mainly interested in hydrogen and its isotopes deuterium and tritium, as well as helium and the lithium-7 isotope: elements formed at the moment of the Big Bang. Among other things, Voyager was meant to measure the hydrogen isotope ratios to test the Big Bang theory, which was advanced in 1966.

It was clear to the researchers that the tiny carbon-coated polymer beads used for these and similar measurements in previous space missions were not sufficient. Since the Supelco® portfolio had already made a name for itself in the development of adsorption materials at that time, NASA called Bellefonte. NASA wanted to know whether adsorbents might be available that would work with such molecules but would still be stable enough to withstand the strong vibrational forces generated when a Titan Centaur rocket was launched.

People still tell stories about that call and the stunned faces of their colleagues at headquarters, says Betz. Naturally, the Supelco® team delivered. It’s Carbosieve design at the time had a minuscule average pore size of 0.7 nanometers, so it was already capable of adsorbing small molecules. In addition, the carbon molecular sieve particles were highly pure, ultra-strong, and showed no signs of aging: “The adsorbent withstood enormous pressure forces in excess of 1100 bar without damage,” says Betz.

This means that, theoretically, it could have been put to use at the bottom of the 11,000-meter-deep Mariana Trench. This was the first sign that NASA was on the right track with Carbosieve – after all, similar hostile conditions exist in the deep sea as in space. The space agency bought five grams of the adsorbent and started their tests. “It wasn't exactly a major transaction,” laughs Betz. “But the accolade of supporting NASA in the exploration of space was much more valuable to us anyway.”

Important insights into the chemical composition of our solar system

As we know today, Voyager 1 and 2 did indeed create a scientific sensation: They discovered 22 moons altogether, three each around Jupiter and Saturn, ten around Uranus, and six around Neptune. They also discovered further rings around Jupiter, Uranus and Neptune and, with the help of Carbosieve as a collection medium in the mass spectrometers of the space probes, provided important insights into the chemical composition of the planetary atmospheres. Betz still remembers the first data on hydrogen isotopes. “That was thrilling for us.”

Yet the Supelco® expert would much rather have supplied the NASA team with a customized carbon molecular sieve. After all, taking on scientific challenges, in the full spirit of curiosity, and puzzling over them until customers are satisfied was then and still remains the specialty of the Supelco® Particle Design group.

The start of long-term cooperation

We’ll say this much: It wasn’t the last time NASA dialed the number of the Supelco® team. The Particle Design group still had its chance to prove itself. But that’s another story, about the new generation of carbons, termed Carboxens, on the Cassini Huygens mission and on the International Space Station (ISS). Meanwhile, the two Voyager probes diligently continue to transmit data from interstellar space. It is estimated that we will still have contact with the somewhat slower-flying Voyager 2 until 2025.

All but one or two scientific instruments have to be shut down to be able to continue measuring data until then. This will prolong the life of the atomic batteries on board. For their last mission, however, the two probes need neither radio contact to Earth nor a full battery. Each of them carries a gold-plated copper record in a protective aluminum jacket. In addition to a star map of our solar system, it contains greetings, music, sounds, and images of the Earth.

Whether aliens will really like Chuck Berry's song “Johnny B. Goode,” which is included on the record, or perhaps even marvel at the Carbosieve powder with pores accurate to tenths of a nanometer, we'll probably never know: It will take several hundred thousand years for the probes to reach a place where life might exist.