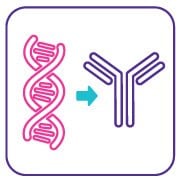 Characterizing your biotherapy through the development process requires advanced technologies and expertise. Our comprehensive program combines physicochemical and structural information with the activity profile captured from binding, affinity, and potency bioassays to better understand the function and critical quality attributes of your drug. All testing is compliant with ICH guidelines, as well as FDA and EMA regulations.

Whether you are testing cell pools or isolated clones, we have an assay to suit the level of characterization you require depending on your stage of development:

Binding affinity to target: Understanding the binding affinity of your mAb with its intended target is an early indicator of generic binding function. Surface plasmon resonance (SPR) is the gold standard in rapid and high throughput binding analysis, providing detailed kinetic information on the nature as well as strength of binding.

N-glycan analysis: Highly variable glycosylation may impact mAb purity and produce variable function. Monoclonal antibodies carry N-glycans on their backbone that can be released using LC-MS to assess glycosylation patterns. Understanding these N-glycan pathways is important because N-glycans affect many properties of glycoproteins including their conformation, solubility, antigenicity, and recognition by glycan-binding proteins.

Intact mass: Intact molecular mass analysis is commonly used to demonstrate the diversity of the protein/peptide products and verify the identity of the biologics. With optimization, it can also determine the intact molecular weight of all protein products, including bispecific monoclonal antibodies.

Binding via surface plasmon resonance (SPR) scan or ELISA: Variability of a molecule's physicochemical and structural properties creates diversity in the Fc region of the antibody. Structural differences can influence the binding activity with Fc receptors expressed on immune cells which in turn influences the antibody’s effector function and can therefore have a great impact on potency if effector mechanisms are important for mechanism of action.

To discuss your cell line development needs and take the next step in securing the future of your biotherapy, fill out the form below.

Fields indicated by an * are required.