Fast Extraction and Low Level Detection of Chloramphenicol in Shrimp

Chloramphenicol is a broad spectrum antibiotic that has been determined as a causative agent of aplastic anemia and possible carcinogen in humans. These health concerns prompted a ban on the use of chloramphenicol in animal products including farmed fish and shrimps. As of today, a “zero” tolerance level has been established for this antibiotic; however, the drug is still widely available in developing countries, and no “safe” residue levels have been determined in food1. Therefore, a highly selective and sensitive analytical assay to control and monitor chloramphenicol residues in difficult matrices, such as food stuffs, is needed.

The QuEChERS (Quick, Easy, Cheap, Efficient, Rugged and Safe) technique is rapidly becoming a universal sample preparation approach for a variety of analyte classes and a variety of matrices2-4. In this study, several different QuEChERS sorbents were used in the sample cleanup procedure of shrimp samples prior to chloramphenicol analysis. Analyte recovery, reproducibility and ionization effects were compared.

Multiple replicates of both unspiked and spiked extracts at 0.3 ppb were processed. All samples were analyzed by LC-MS/MS using negative electrospray ionization (ESI). Resulting samples were quantified with the use of solvent calibration standards and a matrixmatched calibration curve to identify matrix effects.

Figure 1 demonstrates the differences in pigment removal for the various sorbents. In Figure 1a, the lack of color in the extracts shows that Z-Sep+, C18 and Z-Sep all effectively removed pigment from the shrimp matrix. Also, as seen in Figure 1b, samples that were extracted without the application of a cleanup sorbent produced precipitation over time. Therefore, the use of QuEChERS sorbents is essential for the removal of both interfering pigments as well as solid matrix components in shrimp samples.

Figure 1.Comparison of Shrimp Extracts with and without QuEChERS Cleanup

Figure 2 charts the comparison of analyte recovery and percent relative standard deviation (%RSD) using matrix matched calibration standards and external solvent calibration standards. As illustrated, the overall chloramphenicol recoveries were within an acceptable range (greater than 97%) for the variety of cleanup methods used. However, as indicated by the error bars, Z-Sep+ gave more reproducible results than the other dispersive sorbents.

Figure 3 demonstrates the ionization effects for each cleanup procedure by deviation from the solvent calibration curve. Matrix suppression was evident for the acetonitrile extraction where QuEChERS cleanup was not performed. Matrix enhancement was observed for the C18 cleanup method. A chromatogram of a 0.3 ng/g chloramphenicol spiked shrimp sample is shown in Figure 4. 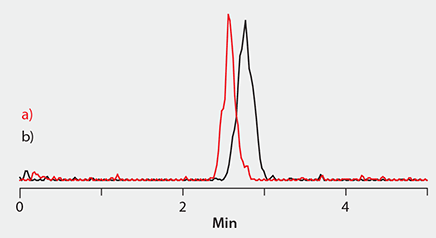