Physical Stability of a Gel Filtration Column for Antibody Analysis

Independent of the mode of liquid chromatography, the lifetime of an HPLC or UHPLC column depends on the characteristics of the packing material, how that material was packed into the column and how the column was subsequently used by the operator. Clearly, when the structure of the packed column limits its use to a restricted set of chemical, physical or instrumental conditions, the operator needs to ensure that these limits are not exceeded during operation.

Most HPLC practitioners became experienced in their trade by working with reversed phase (RP) columns. The physical and chemical limitations of these columns are well known and the (relative) stability of RP columns has become the baseline when HPLC users think and talk about column lifetime. This practical knowledge about column stability needs to be relearned when working in other modes of HPLC, such as HILIC, ion exchange or size exclusion chromatography.

From a user’s perspective, it would be most desirable if no precautions would be required to obtain a long column lifetime. From a manufacturer’s perspective, such a column would be impossible to make and even if it could be made, such a column would be too costly to sell. Particle structure, bonded phase composition, number of injections, mobile phase, pH, flow rate, sample type/mass/volume, temperature, pressure, storage, cleaning protocol, etc. – all play a more or less important role in determining when to write the column’s inevitable obituary.

When it comes to gel filtration chromatography, particle stability and thus column stability is more of an issue than in reversed phase chromatography for the simple reason that the pore volume of SEC columns is maximized to provide optimal mass resolution, and the higher the pore volume, the more fragile the particle.

When scientists at Tosoh Bioscience initiated a study on the stability of the TSKgel® G3000SWXL gel filtration column, they considered that column stability, among the many factors listed above, could also depend on the lot of silica and the bonding lot. Thus, they exposed columns from different silica and bonding lots to a series of repetitive injections of standard proteins using mobile phase conditions that are typical for the quality control analysis of monoclonal antibodies. To demonstrate that when using normal care to prepare the mobile phase and sample solution the columns would show satisfactory lifetime, they did not protect the analytical column with a guard column nor with inline filters other than the ones that are a standard fixture in the HPLC system they used.

In this study, we report on variations in column efficiency, peak symmetry, and retention when making 1,000 injections of a 10 µL standard mixture of globular proteins on five TSKgel G3000SWXL columns operated under standard operating conditions used in the quality control of monoclonal antibodies in therapeutic preparations.

All chemicals and standards were obtained from Sigma-Aldrich and were of electrophoretic or analytical grade. High-purity HPLC grade solvents were used for the preparation of stock standards, samples and mobile phases.

The preliminary results of the Tosoh Bioscience study were presented in a poster at ISPPP 20111. Based on five TSKgel G3000SWXL columns tested, each column was stable for at least one thousand 10 µL injections of a protein standard mixture in 0.1 mol/L, pH 6.7 phosphate buffer containing 0.1 mol/L sodium sulfate and 0.05% sodium azide, operated at 1 mL/min at room temperature.

Table 1 contains results for column S1261 from silica lot A, bonding lot 09R. Retention times (min), column plate numbers and peak symmetry values for γ-globulin and p-aminobenzoic acid were found to be stable from the first till the 1,000th injection.

Table 1. Retention, Efficiency and Peak Symmetry at the 1st, 500th and 1,000th Injection

Table 2 shows that the relative standard deviations in retention, efficiency and peak symmetry for 100 injections (each tenth injection from # 10 to # 1,000), were well within the acceptable range.

The data presented in Tables 1 and 2 were obtained from chromatograms such as those shown in Figures 1, 2 and 3. Figure 1 shows the overlay of the first and 1,000th chromatogram on column S1261. Although some peak height changes can be observed, each component elutes in the same retention window and the shape of each peak in both chromatograms is similar.

The chromatogram overlay in Figure 2 shows that each of the three columns from silica lot A, bonding lot 08R, provide almost identical chromatograms, in this case for the 250th injection on each column. Since the chemical and physical characteristics of the packing material in the columns are the same, these results are not unexpected, although they do demonstrate that the columns were not only fully functional after 250 injections, they are also a testament of the high degree of reproducibility of the packing procedure of the TSKgel G3000SWXL columns. 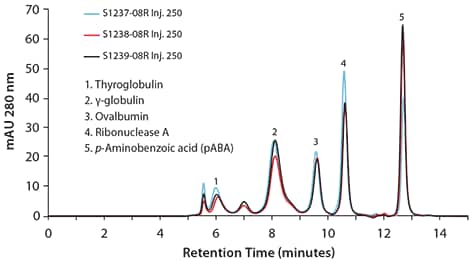 Finally, Figure 3 shows the loading capacity of a TSKgel G3000SWXL column for successive injections of 40 µg and 400 µg of a commercial monoclonal antibody preparation. The inset shows the details such as dimer and higher order aggregates as well as mAb fragments. 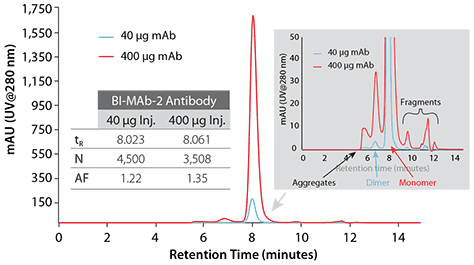 The preliminary results of this column stability show that all five TSKgel G3000SWXL columns tested were stable for at least one thousand 10 µL injections of a protein standard mixture in 0.1 M, pH 6.7 phosphate buffer containing 0.1 M sodium sulfate and 0.05% sodium azide, operated at 1 mL/min at room temperature. The efficiency (N) and peak symmetry (AF) values showed minimal variation from the first to the last (1,000th) injection indicating that the integrity of the packed bed was maintained throughout the experiment. Retention times of globular protein standards did not change while pumping 15 L mobile phase through the column, indicating that the integrity of the diol-bonded phase was maintained throughout the experiment.

TSKgel is a registered trademark of Tosoh Corporation