In pharmaceutical bioanalysis, researchers develop and run various assays to quantitate drugs, pharmaceutical candidates, and their metabolites in biological fluids such as serum or plasma. The data resulting from these assays are used to help determine the pharmacodynamic and pharmacokinetic properties as well as the toxic and therapeutic concentrations of existing and emerging pharmaceutical compounds. Although advances in LC-MS technology have reaped overwhelming benefits in terms of increased throughput and sensitivity, good sample preparation continues to be a critical component of bioanalysis.

Excessive background from endogenous matrix components has always been a greater concern in bioanalysis, and has become paramount with decreasing analytical run times. In bioanalytical mass spectrometry, the issue of excessive background contributes to the growing problem of ion-suppression.

Ion-suppression is caused by one or more interfering components or species that co-elute with analyte(s) of interest during LC-MS analysis and manifests itself as a loss of analyte response. These co-eluting species can affect droplet formation or ionize concurrently resulting in an erroneous decrease (suppression) or increase (enhancement) in signalresponse. The end result is poor assay reproducibility, accuracy, and sensitivity. Such deleterious effects are often most notable at the lower limits of quantiation (LLOQ).

One of the major causes of ion-suppression in bioanalysis is the presence of phospholipids during LC-MS analysis in the positive ion electrospray mode (+ESI). Phospholipids are prevalent in extremely high concentrations in blood based biological fluids (~1 mg/mL); and represent the second largest lipid component in biological matrices after triglycerides. Figure 1 compares the LC-MS chromatograms of two clonidine spiked rat plasma samples processed by standard protein precipitation alone and protein precipitation followed by phospholipid removal. When standard protein precipitation was employed, severe signal suppression of clonidine was evident. In contrast, by removing phospholipid interferences prior to analysis, response for clonidine was nearly doubled.

Why are Phospholipids Difficult to Remove During Sample Prep?

When processing plasma/serum samples for LC-MS, the three most common sample prep techniques are protein precipitation (protein ppt), liquid-liquid extraction (LLE), and solid phase extraction (SPE). Each technique offers unique advantages that are considered during the method development process. For example, protein ppt methods are simple (2-3 steps), fast, and often require no method development. However, the technique offers minimal selectivity as it only removes gross levels of protein from the sample prior to analysis. In contrast, SPE offers significant benefits in terms of selectivity/sample cleanup, but the technique requires moderate to extensive levels of expertise and time for adequate method development. In addition, SPE often requires multiple steps (5-8) resulting in increased assay time.

Due to the nature of phospholipids, none of the mainstream sample prep techniques (protein ppt, LLE, and SPE) offer the proper selectivity to distinguish phospholipids from analytes of interest. Figure 2 describes this phenomenon. 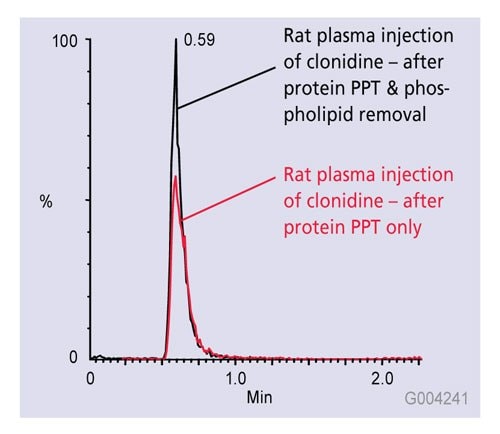 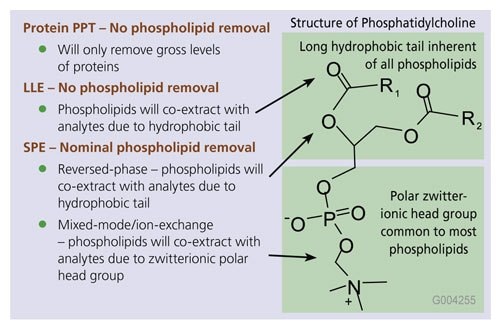