HomeSolid Phase Microextraction (SPME)SPME in the Analysis of Illicit Drugs

SPME in the Analysis of Illicit Drugs

Forensic chemists are often called upon to perform determinations that include the analysis of unknown substances or biological fluids for the presence of illegal drugs. Many of these drugs can be analyzed by GC, either directly or in their derivatized forms; and when mass spectral detectors are used, positive identification and low levels of detection are possible. To enhance low-level detection, solid-phase microextraction (SPME) can be used as part of the sample preparation process. In this article, we will discuss the use of SPME for the extraction and analysis of amphetamines and other drugs of abuse.

SPME has been used extensively for the analysis of amphetamines in the urine. In this study, we examined its utility for the extraction of amphetamine compounds from plasma. This application could be useful in toxicology laboratories involved in postmortem drug testing. Also, the technique is suitable as a confirmation tool for clinical and forensic cases.

Rat plasma was spiked at 50 μg/L with several species of amphetamine compounds, including the precursor's ephedrine and pseudoephedrine. A summary of the sample preparation procedure, including SPME conditions, is presented in Table 1. The ethyl chloroformate derivatization reagent was added directly to the plasma sample/buffer mixture. The mixture was vortexed for 1 min, and extraction performed by heated-headspace SPME. The analysis was done by GC-MS/SIM on an SLB-5ms capillary column.

Due to the presence of an amine group in their structure, amphetamines are difficult to analyze by GC without derivatization. There are several different methods for derivatizing amphetamines. Ethyl chloroformate reacts with the amine group in amphetamine compounds to form carbamates, which are compatible with GC analysis. An example of this is illustrated in Figure 1 with amphetamine.

The derivatization reaction is unaffected by water, thus it can be done in an aqueous environment such as plasma. This allowed the derivatization reagent to be added directly to the buffer/plasma sample, and eliminated the need for the drying step that is often necessary prior to using other types of reagents.

A chromatogram depicting the analysis of an extracted plasma sample is presented in Figure 2. Good response was obtained for all compounds, with matrix interference from the plasma minimized by the use of headspace SPME. Both pseudoephedrine and ephedrine yielded multiple derivatives with the ethyl chloroformate reagent, and the largest peak, resulting from the expected carbamate derivative, was chosen for the analysis.

Analysis of Other Drugs of Abuse

The speed and ease of SPME give it utility as a screening tool in many field applications. In the case of drug analysis, there is interest in using it in combination with a portable GC-MS unit to extract and identify illegal drugs present in unknown powders found at crime scenes. In many instances, it may be necessary to test for several different types of drugs. In this study, we examined the utility of SPME for extracting a varied array of drugs of abuse and compared the results obtained with several different fiber chemistries.

The drugs chosen for this study include common psychotropic, stimulant, opiate, and hallucinogenic compounds. All can be analyzed by GC without prior derivatization, and were extracted in their native forms. Phosphate buffer (50 mM) containing 25% NaCl at pH=11 was spiked at 500 μg/L with each compound. (Higher recovery was observed for some of the drugs from basic solutions, compared to neutral and acidic solutions). The sample was then extracted by immersion SPME, with stirring, for 15 min. The analysis was done by GC-MS, in full scan mode, using an SLB-5ms capillary column.

The extraction and analysis were performed using several different fiber chemistries, ranging from nonpolar to polar. A comparison of the absolute responses obtained for each compound between the two fibers is depicted in Figure 3. Phencyclidine responded well with all fiber types, and for reasons of scale, is not included in Figure 3. No one fiber was found to give optimal response for all compounds. As expected, the nonpolar PDMS fibers were best able to extract the less polar analytes and worked best for PCP, cocaine, diazepam, and heroin. Clonazepam, followed by LSD, was the lowest responding compound. The highest response for LSD was seen with the 30 μm PDMS fiber, indicating that desorption rather than extraction was the issue for this compound. The thinner coating on the 30 μm PDMS fiber may have allowed for more efficient desorption of this heavy compound than the 100 μm PDMS fiber. The analysis resulting from the extraction with the polar polyacrylate fiber is presented in Figure 4. Clonazepam's response was the greatest with the polyacrylate fiber (PA), and LSD exhibited some response with this fiber as well. The other compounds showed reduced response on the polyacrylate compared with the less polar fibers, but enough that all were easily detectable at 500 μg/L. 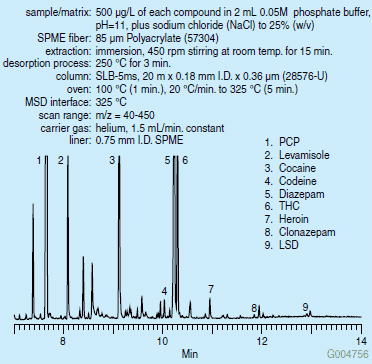 We have shown SPME can be used in the analysis of amphetamine compounds by doing a pre-extraction derivatization. If ethyl chloroformate is used as the derivatization reagent, the reaction can be done directly in an aqueous environment, and by doing headspace; the method can be applied to challenging biological matrices such as plasma.

SPME can also be used in general determinations of other drugs of abuse. When extracting differing species of drug compounds, such as those often determined in a basic drug screening analysis, fiber chemistry should be considered. The polyacrylate fiber shows the most promise for use as a general “screening” fiber for this type of application. Other fiber types may be useful if it is necessary to optimize a method for specific drug compounds.