Terpenes comprise the largest and most diverse class of secondary metabolites; approximately 55,000 compounds have been identified to date.1 While the enzymes responsible for terpene synthesis are found in all classes of microorganisms, plants, and animals,2,3 the widest array of terpenes and terpene-derived structures are synthesized by higher plants.4

Terpenes are isoprenoids. All classes of terpenes are synthesized from C5 isoprene units that have been linked end-to-end. In some terpenes, the isoprene backbone is easily identified, such as in the acyclic compounds phytol and squalene, or the long chain carotenoids. However, most terpenes have been enzymatically rearranged and substituted to form highly complex ring structures.1,5,6

The basic building blocks of all terpene constructs are isopentenyl diphosphate (IPP) and dimethylallyl diphosphate (DMAPP). Vertebrate and invertebrate animals synthesize these isoprenoid precursors from acetyl coenzyme A via the mevalonic acid pathway, a critical pathway for the synthesis of cholesterol and the farnesyl and geranylgeranyl precursors for protein prenylation.

This pathway is also an important source of IPP and DMAPP in the cytoplasm of plant cells.4,6 As in animals, statins, including mevinolin, mevistatin, pravastatin, and simvastatin, block the rate-limiting step in this pathway, the conversion of 3-hydroxy- 3-methylglutaryl coenzyme A (HMG-CoA) to mevalonic acid by HMG-CoA reductase. However, while statins block the production of phytosterols in plants, they do not prevent the production of terpenoids in plastids. In 1999, Rohmer7 described a second independent pathway for the synthesis of isoprenoid precursors, the DOXP-MEP pathway, that is expressed in the plastids of plants, green algae, some bacteria, and apicomplexan parasites such as the malaria parasite Plasmodium. The initial step in this pathway, the conversion of pyruvic acid and D-glyceraldehyde 3-phosphate to 1-deoxy-D-xylose 5-phosphate (DOXP) by DOXP synthase, was long known to be involved in the synthesis of the B-complex vitamins, thiamine and pyridoxal, but its central role in the production of plant terpenes was elucidated only in the past decade.2-4,7 This pathway is inhibited by fosmidomycin, which blocks the conversion of DOXP to 2C-methyl-D-erythritol 4-phosphate (MEP) by DOXP reductoisomerase. The two pathways for the production of IPP and DMAPP are outlined in Figure 1. 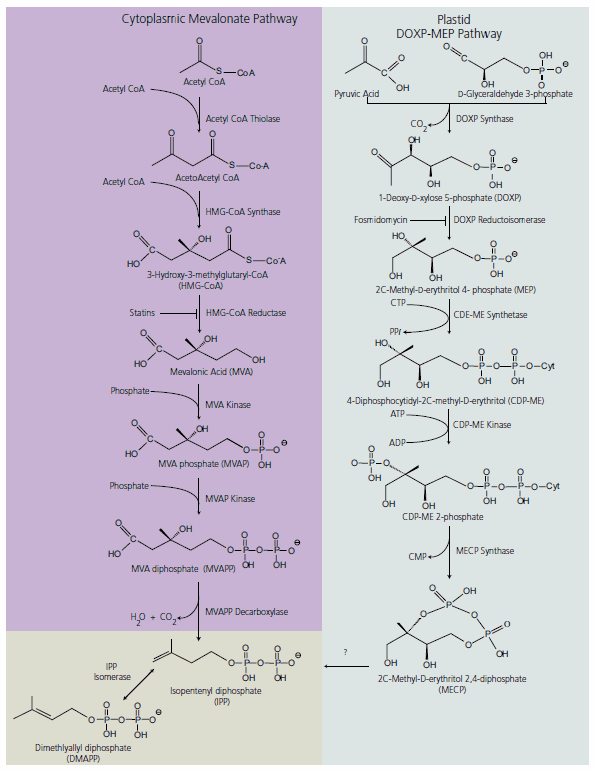 Figure 1.The cytoplasmic mevalonic acid pathway (purple box) and the plastid DOXP-MEP pathway (green box) for the synthesis of the terpene precursors isopentenyl diphosphate (IPP) and dimethylallyl diphosphate (DMAPP). The formation of IPP and its isomerization to DMAPP (brown box) occurs independently in both the cytoplasmic and plastid compartments.

Monoterpenes, sesquiterpenes, diterpenes, and carotenoids are primarily products of the plastid DOXP-MEP pathway. Monoterpenes and sesquiterpenes are often flavor and fragrance components of essential oils. In contrast, the carotenoids are yellow to red plant pigments, while the photosynthetic green pigment chlorophyll is composed of a Mg2+-containing chlorin ring and a long side-chain containing the acyclic diterpenoid, phytol. The triterpenoids and their derivatives, the phytosterols and saponins are produced via the cytoplasmic mevalonic acid pathways and are often components of cell membranes. Some sesquiterpenoids and the isoprenoids involved in the prenylation of ubiquinone and other proteins are also products of the cytoplasmic synthetic pathways.3 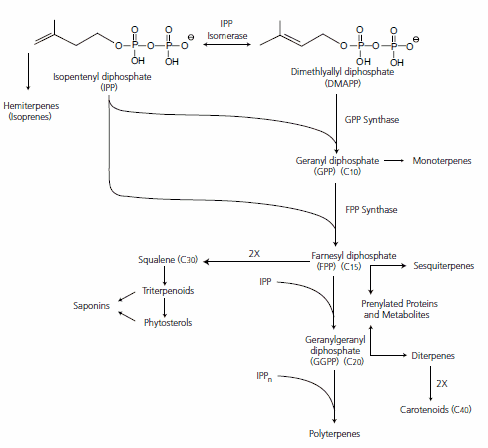 Not only do terpenes demonstrate broad structural diversity, but they also exhibit a wide array of biological actions. For example, the sesquiterpene abscisic acid and the diterpene gibberellins are plant hormones and growth regulators. Plant essential oils are complex mixtures of volatile monoterpenes and sesquiterpenes as well as non-terpene phenolics and aliphatic esters, ketones, and alcohols.8,9 These volatile odorants along with plant pigments10 attract animals and insects that are vectors for pollination and seed dispersal. Essential oil components also protect plants from disease, infestation and predation. Essential oils have been shown to have antimicrobial, antiparasitic, insecticidal, and antioxidant/ prooxidant activities that often represent the combined bioactivity of multiple components.8,11,12 Volatile compounds released following herbivore-induced tissue damage may summon protective carnivores or act as chemical signals to neighboring plants to induce the expression of defense genes.13

Many terpenoids have toxicities and other actions that suggest a protective function against parasites or animal predators. For example, the atractylosides are metabolic poisons that inhibit the mitochondrial adenosine nucleotide transporter.14 The antimalarial activity of artemisinin appears to be related to the generation of reactive oxygen radicals by electron transport chain enzymes and mitochondrial membrane depolarization that results in a disruption of mitochondrial function.15 The limonoid triterpenes azadirachtin and limonin are potent antifeedants and insecticides, while gossypol inhibits insect reproduction as well as mammalian spermatogenesis, perhaps by inhibiting connexin43-mediated gap junction intercellular communication.16 The licorice triterpene glycyrrhetinic acid also inhibits connexin43-mediated gap junction communication.17 Glycyrrhetinic acid is the aglycone of glycyrrhizic acid; both compounds are potent inhibitors of type 2 11β-hydroxysteroid dehydrogenase and the synthesis of corticosterone and aldosterone. Inhibition of this pathway allows the cellular accumulation of cortisol, a glucocorticoid that also activates renal metallocorticoid receptors, leading to the retention of Na+ and water and an increase in blood pressure.18-20

Many plant terpenoids are cytotoxic to tumor cells, making them useful chemotherapeutic or chemopreventive compounds. Paclitaxel (Taxol®) and related taxanes are the most well-known anticancer agents. These compounds bind to tubulin and stabilize microtubles, thus inhibiting cell division.21 The anticancer activities of limonene, perillic acid, and farnesol are related to the inhibition of geranylgeranyl and farnesyl protein transferases and protein prenylation.22-25 In contrast, parthenolide inhibits IKK and blocks the activation of NF-κB-induced cell survival pathways.26-28 The antiproliferative action of cucurbitacin I may be due in part to its inhibition of STAT3 mediated gene activation.29 Betulinic acid promotes apoptosis by inducing the mitochondrial permeability transition.30

Some plant terpenoids have activities that make them useful research tools. Mezerein and the phorbol esters activate protein kinase C isoforms through the diacylglycerol regulatory site and are potent second stage tumor promoters.31,32 Forskolin activates adenylyl cyclase and has been used to study the role of these cyclases and of cyclic AMP in neural and cardiac function.33 Steviol inhibits the renal organic anion transporters and has been used to study the renal clearance of drugs.34 Several mono and sesquiterpenes, including limonene, geraniol, menthol, and farnesol enhance the transdermal penetration of compounds and are useful in developing new drug delivery systems.35-38 Saponins are triterpenoid or steroid glycosides that possess mild detergent properties. While some triterpenoid saponins demonstrate anticancer, immunomodulatory or cholesterol lowering activities,39,40 they are also useful as adjuvants in oral vaccines and in the formation of emulsions.41 Saponins can enhance transmembrane ion flux and increase membrane permeability to proteins, polysaccharides and other molecules.42-43

This review has merely suggested the wide diversity of action of terpenoids in biological systems. Many monoterpenes and sesquiterpenes activate cutaneous transient receptor potential (TRP) channels that mediate the sensations of touch, temperature, and pain, in addition to activating olfactory and taste receptors. The sweet diterpenoid glycoside, stevioside, the tetraterpene carotenoid provitamins and the diterpene retinoid vitamins and their derivatives are discussed in other reviews within this issue of BioFiles. Other members of these groups modulate neurotransmitter receptors, transporters, or ion channels, thus affecting neuronal, cardiac, or muscular function. Others have immunomodulatory or anti-inflammatory actions.