In this study, chromatographic screening studies for the analysis of vitamin D metabolites were expanded to include dihydroxymetabolites along with 25-epi-homologs (Figure 1). Screening consisted of evaluating various column stationary phases, organic modifiers and buffers for the resolution of critical pair isobaric compounds. The goal was to develop chromatographic conditions for the quantitation of hydroxy and dihydroxy vitamin D2 and D3 metabolites, including the isobaric epimers, from human serum samples. In addition to chromatographic method optimization, sample preparation techniques were evaluated to determine the impact of biological matrix on the sensitivity and accuracy of the LC-MS method. 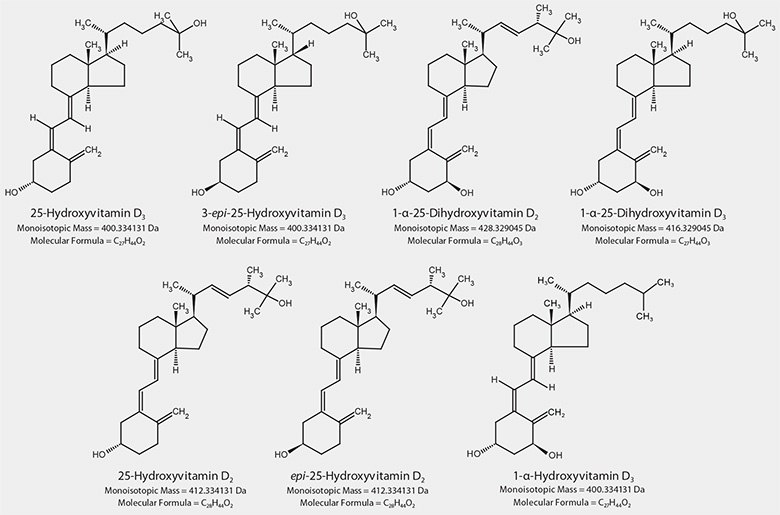 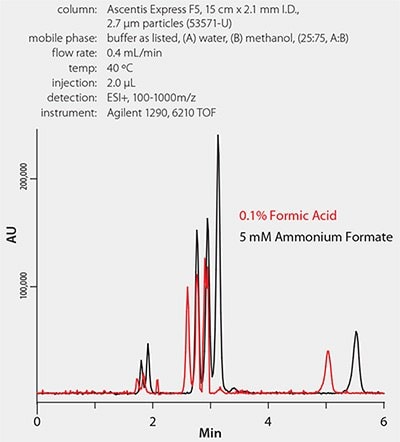 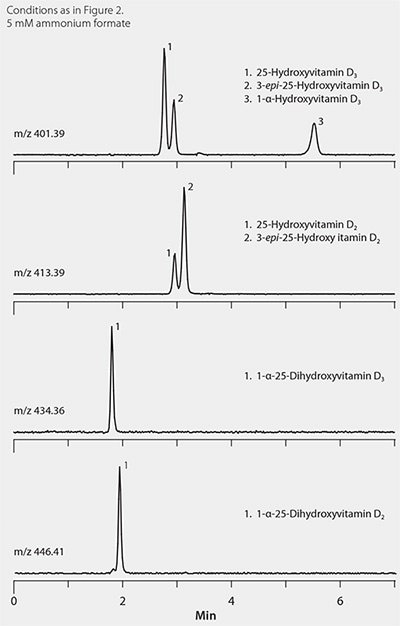 Human serum samples were spiked at 25 ng/mL with vitamin D metabolites. Protein precipitation was performed offline by adding 100 μL of spiked serum followed by 300 μL of 1% formic acid acetonitrile to a 96-well collection plate. Samples were thoroughly mixed by performing five 300 μL draw/dispense cycles using a digital pipette. Samples were then left to sit for 5 minutes before transferring 200 μL of the resulting supernatant into a HybridSPE® PLus 96-well plate. Samples were passed through the HybridSPE® PLus plate by applying 10” Hg vacuum for 4 minutes and analyzing the resulting filtrate directly. As a comparison, spiked human serum was also processed using standard protein precipitation alone by adding 100 μL of serum followed by 300 μL of 1% formic acid acetonitrile into 2 mL centrifuge vials. Samples were then vortexed and centrifuged, and the resulting supernatant was analyzed directly. 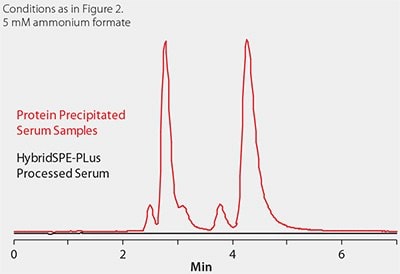 Chromatographic resolution still plays an important role in LC-MS applications when dealing with isobaric compounds. The unique selectivity of the Ascentis® Express F5 column gave a fast and efficient analytical method for 25-hydroxyvitamin D and related forms from serum samples. In addition, phospholipid depletion using the HybridSPE®-PLus 96-well plate enabled efficient sample cleanup increasing method reproducibility and accuracy. As demonstrated in this study, this novel sample prep technique coupled with the unique selectivity of the Ascentis® Express F5 column enables a fast and simplified bioanalytical method for associated vitamin D metabolites. Likewise, this approach demonstrates how selectivity, in both chromatographic and sample preparation steps, allows for efficient analysis that would otherwise be unattainable with traditional reversed-phase approaches.