Three step-by-step protocols for the monitoring of critical quality attributes (CQAs) of monoclonal antibodies were developed using adalimumab as an example. Monoclonal antibodies are glycoproteins used as drugs in the treatment of a variety of cancers and immune system disorders. These large biomolecules have complex structures making thorough characterization essential to ensure the safety and efficacy of drugs. Here, we provide an overview of the different workflows that can be used in these molcules intact and reduced mass analysis, primary structure determination (i.e. peptide map), and N-linked glycan analysis to enable an accurate characterization of their CQAs.

Increasing importance of monoclonal antibody (mAb) therapeutics has fundamentally changed the pharmaceutical market in recent years. These macromolecules are used in cancer therapies and in combating autoimmune and other diseases. Biomolecules are produced using recombinant techniques in mammalian cell lines, expressing the mAbs in large bioreactors. mAbs are glycoproteins with a molecular weight of approximately 150 kDa. Antibodies are composed of two light chains and two heavy chains (LC and HC, respectively) linked to one another through covalent inter- and intra-chain disulfide bonds. The individual chains are composed of amino acids and can be post-translationally modified (PTM). The different modifications include glycosylation, phosphorylation, methylation, oxidation, and nitrosylation.

A reliable characterization of mAbs is essential to ensure the safety and efficacy of both the innovator and biosimilar drugs.1 Therefore, the critical quality attributes (CQAs) are defined for each protein along with their acceptable ranges. For example, the extent of deamidation, pyroglutamination, oxidation, or formation of lysine variants in mAbs is quantified in relation to their respective native forms.2 Common analytical techniques employed to verify CQAs being within the set limits include capillary zone electrophoresis, isoelectric focusing, ion exchange, size exclusion (SEC), reversed phase (RP) or hydrophilic interaction liquid chromatography (HILIC), coupled with ultraviolet (UV), fluorescence, or mass spectrometric (MS) detection.3,4 Strategies used to aid the analysis include chemical or enzymatic fragmentation of the protein into subunits,5 removal and analysis of glycans, and proteolytic digestion of the protein into smaller peptides followed by their sequencing. A combination of these techniques can also be applied. For the analysis of mAbs from cell culture supernatants, an affinity purification step is often used to prepare samples prior to their analysis.6

Intact mass analysis relates to the measurement of the mass of an intact mAb without its dissociation into subunits. Middle-up experiments are performed after cleaving the mAbs into several large fragments, or subunits, via chemical reduction or proteolytic digestion. This can provide information on the sites of modification.

In peptide mapping, the protein is cleaved into fragments with a protease enzyme, most commonly trypsin. Prior to the enzymatic digestion, it is common to denature the protein to expose internal amino acids. As in middle-up analysis, the protein may be treated chemically to break disulfide bonds linking different portions of the protein. This reduction step is typically followed by alkylation of the exposed free thiols to prevent reformation of disulfide bonds. Minimizing the introduction of modifications to individual amino acids during the analytical stages of peptide mapping is also important. For example, under appropriate conditions, asparagine can be deamidated and methionine can be oxidized, both of which alter the mass of the peptide.

Glycan analysis is a third means of characterizing CQAs of mAb therapeutics. Glycans are polysaccharide chains that are attached to proteins (glycoprotein) or lipids (glycolipid). They exist as an array of different sugar units attached through different linkages and sometimes existing in complex di-, tri-, and tetra-antennary structures. Glycans are typically described as “N-linked,” when attached at the side chain nitrogen of asparagine, or “O-linked”, when linked to the side chain oxygen of serine or threonine. Glycan profiles can affect the stability and bioavailability of mAb therapeutics and can vary with manufacturing conditions. Characterization of glycans is essential to ensure the equivalence of newly released mAb lots to the approved drug.

Figure 1 illustrates how the three approaches fit into the overall characterization of a mAb, along with a technique for purification of mAbs when necessary. Next, we look at each of the three workflows in a bit more detail. 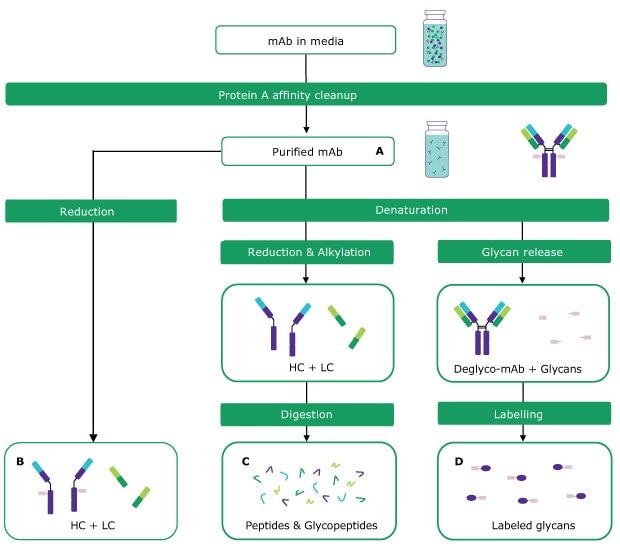 Non-reducing (intact) and reducing (middle-up) SEC-MS workflows for mAb analysis provide a high- level characterization of the protein structure and subunits.10 Intact analysis yields mass measurement of the entire mAb, without dissociation of the subunits. Use of high resolution, high mass accuracy mass spectrometers to verify molecular weight can be utilized to reveal information about stoichiometry and proteoforms that may exist. Multiple charge state spectra are deconvoluted to allow correlation of observed masses with expected or theoretical masses.

In SEC, analytes enter, or are excluded from, the pores of the chromatographic support based on size. In a mixture of mAb, mAb aggregates, and antibody fragments, large aggregates elute first, followed by the antibody and then the fragments. In a middle-up analysis, HCs can be separated from LCs in this same fashion to identify the glycosylation sites on one or the other chains.

A photodiode array (280 nm) trace, total ion chromatogram, MS spectrum, and deconvoluted MS spectrum of adalimumab are shown in Figures 2 and 3 (see conditions in Table 1). Observed masses of the non-reduced mAb are found to correlate well with the theoretical masses and observed mass error was found to be 0.010% or less. Deconvolution of the spectrum revealed several different glycoforms.

Peptide mapping attempts to characterize the exact sequence of amino acids in a protein along with any modifications to those amino acids. In this work, sample proteins were digested with trypsin in a low-artifact digestion buffer11 and utilizing filter-assisted sample preparation (FASP).12 The latter makes use of a molecular weight cut-off filter, in microcentrifuge tube format, to separate peptide fragments from whole protein. The low-artifact digestion buffer minimizes amino acid modification through the digestion process to provide a more accurate depiction of the protein being produced.

The digest is injected onto an HPLC column capable of resolving as many of the peptide fragments as possible, including those bearing glycans, prior to MS detection. HPLC columns based on superficially porous particles (SPP) like Ascentis® Express and BIOshell™ columns are suitable to obtain high efficiencies and resolution. Figure 4 shows the chromatographic profile obtained for the model mAb, adalimumab while Table 2 displays the method conditions. Coupling two 15 cm columns provided greater separation of peptides across the run as well as slightly better retention of hydrophilic peptides. 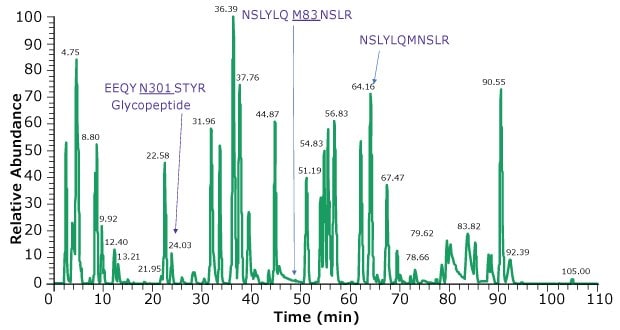 Figure 4.Base peak chromatogram of adalimumab tryptic peptides. Heavy chain glycosylated peptide (EEQYN301STYR) is observed at 24.03 min. Using a dual column set up, we observe hydrophilic peptides such as PGK, SCDK, VDK eluting at under 4 min. An example peptide and its oxidized form are NSLYLQM83NSLR and NSLYLQMNSLR eluting at 49.30 and 64.16 min, respectively.

The depth of information provided by peptide mapping has led to the development of multi-attribute methods (MAM) that are used to ensure quality and consistency of protein therapeutics with a single method.13 With MAMs, a list of PQAs (product quality attributes) is generated from an in-depth characterization of the protein-of-interest using high-resolution, high-mass accuracy MS/MS, and peptide mapping experiments. These analyses include characterization of PTMs, particularly glycosylation. Results of the in-depth characterization are used to create a library of features expected from the therapeutic products during their manufacture. A simpler, MS only instrument can then be used to monitor the essential PQAs, or CQAs, during on-going monitoring of drug manufacture. The occurrence of newly identified, missing, or changed peaks during analysis triggers further investigation. The mild, rapid digestion provided by FASP and the low artifact digestion buffer, along with the excellent sequence coverage here, lends itself to MAM quality control of protein therapeutics.

A prerequisite for accurate quantification of glycans is their complete release and isolation from the protein. Enzymatic cleavage with PNGase F is remarkably effective for achieving this. PNGase F is characterized by its high activity, broad substrate specificity, and its property of cutting most asparagine linked (N-linked) glycans. The glycan residue remains intact and can be subjected to further analysis. Here, a PNGase Fast Kit was used which, in combination with the enzyme, provided drastically reduced reaction time but with an accuracy equivalent to traditional methods.

Among glycan derivatization reagents, procainamide offers better fluorescence and electrospray ionization, and therefore better sensitivity than the more traditional 2-AB and 2-AA labeling. Here, released N-glycans were analyzed by a UHPLC-FLR-MS method that takes advantage of the quantitation provided by fluorescence detection and mass spectrometric identification. In total, 16 glycan features of adalimumab were observed. Figure 5 illustrates the fluorescence chromatogram of adalimumab glycans. while Table 3 provides the chromatographic conditions. Glycan peak areas were integrated, and the MS spectra were used to confirm glycan identities (Table 4). In total, twelve different glycans were quantified using this approach. The glycan profile, including qualitative and quantitative aspects, is comparable to the results obtained elsewhere.14,15

Figure 5.Fluorescence chromatogram of adalimumab after PNGase release and derivatization with procainamide. Peak annotations correspond to glycans shown in Table 4.

Characterization and monitoring of therapeutic mAbs is required by regulatory authorities to ensure efficacy and safety of these drugs. Workflows for three important approaches to mAb analysis were developed and presented elsewhere as detailed step-by-step procedures.(7-9)

See our application collection for Biopharmaceutical Characterization at our Pharma QC page SigmaAldrich.com/PharmaQC