Flexibility in Flow Cytometry Multiplexing with ColorWheel® Antibodies and Dyes

Flow cytometry is a technique that allows researchers to rapidly analyze individual cells within a heterogeneous population and is frequently utilized within immunology, immuno-oncology, neurobiology, and many more fields of research. The additional ability to evaluate multiple characteristics of these cells through assays utilizing various fluorochromes or dyes makes multiplexing in flow cytometry a very dynamic and powerful tool. However, designing and expanding multicolor assays come with a variety of challenges that researchers must overcome. Our ColorWheel® antibodies and dyes are specifically designed to address these challenges and bring simplicity and flexibility to multiplex flow cytometry assays without compromising on performance.

What Is Multiplexing in Flow Cytometry?

Multiplexing or multicolor flow cytometry refers to the ability to recognize different cell surface and intracellular antigens with multiple antibodies labeled with fluorescent markers within a single well of a microtiter plate. Cells are hydrodynamically focused into a single stream and passed through a laser beam, allowing for multiparameter data collection of each cell. By adding a unique fluorochrome or dye to each antibody, one can distinguish and characterize cellular subpopulations of interest by the color(s) emitted when excited by the cytometer’s laser beam(s)1 .

Factors to Consider When Building a Flow Cytometry Multiplex Panel

The ability to analyze multiple antigens simultaneously opens the door to increasingly complex experiments, and often routine experiments using the same antigens, commonly referred to as panels. When building a multiplex panel in flow cytometry, there are numerous factors that researchers must consider: The balance of these aspects to build a new multiplexed experiment can be complicated and take quite a bit of time and effort to achieve. Expansion of existing multicolor panels to address new questions adds another layer of complexity to this already daunting task. Researchers must find a flow cytometry-validated antibody against the antigen of interest with a dye appropriate for that antigen’s expression level, not already in use by the instrument’s laser configuration, and without significant spectral overlap with existing antibody-dye pairs in the panel.

Multiplexing with ColorWheel® Antibodies and Dyes

When solving the puzzle of multiplexing in flow cytometry, the simplicity and flexibility that comes with ColorWheel® antibodies and dyes remove experimental constraints to unlock more freedom in multiplex assay design. Using a proprietary technology, any ColorWheel® antibody can be paired with any ColorWheel® dye. All ColorWheel® antibodies and dyes are validated for use in flow cytometry and are optimized to work at convenient 1:1 (volume/volume) ratios for easy assembly of antibody-dye pairs. With just three steps and five minutes of hands-on time, users can create optimal panels of antibody-dye pairs for their instrument with antigens of interest, using our Simple 3-Step ColorWheel® Flow Cytometry Reagent Preparation Protocol. 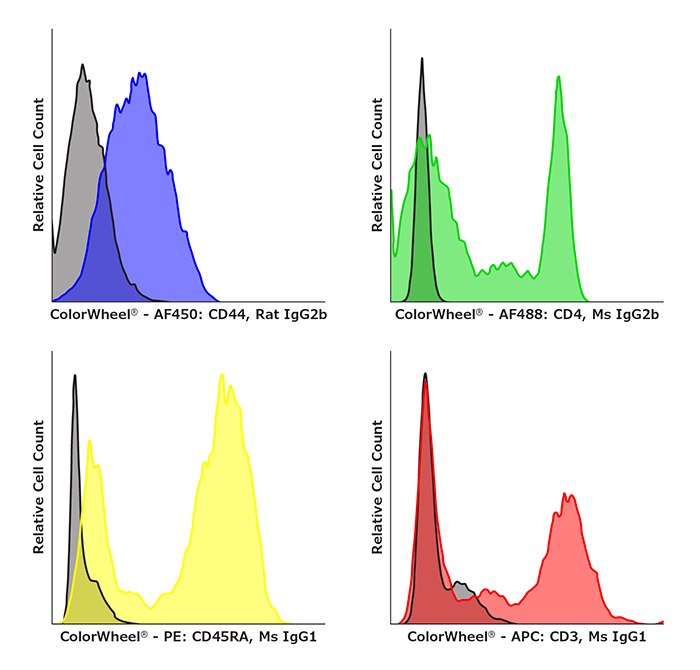 Expanding an Existing Multiplex Assay by Adding a New Target

Problem: The new target is only commercially available conjugated to one dye, displacing the antibody already conjugated to that dye in your existing multicolor assay.

Problem: Matching antibodies against antigens of varying expression levels with dyes of suitable brightness consumes a lot of time and effort.

Figure 2.ColorWheel® antibodies paired with ColorWheel® dyes compared to traditional directly conjugated primary antibodies against the same targets. These were run simultaneously in a multiplex format.

Stay connected with us by scanning the convenient QR code printed on each ColorWheel® product label to take you to our ColorWheel® digital hub. Here you will find the newest additions to the ColorWheel® portfolio, as well as information and resources on the technology, applications, and more.

Our ColorWheel® antibodies are designed and tested with your needs in mind and are backed by our Antibody Guarantee. You can also experience them for yourself by requesting more information about our trial offer.