At the research stage, new materials are typically synthesized and tested at gram quantities. However, the consistency and performance of these materials when produced in large batch sizes remains uncertain until the synthesis process has been developed. Industry is typically reluctant to take on the financial risk of process scale-up for untested materials. Hence, process development and scale-up of advanced battery materials is the critical link connecting material discovery, market evaluation, and high-volume manufacturing.2–4 To bridge research and commercialization of high-energy cathode materials, systematic engineering research is ongoing at Argonne’s Materials Engineering Research Facility (MERF). This involves investigating customized synthesis and scale-up of each candidate material via several reaction techniques including high energy ball milling, carbonate and hydroxide co-precipitation, and other next-generation reaction techniques. By these synthesis methods, we have scaled up numerous precursor and cathode materials, including Ni0.33Mn0.67CO3, MnCO3, Ni0.16Mn0.67Co0.16CO3, Ni0.33Mn0.67(OH)2, Ni0.27Mn0.54Co0.19(OH)2, Li2MnO3, and Li1.14Ni0.29Mn0.57O2.

This article details the process development and scale up of Li1.14Ni0.29Mn0.57O2, one of several promising cathode materials developed at bench-scale at Argonne National Laboratory for use in electric vehicle applications. The process developed is reproducible and produces high quality material for further research and evaluation, including formation mechanism studies, surface coating, and pouch-cell testing. The precursor of this lithium and manganese-rich metal oxide material was produced using carbonate co-precipitation, which produced spherical particles, prohibited the oxidation of Mn2+ to Mn3+, and kept the oxidation state of all transition metals as 2+.5-6 The article also elaborates on the electrochemical properties of the scaled-up material.

To produce kilogram quantities of high-energy lithium and manganeserich cathode materials (specifically, Li1.14Ni0.29Mn0.57O2), we first used the co-precipitation method to synthesize the initial carbonate precursors (Ni0.33Mn0.67CO3). Nickel sulfate hexahydrate (NiSO4∙6H2O, Prod. No. 227676) and manganese sulfate monohydrate (MnSO4∙H2O, Prod. No. M7634) were used as starting raw materials to prepare the transition metal aqueous solution with a concentration of 1 M. The feed flow rates of the transition metal aqueous solution, sodium carbonate (Prod. No. S7795) solution, and ammonium hydroxide solution (Prod. No. 320145) were carefully determined and controlled to keep the pH value of co-precipitation at 8.0 } 0.1. During co-precipitation, precursor materials were collected every 30 min to measure particle growth, morphology, and size distribution. The obtained precursor products were filtered, washed, and dried in a vacuum oven at 40 °C for 24 hr. Finally, the dried precursor particles were mixed thoroughly with Li2CO3 (Prod. No. 255823) and then calcined at 900 °C.

The electrochemical properties of the obtained materials were evaluated with coin-type half-cells (CR2032). To prepare the positive electrode, 84 wt.% active material, 8 wt.% super C65 carbon black, and 8 wt.% PVDF in NMP were mixed and coated onto an aluminum foil. The thickness of the cathode film was ~40 μM. Celgard 2325 membrane was used as the separator, and the electrolyte was 1.2 M LiPF6 dissolved in the ethylene carbonate and ethyl methyl carbonate in a ratio of 3:7 (wt.%).

Development of a Continuous Co-precipitation Process

A scalable and economically feasible continuous synthesis process is critical for both commercialization and optimal quality control in the production of cathode materials. Steady-state production by continuous co-precipitation means that product properties such as precursor size, morphology, size distribution and particle density are consistent throughout the operation time. Therefore, continuous co-precipitation provides superior consistency in product quality with low manufacturing cost, which is a key factor for the performance and cost of battery packs.

For a conventional continuous stirred-tank reactor (CSTR) system, the growth of particles is uncontrollable and results in relatively large particles over 30 μM, triggering detrimental effects on battery safety and performance.6 This is due to the contribution of too many conjugated process variables including reactor geometry, reaction temperature, reaction medium pH, residence time, feed concentration, feed flow rate, stirring speed, and impeller type, among other factors. These inputs have a strong impact on nucleation, particle growth, morphology, and density. Even though a CSTR system has product consistency and economic feasibility, the product properties themselves can be very hard to control compared to batch processes. Therefore, it is quite challenging to produce a precursor within the desired specification via a continuous operation. By systematic process engineering research at Argonne’s MERF, an advanced 20L CSTR system was developed to produce a spherical and sizecontrolled carbonate precursor by a co-precipitation method. 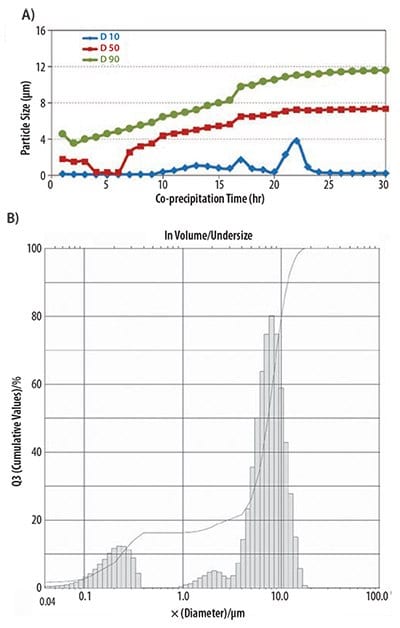 Figure 2. shows typical Scanning Electron Microscopy (SEM) images of Ni0.33Mn0.67CO3 carbonate precursors obtained at the steady-state conditions. The average particle size was found to be 7 μM, which is consistent with the particle size analysis results given in Figure 1. The micrograph also reveals the precursor particles have slightly quasispherical morphologies with a smooth surface.

Cobalt-free lithium and manganese-rich metal oxides are attractive cathode materials because of their high-energy density. For electric vehicle applications, the Li1.14Ni0.29Mn0.57O2 compound was selected as a scale-up material. Its precursor (Ni0.33Mn0.67CO3) was produced by a customized 20L CSTR co-precipitation system. The physical properties of the precursor (such as particle size, morphology, size distribution, and density) have a strong effect on the electrochemical performance of the cathode materials.7–9 Therefore, we optimized synthesis conditions of this precursor in order to maximize performance.

X-ray diffraction (XRD) studies were conducted to further investigate the phases formed after lithiation. The XRD pattern in Figure 4 shows the existence of a secondary component between 20° and 25° (Li2MnO3-like phase) in the structure of Li1.14Ni0.29Mn0.57O2. This can be primarily indexed based on the m space group with a typical hexagonal structure and a major layered component as in similar materials.10–11 The clear peak splits in preferred orientation is also shown in the XRD profile, indicating a welldefined crystallization of the material.

Figure 5 shows the first and second charge–discharge profile of Li1.14Ni0.29Mn0.57O2. The current density was equivalent to C/10, assuming that 250 mAh g-1 is achieved at the 1 C rate and the cell cycled between 2.0 V and 4.75 V. The first discharge capacity of scaled-up material is 250 mAh g-1, with a columbic efficiency of 83.9%. This capacity is higher than that of the bench-scale material (229 mAh g-1). The second discharge capacity of scale-up material is 248 mAh g-1. 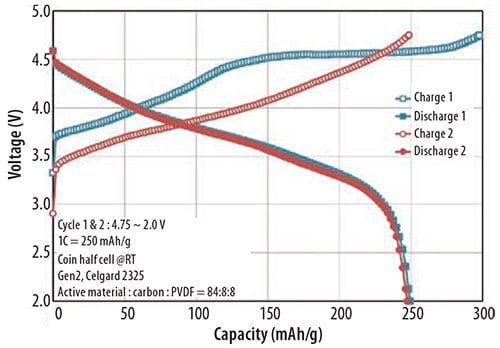 Figure 6A presents the cyclic performance comparison between the bench-scale and scaled-up Li1.14Ni0.29Mn0.57O2. The initial two charge–discharge cycles were obtained between 2.4 V and 4.75 V under C/10 rate; the current density was equivalent to C/3 between 2.4 V and 4.5 V for the subsequent cycles. The scaled-up material shows high discharge capacity and excellent cycling performance retaining a capacity of 180 mAh g-1 after 140 cycles at C/3 rate. As shown in Figure 6B, the rate capability of the scaled-up material is much better than that of the bench-scale material at the C rates of C/10, C/5, C/3, C/2, 1 C, 2 C, 3 C, 4 C, and 5 C. This comparison suggests that the smaller size and narrower size distribution of the particles comprising the scaled-up material, compared to those of the bench-scale material, increase the rate capability of Li1.14Ni0.29Mn0.57O2. The scaled-up Li1.14Ni0.29Mn0.57O2 delivers a high discharge capacity and shows superior cycle stability and rate performance. 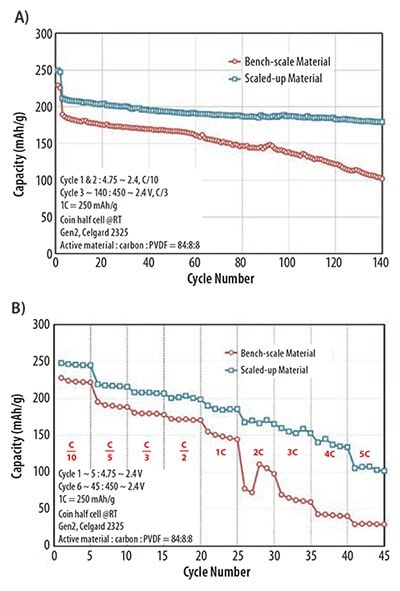 Figure 6. A) Cycling and B) rate performance comparison between the bench-scale and scaledup materials of Li1.14Ni0.29Mn0.57O2.

The results of 30 hr co-precipitation clearly showed that the developed 20L CSTR system generates 7 μM spherical precursor continuously, and we have successfully scaled up high-energy cathode materials to kilogram quantities. Since the electrochemical performance of a cathode material (capacity, energy density, cycle life, etc.) is strongly affected by the synthesis and scale-up methodology, developing a customized synthesis process for target bench-scale cathode materials while maintaining economic feasibility is critical for the battery industry. This process development and scale-up research is a major stepping stone between the research lab and the commercialization of high-energy materials that will be used in electric vehicles.

Support from the U.S. Department of Energy’s Vehicle Technologies Program, specifically from David Howell and Peter Faguy is gratefully acknowledged.

The electron microscopy was accomplished at the Electron Microscopy Center at Argonne National Laboratory, a U.S. Department of Energy Office of Science Laboratory operated under Contract No. DE-AC02-06CH11357 by UChicago Argonne, LLC.

We thank Gerald Jeka and Mike Kras for material characterization. The submitted manuscript has been created by UChicago Argonne, LLC, Operator of Argonne National Laboratory (“Argonne”). Argonne, a U.S. Department of Energy Office of Science laboratory, is operated under Contract No. DE-AC02-06CH11357.