Atomic layer deposition (ALD) exploits a sequential set of two or more surface reactions repeated cyclically to achieve thin film growth.1 These surface reactions occur between a chemisorbed species attached to a substrate and incoming precursor molecules from the gas-phase. Due to its precise deposition mechanism, ALD possesses many advantages over other thin film deposition processes. First, ALD offers extremely precise control at the angstrom level over the thickness of the deposited layer. Second, ultrahigh-aspect-ratio structures, including nanoporous solids2 and three-dimensional (3D) hierarchical structures,3 can be conformally and uniformly covered by ALD without thickness or composition gradients. Third, the chemical composition of films can be controlled by tailoring ALD cycles in a programmable manner.4,5 Finally, ALD enables deposition at lower temperatures,6 making it possible to use with polymer-based7 and biological substrates that are incompatible with higher temperatures.8

It is not widely appreciated that only a few monolayers of material added to a surface or interface can significantly impact performance, quality, and reliability. Since ALD allows atomic scale resolution in deposition of monolayers, new scientific mechanisms and phenomena can be investigated by characterizing these surfaces. While there are many excellent review articles on applied ALD research,9–17 none focus on the impact of few monolayer ALD films on materials and devices. Therefore, this review highlights research using few monolayer ALD to enhance material and device quality, performance, and reliability, specifically in the fields of photovoltaics, batteries, and catalysis.

We define “few monolayers” as less than 10 layers or a thickness of less than 2–3 nm. This demarcation of a ‘few’ is based on research reviews, which show impressive improvements in performance and reliability within this thickness range, and in most instances actual performance suppression by a thicker film. This definition also includes descriptions such as ultrathin, thin, compact, and few layer.

TiO2 (up to four nm) was deposited by ALD on spin-coated mesoporous nanoparticulate TiO2 films as blocking layers to make high efficiency solid-state perovskite-based (CH3NH3PbI3) solar cells.18 As shown in Figure 1A, a two nm conformal TiO2 ALD overlayer was sufficient to block the electron recombination, leading to a large open-circuit potential of 969.4 mV (reference potential 836.6 mV) and the high photon-to-current efficiency (PCE) of 11.5%.

Few layer ALD has been employed to enhance the PCE of DSSCs.19–22 An ultrathin TiO2 layer (10 cycles, 0.3-0.6 nm) was successfully coated on the surface of submicrometer-sized aggregates of ZnO nanocrystallites.19 As shown in Figure 1B, both the open-circuit voltage and the fill factor were increased by the introduction of a TiO2 layer, due to suppression of surface charge recombination, without impairing the photocurrent density. This resulted in a more than 20% enhancement of PCE from 5.2% to 6.3%.

Conformal TiO2 interfacial layers with a thickness of 1.5, 2.2, and 3.2 nm were coated on CdS quantum dots (QDs) and N719 dyes to enhance the performance of quantum dot and dye co-sensitized solar cells.23 The introduction of TiO2 interfacial layers significantly enhanced the short-circuit current density and PCE by improving the stability of the QDs and reducing the electron recombination with the electrolyte. The highest PCE reported was 2.36%, a 41% improvement from the reference device, at the optimal TiO2 thickness of 2.2 nm.

Ultrathin compact Al2O3 layers were introduced by ALD (1-7 cycles) onto a layer of hole-transport material (HTM) to improve the stability of hybrid organic–inorganic perovskite solar cells in humid conditions.24 The experimental results shown in Figure 1C indicate that a 3-cycle (~0.3 nm) ALD Al2O3 layer greatly improved the ambient stability of organic–inorganic perovskite solar cells and retained 90% of the initial PCE after 24 days of storage in air. When the number of ALD cycles increased, the current decreased sharply, probably caused by a significant reduction in the quantum tunneling of the holes.

Batteries face limitations in energy storage density, charging rate, cycling stability, safety, and cost.17 Few layer ALD can effectively address many of these issues. For example, nanosized LiCoO2 powders were prepared by a molten salt method, and then coated directly using ALD (2 and 6 cycle) to make ultrathin conformal Al2O3 films (Figure 2A).25 The nano- LiCoO2 electrodes coated with 2 ALD cycles of Al2O3 (0.22 nm) delivered the highest discharge capacity of 133 mAh/g at a current rate of 1400 mA/g (7.8 C), corresponding to a 250% improvement in reversible capacity when compared to bare LiCoO2 nanoparticles. The improved performance resulted from the suppression of cobalt dissolution from the LiCoO2 by the ALD Al2O3 film. However, coating nano-LiCoO2 electrodes with 6 ALD cycles of Al2O3 decreased the rate performance, indicating that thick films resulted in poor Li+ conductivity.

Nanostructured anodes coated by few layer ALD have also shown enhanced rate performance and cycling stability.26 Porous Fe2O3 nanorods anchored on nitrogen-doped graphene sheets (NGr) (Figure 2B) are one example. ALD was used to deposit two cycles of Al2O3 film (<1 nm) on the Fe2O3 nanorods anchored on NGr (NGr-M-I-2ALD). This anode displayed a first-cycle Coulombic efficiency of 89%, much higher than uncoated NGr-I-M (65%). Further, the stable capacity of the anodes (249 mAh/g) at 20 A/g was maintained for 200 cycles.

Few layer ALD was also used for cathode modification to improve the performance of a lithium-sulfur (Li-S) battery.27 Al2O3 was deposited by ALD on a graphene-sulfur (G-S) composite electrode. The specific capacity (646 mAh/g) of a G-S composite cathode with 10 ALD cycles of Al2O3 film (~1 nm) after 100 charge/discharge cycles at 0.5 oC was 103% higher than that of bare G-S (Figure 2C). The coulombic efficiency, rate capability, and electrochemical stability of the G-S composite electrode were also significantly increased by ALD– Al2O3 coating. 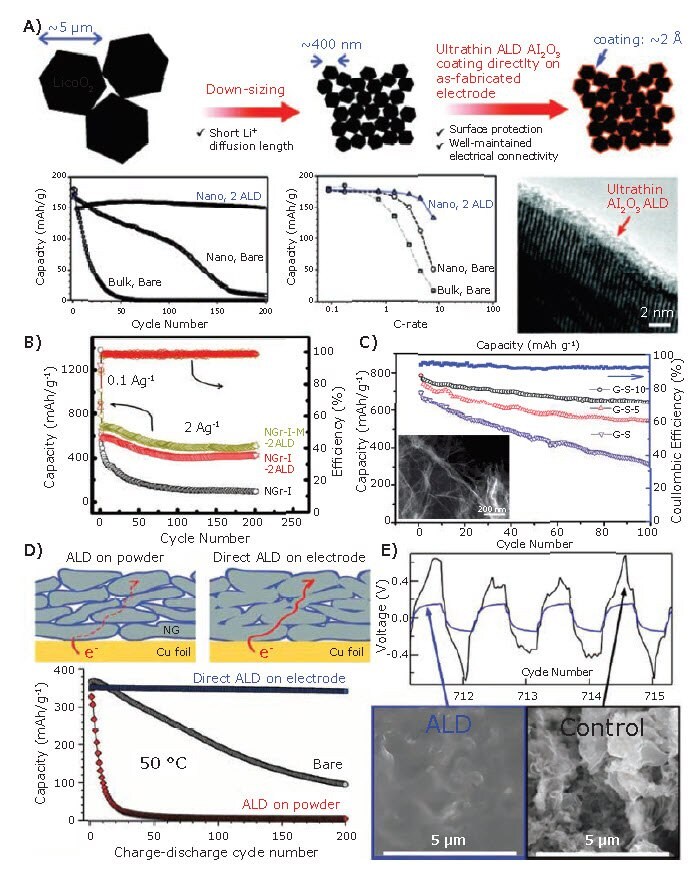 The challenges in catalyst development are improving catalytic activity, selectivity, and stability with minimal byproducts.14 Current synthetic methods, which include impregnation, ion exchange, and precipitation, are limited in facing these challenges because of the non-uniform distribution of surface sites and the relatively narrow set of starting materials available. Few monolayer ALD has been tested as a way to address these challenges.

Metal oxide catalysts with high catalytic activity and stability have been developed by few monolayer ALD.30 TiO2 thin films (15 nm) were deposited by ALD on supported Ag nanoparticles, while SiO2 thin interlayers with thicknesses of 2, 5, 10, and 20 nm were deposited by ALD to separate the TiO2 film from Ag nanoparticles. The photocatalytic activities of the samples and references were investigated by degradation of methylene blue (MB) in UV light illumination (Figure 3A). TiO2/SiO2/Ag architectures with a 2 nm SiO2 interlayer displayed the best photocatalytic performance due to blue-shifting in the localized surface plasmon resonance (LSPR) and coupling energy from Ag to TiO2 bandgap. Thicker SiO2 interlayers decreased the photocatalytic activity because they reduced the penetration depth of the LSPR electromagnetic field into the SiO2 layer.

Few layer ALD was also employed for the photocatalytic conversion of CO2 to CO.31 Dense ZnO islands with different thickness were coated via ALD onto large arrays of massively parallel, single crystalline, high-density CuO nanowires generated by thermal oxidation of high-purity copper foils. The CO yield first increased and then decreased with increasing ALD cycles, and CuO nanowires with eight ALD cycles of ZnO islands (1.4 nm) displayed the optimal performance (Figure 3B). This behavior occurred because 1) the favorable band alignment and epitaxial matching between ALD ZnO nanoislands and CuO nanowires led to recombination-free charge transfer, 2) the surface morphology allowed gas exposure to both ZnO and CuO surfaces, and 3) surface defects on exposed ZnO islands resulted in lower quantum yields due to the trapping of transferred electrons.

The catalytic activity, selectivity, and stability of supported metal catalysts were also improved by few layer ALD.32–34 One of the most important catalysts is supported platinum. Platinum nanoparticles were deposited on Al2O3 by ALD (one or five cycles) with H2 or O2 as the second half-cycle precursor for oxidative dehydrogenation of propane. Using H2 as the second precursor resulted in smaller Pt particles with lower average coordination numbers than O2. After one ALD cycle (1.1 nm, measured by TEM), Pt catalyst with H2 as the second precursor exhibited the highest C3H6 selectivity (37% at 14% conversion at 400 ˚C), likely due to the small particle size (Figure 3C). Commercial Pt catalysts (3.9 nm, measured by TEM) had a selectivity of less than 1% at 9% conversion under the same reaction conditions.32

TiO2 overcoated Co/TiO2 catalysts were also prepared to replace precious-metal catalysts, like Pt and Ru, for aqueous-phase hydrogenation (APH) reactions.35 Generally, base metals (like cobalt) are inexpensive, abundant, and active for liquid phase reactions, but they have low stability caused by irreversible deactivation. Figure 3D shows that a thin ALD TiO2 coating prevented both leaching and sintering of Co particles during aqueous-phase reactions, due to TiO2 decoration of undercoordinated cobalt sites located at defects, corners, and edges. The regenerated TiO2/Co/TiO2 catalysts (30 ALD cycles, 1.2 nm) displayed much higher catalytic reactivity and stability than fresh catalysts for APH of furfuryl alcohol because more Co active sites were exposed after regeneration.35 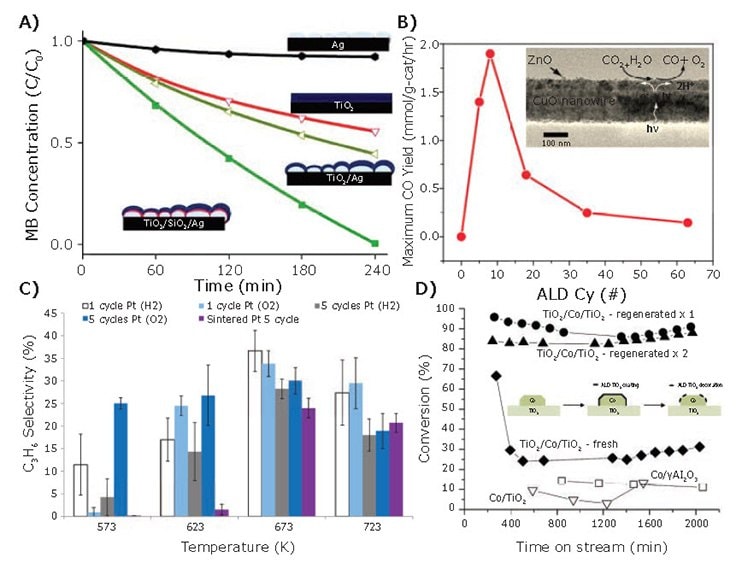 In summary, ALD is a singularly powerful technique that can be applied to tailor surfaces and interfaces using few monolayer films, which have a significant impact on heterogeneous material and device performance. The structure of the few monolayers can be precisely engineered, depending on how the precursor molecule interacts with the chemisorbed ligands on the substrate. If the deposition is layer-by-layer, conformal films are produced that are ideal for charge blocking or for providing surface passivation and protection. ALD films using these methods have been applied in a number of photovoltaics and batteries. On the other hand, if the ALD chemistry is driven by island nucleation followed by growth, then surfaces and interfaces can be decorated with nanocrystals in order to store charge and present chemically active facets useful for inducing chemical reactions. Their diversity in tailoring surfaces and interfaces is unique to ALD processes.

As ALD processes continue to develop, new precursor molecules are needed to provide greater flexibility for tailoring surfaces and interfaces. The interaction of precursor ligands with substrate functional groups controls nucleation of ALD films at cycle ‘one’. However, it is only now becoming clear that the interaction of nearest-neighbor adsorbed precursor molecules can affect film composition, structure, and thus properties.36–43 This raises the interesting question as to whether the design of precursor molecules with appropriate ligand chemistry can be exploited to deterministically control film nucleation and growth on any surface.

Regardless of the application, ALD at its ultimate thickness limit has heralded a new era of surface and interface engineering. The control of this process appears to be remarkably simple, and yet has hidden complexities that will continue to push the boundaries of discovery of new materials and concept devices, and allow even finer control over their properties and applications.