Determining the sequence and structure of glycans

Enzymatic analysis of oligosaccharides using highly specific exoglycosidases, either sequentially or in a matrix array, is a powerful technique in determining the sequence and structure of glycans. Exoglycosidases remove terminal carbohydrates from the non-reducing end of a glycan, but do not cleave internal bonds between carbohydrates. By using positionally specific exoglycosidases, the removed glycan residues can be identified by linkage as well as sugar. For example, β(1→4) galactosidase will remove terminal β-galactose residues attached with a (1→4) linkage but not residues attached with a (1→3) or (1→6) linkage. In glycan sequencing, the glycan pool is separated into individual oligosaccharides, and each purified glycan is digested sequentially with various linkage-specific exoglycosidase enzymes. An example of an exoglycosidase digestion scheme for the structural analysis of a triantennary complex N-linked glycan is illustrated in Figure 1. 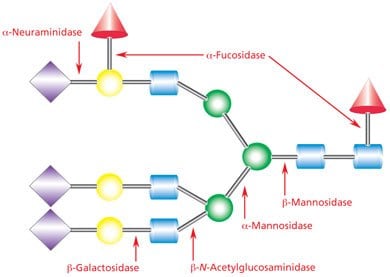 Exoglycosidase digestion, when combined with high-performance separation techniques such as chromatography or electrophoresis, is a rapid and cost-effective method for oligosaccharide characterization. By incorporating enzymatic digestion with capillary gel electrophoresis, the sequence of each glycan in a released pool can be elucidated. When laser-induced fluorescence is the method of detection, picomolar amounts of purified glycoproteins can be sequenced.1

Exoglycosidases have been used in sequencing methods with fluorescent tags attached to the reducing-end of glycans and polyacrylamide gel electrophoresis separations. Integral glycan sequencing (IGS) has been shown to identify complete sequence information in a single experiment. IGS integrates exoglycosidase digestion with a chemical cleavage step and permits rapid sequencing of glycosaminoglycans.2

Picomolar quantities of heparin decasaccharides have been sequenced by matrix-assisted laser desorption/ionization mass spectroscopy (MALDI- MS) after integral glycan sequencing.3 MALDI-MS techniques incorporated with IGS are both sensitive and accurate, detecting as little as 100 femtomoles of oligosaccharides with a reported mass error of ±1 Dalton.3