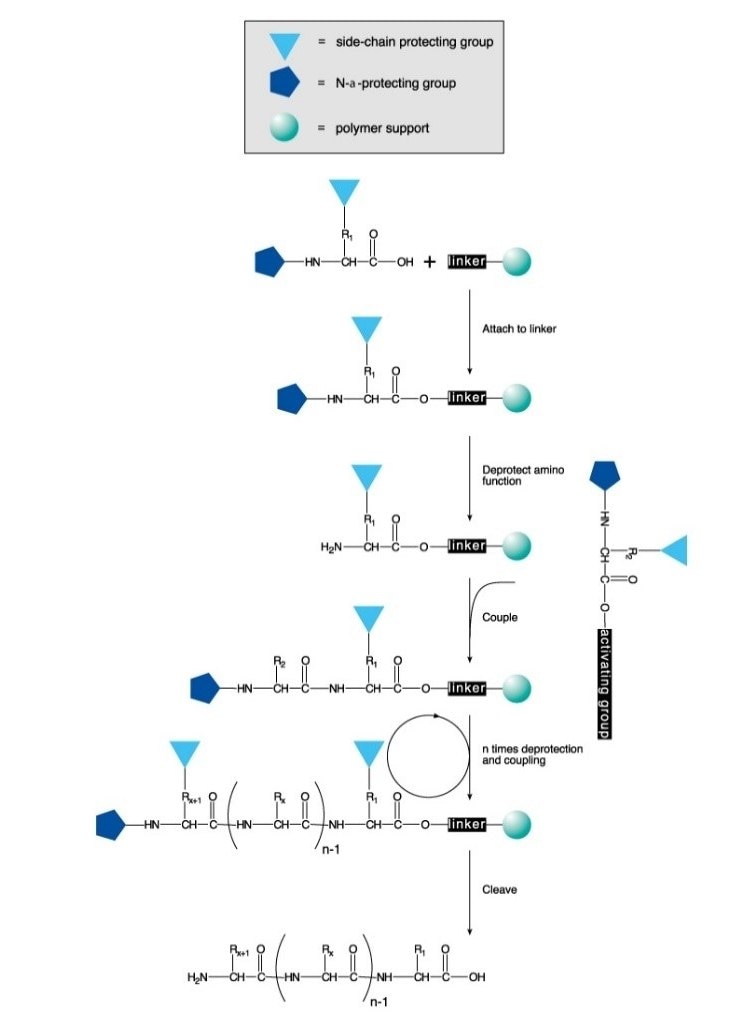 A peptide consists of two or more amino acids linked by an amide bond, to form a chain of amino acids typically 2 – 70 amino-acids long. Peptides are distinguished from proteins by not requiring to be folded for biological activity. Peptides occur endogenously as peptide hormones, such as angiotension, LHRH, enkephalin, and as toxins in plants and animals. Peptides are of great interest as lead compounds for drug discovery and as drugs in their own right. They also find applications in vaccines, biomaterials, histological probes and are used in large numbers as antigens to generate antibodies.

Peptides are synthesized chemically either in solution or on a solid phase. The process involves directed and selective formation of an amide bond between an N-protected amino acid and an amino acid bearing a free amino group and protected carboxylic acid. In solid phase synthesis, the carboxyl protecting group is linked to a polymer support. Following bond formation, the amino-protecting group of the dipeptide is removed, and the next N-protected amino-acid is coupled. 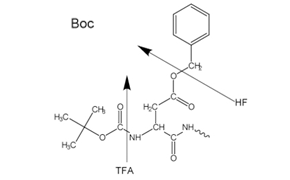 Solid-phase peptide synthesis (SSPS) is the most frequently used method of peptide synthesis due to its efficiency, simplicity, speed, and ease of parallelization. SPPS involves sequential addition of amino and side-chain protected amino acid residues to an amino acid or peptide attached to an insoluble polymeric support (Figure 1).

Either an acid-labile Boc group (Boc SPPS) or base-labile Fmoc-group (Fmoc SPPS) is used for N-α-protection. After removal of this protecting group, the next protected amino acid is added using either a coupling reagent or pre-activated protected amino acid derivative. The C-terminal amino acid is anchored to the resin via a linker, the nature of which determines the conditions required to release the peptide from the support after chain extension. Side-chain protecting groups are often chosen so as to be cleaved simultaneously with detachment of the peptide from the resin (Figure 2 and 3). 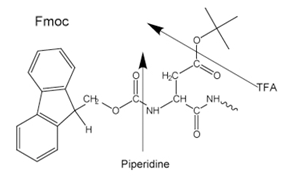 Most peptides are prepared by the Fmoc method as the final cleavage and deprotection is carried by treatment with trifluoroacetic acid as opposed to the Boc method which requires use of highly toxic, corrosive liquid anhydrous HF in specialist equipment.

Peptides of 50 amino acids can be routinely prepared although the synthesis of proteins of over 100 amino acid are commonly reported. Longer proteins can be made by native chemical ligation of fully deprotected peptides in solution. With this method, it is possible to synthesize natural peptides that are difficult to express in bacteria, to incorporate unnatural or D-amino acids, and to generate cyclic, branched, labelled, and post-translationally modified peptides.

Click Chemistry Reagents
Our portfolio of click chemistry reagents includes a variety of azides, alkynes, catalysts, and ligands to accelerate your progress in chemical biology, polymer chemistry, bioconjugation, and drug discovery.
Crosslinkers
Our portfolio of linkers and crosslinkers provide structural stability and reliability in protein-protein, protein-peptide, and peptide/protein-small molecule interactions for all your bioconjugation needs.
Chemical Biology Tools
Our chemical biology tools incorporate techniques and strengths of chemistry to address fundamentally important research in biology, medicine, and drug discovery.
Amino Acids, Resins & Reagents for Peptide Synthesis
We offer an extensive range of amino acids, resins, and reagents of unparalleled quality, including Novabiochem®, for peptide synthesis, high-throughput organic chemistry, labeling peptides, and custom manufactured products.
NHC Ligands & Complexes
Our stable and tolerable NHC ligands and complexes can be used as efficient ancillary ligands to keep your work flowing in organometallic catalysis and catalysis chemistry research.
Protection/Deprotection Reagents
We offer efficient protection and deprotection reagents for site-selectivity control of functional group transformations in multi-step organic synthesis.
Polyethylene Glycol (PEGs and PEOs)
Discover our selection of polyethylene glycol (PEGs) and PEG derivatives in a wide range of molecular weights for all your PEGylation needs and applications.