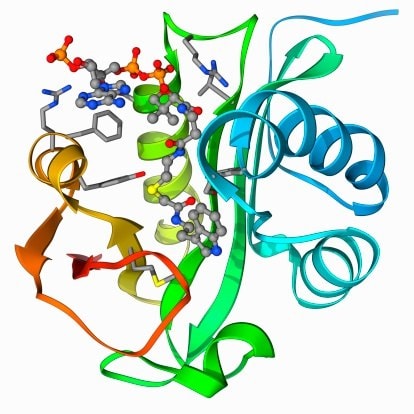 Most biochemical reactions in the body are regulated by enzymes. Coenzymes are organic compounds that facilitate the action of enzymes and can bind temporarily or permanently to an enzyme. Coenzymes can catalyze reactions, but not as effectively as when in conjunction with an enzyme.

Coenzymes can be vitamin-derived, such as from B-vitamins and vitamin C. For example, coenzyme A (CoA), an acyl group carrier that is key to metabolism, derives from pantothenic acid. Vitamin C itself is a cofactor for hydroxylases. With the exception of vitamin C, vitamins must be modified in order to serve as coenzymes. Metabolite coenzymes, such as adenosine triphosphate (ATP), are made from nucleotides.

Our high-quality coenzymes accommodate the rigorous demands of your nutrition/food science applications, metabolism research, microbiome research, and disease research. For more specific requirements, we support you with the convenience of customized products and packaging.

Vitamins
We offer a broad portfolio of vitamins for research in cell function, cell growth, and cell regeneration in living organisms and their role in nutrition, health, and disease.
Amino Acids
We have a comprehensive offering of high-purity amino acids and derivatives important to metabolomic pathways and protein structure for your research needs.
Lipids for Therapeutics and Research
We offer high-quality lipids, including fatty acids, glycerides, sphingolipids and bioactive lipids, for all your lipid analysis needs, from isolation and separation to identification and quantification.
Carbohydrates
Our broad portfolio of highly pure carbohydrates are used widely as supplements to cell culture media and as building blocks in glycan and glycoconjugate synthesis.
Microbiome
Explore our complete package for gut microbiome analysis, including sample preparation, next generation sequencing, downstream bioinformatics, and statistical analysis tools. Our products intuitively integrate into your workflow with 16S analysis of bacteria in fecal samples to whole genome sequencing (WGS).
Detection Substrates & Enzymes
Substrates and enzymes are crucial in life science research, both as tools and targets in detection systems. Discover enzyme-based protein detection systems for ELISA, immunohistochemistry, western blotting, and many more with our diverse portfolio of detection substrates and enzymes.
Natural Products
Our portfolio of natural products features isolated and purified phytochemical compounds from botanical sources to advance your research endeavors.

Metabolomics Research
Metabolomics research is the study of the metabolome, or complete set of metabolites, in biological systems by identifying metabolomic pathways for pharmaceutical and diagnostic, genomics, nutritional, and environmental applications.
Cancer Research
Cancer research strives to not only identify the cause, but also methods for detection, treatment, and prevention. Learn more about our contributions to cancer research in academic and industrial settings.
Cell & Developmental Biology Research
Rooted in physiology and biochemistry, cell and development biology features an interdisciplinary approach to understand intracellular and extracellular dynamics.
Cell Signaling
Cell signaling refers to the stimuli-driven communication cascade between cells. Learn more about cell signaling processes and protocols to study complex cellular processes.
Immunology Research
Immunology covers all aspects of the immune system, including physiological functioning and malfunctions, in all multicellular organisms. Learn more about our resources for immunology research including articles and protocols.
Neuroscience Research
Neuroscience Research
Pharmacology & Drug Discovery Research
Pharmacology & Drug Discovery Research

Bulk and Custom Services
We offer an extensive, reliable supply of production materials in bench to bulk volumes. Our custom services include quality control, testing, documentation services, chemical packaging, contract manufacturing according to your specifications.