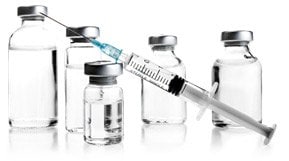 Sterile liquid applications demand excipients of the highest quality, purity, and reliability. Our comprehensive portfolio of high-quality pharmaceutical excipients offers everything you need for your medicinal drug product, backed by the regulatory and quality support of the Emprove® Program to streamline approval preparation and accelerate your processes. When your goal is a successful journey to market for small- or large-volume parenteral applications, you can count on our industry know-how, regulatory expertise, and comprehensive documentation to help you go forward with confidence.

Specifically developed for high-risk applications, our portfolio of high-quality sugars, polyols, and amino acids simplifies selection when you face critical challenges such as preventing aggregation during manufacturing. Benefits include:

Do you want to increase your efficiency during your Downstream Process?

The production of antibodies and Fc-fusion proteins involves several downstream processing unit operations. The widely used purification template with Protein A chromatography, virus inactivation at low pH, and subsequent ion exchange chromatography steps is mostly able to remove impurities like aggregates, host-cell proteins, and viruses, which could affect the safety and efficacy of the product.

The low pH elution during Protein A chromatography, as well as during virus inactivation may induce aggregation. Preventing protein aggregation during these unit operations instead of removing the multimeric forms during subsequent polishing steps would be a more efficient strategy. Excipients have shown that they can minimize aggregation levels in the final product formulation. For this reason, we have investigated the benefits of adding excipients during downstream processing on protein stability, chromatographic performance, and viral inactivation.

The study aims to investigate the application of excipients in buffer systems to study their impact on several aspects during Protein A chromatography and virus inactivation. For this purpose, a pH gradient system was applied to three different Protein A resins was applied. The results show the effect of excipients in terms of elution patterns, stabilization of the monomeric antibody, removal of host-cell protein, and virus inactivation rates, as well as the effect on binding capacities in the following cation exchange chromatography step.

We were able to confirm that the addition of excipients can have a beneficial effect for the purification during Protein A chromatography and virus inactivation by stabilizing proteins, without harming the subsequent chromatographic steps.

Curious to learn more? More details on how excipients can impact the purification step can be found here.

Liquid Formulation Strategies
Formulation for liquid pharmaceutical applications requires a meticulous blend of ingredients and production know-how. Learn how expert partnership and a comprehensive portfolio of excipients for liquid formulation can address a wide range of challenges for drug manufacturers.
Drug Delivery
Drug delivery describes techniques used to transport pharmaceutical compounds to targeted sites in the body to achieve a desired therapeutic effect with improved drug efficacy and reduced toxicity.

Emprove® Program
Confidently speed your way through the regulatory maze and fast track your new drug to market with the Emprove® Program. High-quality products, comprehensive documentation, and superior customer support facilitate your efforts in qualification, risk assessment, and process optimization.