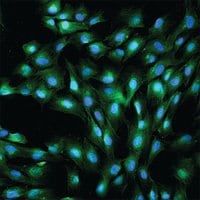 Secondary antibodies are polyclonal or monoclonal antibodies that bind to primary antibodies or antibody fragments, such as the Fc or Fab regions. They are typically labeled with probes that make them useful for detection, purification, or sorting applications.

Need help finding the correct antibody for your application?

Enhanced Validation Antibodies
Our enhanced validation antibodies are characterized using numerous molecular and cell-based techniques and assays to provided superior assurance with target specificity for your required application needs.
How to Choose a Secondary Antibody
Technical support for Secondary Antibody: How to Choose a Secondary Antibody.
Tips for Optimizing Immunofluorescence Protocols to Get the Best Image
Uses for immunofluorescence (IF)—where an antibody conjugated to a molecule that fluoresces when excited by lasers— include protein localization, confirmation of post-translational modification or activation, and proximity to/complexing with other proteins.
Antibodies in Practice: Conjugated and Secondary Antibody Use
Using conjugated antibodies and secondary antibodies in the lab. 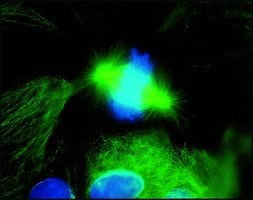 Secondary antibodies are used in many applications including: 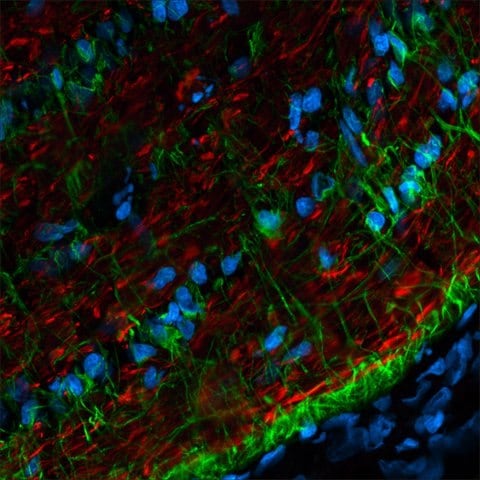 Colorimetric assays are typically based on the use of alkaline phosphatase (ALP) or horseradish peroxidase (HRP) or its derivatives. The biotin avidin (streptavidin) conjugate binding system is often used to amplify the colorimetric signal for ALP or HRP. The most common fluorescent assays utilize fluorescein isothiocyanate (FITC), Rhodamine or its derivative, tetramethylrhodamine isothiocyanate (TRITC), cyanine (Cy3), or phycoerythrin (R-PE).

We offer conjugated antibodies linked to a variety of colorimetric and fluorescent labels for use in detection, purification, sorting, and microscopy applications. Conjugated antibodies are produced in a variety of host animals making them compatible with a broad range of immunochemical reagents. For those users whose research requires labeling their own reagents, we offer antibody labeling kits for the conjugation of various labels (biotin, FITC, CF™ labels) to monoclonal and polyclonal antibodies.

Protein A is derived from Staphylococcus aureus. Protein G is derived from a Streptococcus species. Both have binding sites for the Fc portion of mammalian IgG. The affinity of these proteins for IgG varies with the animal species. Protein G has a higher affinity for rat, goat, sheep, and bovine IgG, as well as for mouse IgG1 and human IgG3. Protein A has a higher affinity for cat and guinea pig IgG (Table 1). In addition to IgG Fc binding sites, native Protein G contains binding sites for albumin, the Fab region of Igs, and membrane binding regions, which can lead to nonspecific staining. These problems have been addressed by creating recombinant forms of the protein. Recombinant Protein G has been engineered to eliminate the albumin binding region, and recombinant Protein G′ is a truncated protein that lacks the albumin, Fab, and membrane binding sites while retaining the Fc binding site, making it more specific for IgG than the native form. 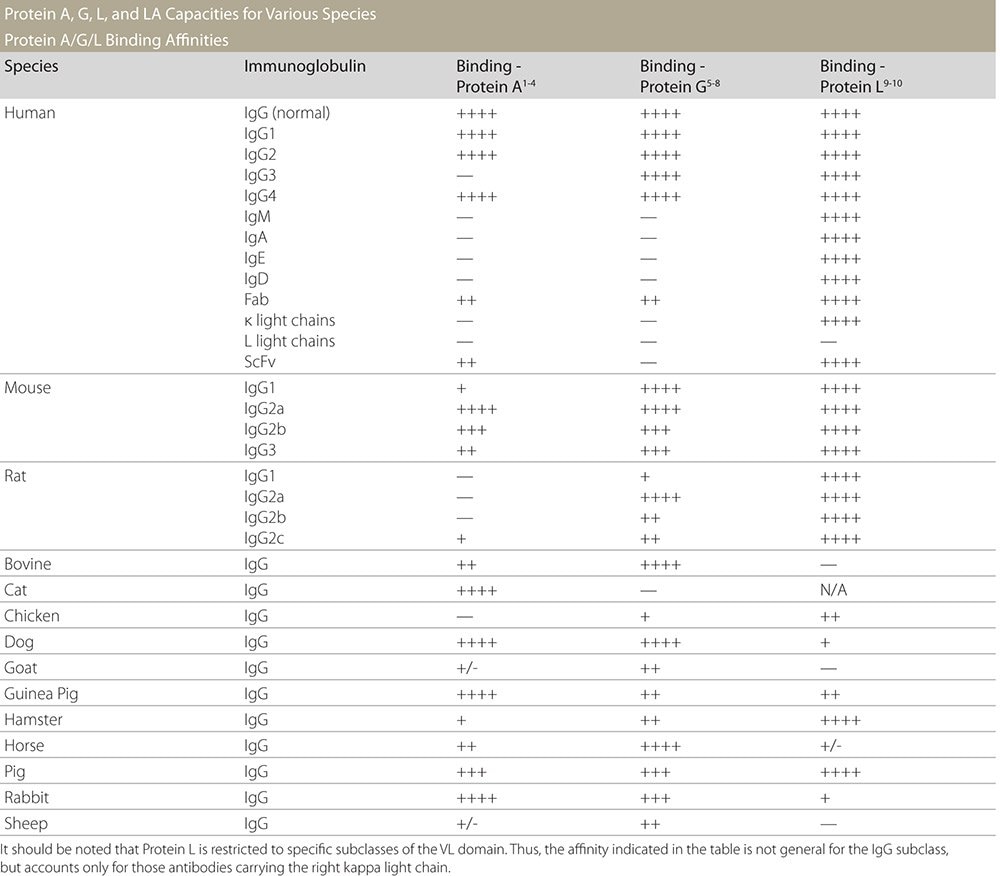 Protein L, from Peptostreptococcus magnus, has an affinity for kappa light chains (Table 2) from various species. It will detect monoclonal or polyclonal IgG, IgA, and IgM as well as Fab, F(ab′)2, and recombinant single-chain Fv (scFv) fragments that contain kappa light chains. It will also bind chicken IgG. Note: Species such as bovine, goat, sheep, and horse whose Igs contain almost exclusively lambda chains will not bind well, if at all, to Protein L. 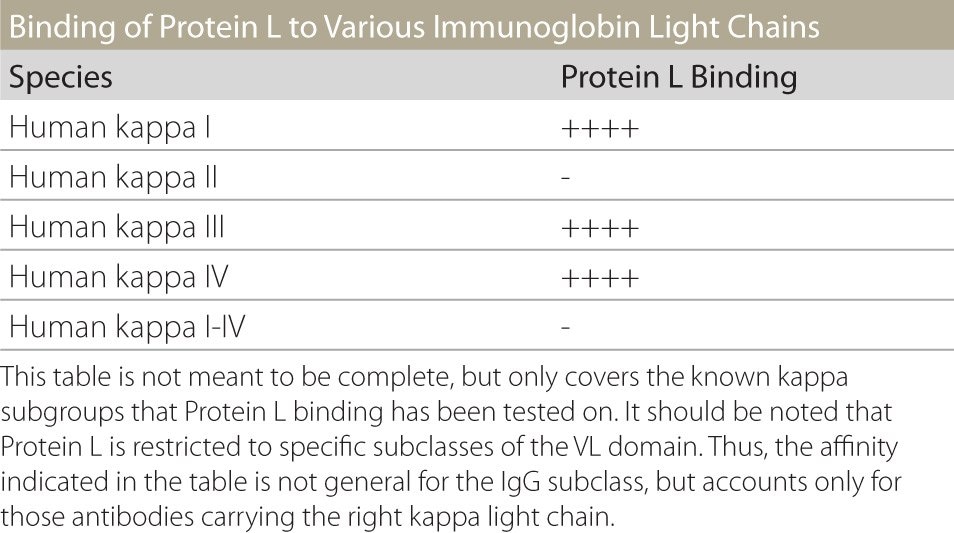 Protein A and Protein G have binding sites for the Fc portion of mammalian IgG. The capacity of these proteins for IgG varies with the species. In general, IgGs have a higher affinity for Protein G than for Protein A, and Protein G can bind IgG from a wider variety of species. The affinity of various IgG subclasses, especially from mouse and human, for Protein A varies more than for Protein G. Protein A can, therefore, be used to prepare isotypically pure IgG from some species. Protein L is suitable for isolating mouse monoclonal antibodies from cell culture supernatants without contamination by bovine IgG. 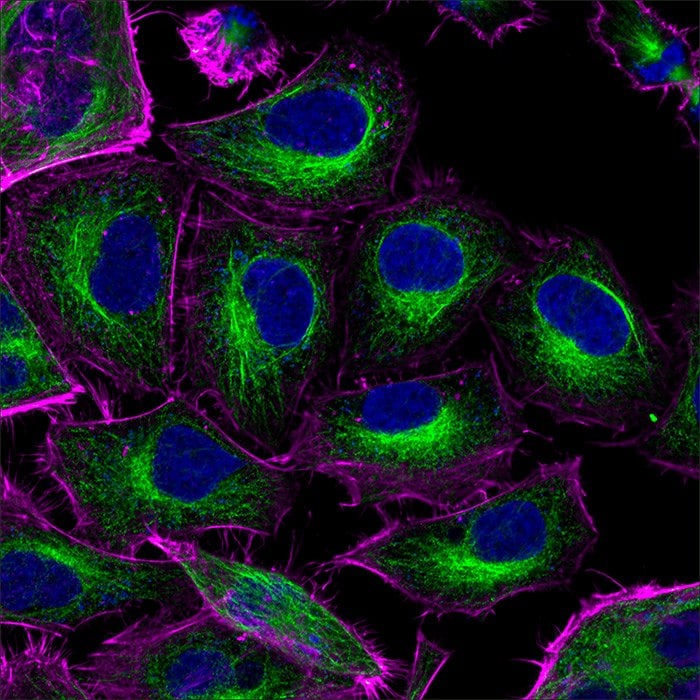 CF™ dyes are a series of highly water-soluble fluorescent dyes spanning the visible and near-infrared (near-IR) spectrum for labeling antibodies. Developed by scientists using breakthrough chemistries, the brightness, photostability, and color selection of CF™ dyes rival the quality of other commercial dyes as a result of rational dye design.

Gel Electrophoresis
Protein gel electrophoresis is used to separate proteins for purification, characterization, and detection. Methods such as native PAGE, SDS-PAGE, 2D PAGE, and isoelectric focusing (IEF) are used in preparation for downstream applications including Western blotting, mass spectrometry, and proteomic analysis.
Western Blotting
An overview of the principles and applications of Western blotting for protein detection. Includes links to detailed protocols, videos, and other resources for protein extraction, gel electrophoresis, transfer to PVDF or nitrocellulose membranes, and chemiluminescent, colorimetric, and fluorescent detection methods.
(ELISA) Enzyme-Linked Immunosorbent Assay
Enzyme-linked immunosorbent assay (ELISA) include direct, indirect, and capture (sandwich) detection formats for identifying and quantifying a specific antigen.
Immunohistochemistry
Immunohistochemistry (IHC) is a common immunostaining technique that is used by researchers to identify specific antigens of interest in healthy and diseased tissues.
Flow Cytometry
Flow cytometry is a powerful molecular and cellular biology tool that enables multi-parametric analysis of individual cells.
Protein Quantitation
Protein quantification methods, reagents, and immunoassay technology for accurately measuring the protein concentrations in a variety of samples.