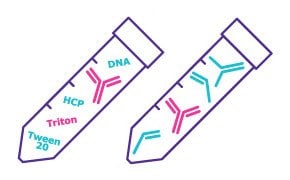 Many impurities are present in, or are generated during the mAb manufacturing process, including process or product contaminants that can derail your biotherapy’s development program. Fortunately, we have years of experience performing assays in both R&D and GMP environments, supporting data requirements at every phase of the development cycle. With state-of-the-art instrumentation and fast turnaround times, we provide reliable results to push your project forward.

Host-cell contaminants: During mAb manufacturing, process impurities can arise from the host cell used to express your drug. Host cell protein (HCP) impurities, present at ppm-levels in biotherapies, are a major immunogenicity risk because they can elicit an unpredictable immune response in patients. Their complex and diverse nature makes them challenging to detect or monitor. With acceptance criteria for host residual DNA usually set at a very low level (often ≤1.0 pg of DNA per mg of drug substance), effective removal techniques and sensitive methods of detection are critical.

Microbial battery: Many mAbs are produced in microbial organisms to benefit from rapid growth rates and high yields, making it important to monitor and control the presence of microbial contaminants. A component of the cell wall of Gram-negative bacteria, called endotoxin, produces responses ranging from fever and chills to fatal septic shock. Its removal from your mAb is not only critical, but a regulatory requirement. Bioburden testing should be employed throughout the entire mAb manufacturing process, and sterility testing is also important to inform the integrity of mAb production.

To satisfy testing needs for the following product impurities, our product contaminants assay families are structured according to size variants, charge variants, or microbiology (viable or non-viable).

Charge distribution: Occurring as a result of post-translational modifications (PTMs) during the manufacturing process, or due to chemical modifications throughout purification and storage, charge variants can have a considerable impact on the biological activity and pharmacokinetics of a mAb. Charge variant analysis is a regulatory requirement for mAbs, using techniques that include cation exchange chromatography (CEX) and capillary isoelectric focusing (cIEF).

Size distribution: Initial production material often contains size variants such as aggregates, fragments, and biomolecules exhibiting additional light chains. Since these have the potential to affect immunogenicity and potency, it is important to monitor their presence. Size exclusion chromatography (SEC) is the most commonly used method to evaluate size distribution, while techniques such as dynamic light scattering (DLS) and capillary electrophoresis sodium dodecyl sulfate gel (CE-SDS) are also highly informative.

Molecular weight analysis: Molecular weight is a major indicator of mAb identity, influenced by the nature of the light and heavy chains as well as by PTMs. Typically evaluated by intact mass (IM) analysis, mAb molecular weight can also be investigated by deglycosylating the heavy chains to remove one of the major sources of protein heterogeneity.

Modification analysis: Understanding and controlling any modifications that occur during the manufacturing process helps to generate a consistent mAb product. For example, N-glycan mapping can inform mAb stability, bioactivity, and immunogenicity, while sialic acid quantification is key to preventing excess sialylation. It is also wise to perform disulfide mapping, since manufacturing-induced disulfide reduction is known to result in poor yields during mAb harvest.

Physical attributes testing: Many different physical properties of a mAb require testing during manufacturing. These include pH, concentration, and osmolality, all of which are features essential to the manufacture of a consistent drug product.

To discuss your impurity testing needs and take the next step in securing the future of your biotherapy, fill out the form below.