What Are Biomarkers of Drug-Induced Liver Injury?

Drug-induced liver injury (DILI) is the primary adverse event that results in the withdrawal of drugs from the market.1 The liver is a multifunctional organ. As drugs may cause liver injury through various mechanisms, measurement of multiple biomarkers is required to ensure the potential for hepatotoxicity is identified early in drug development.2 Traditionally, the biomarkers of drug-induced liver injury have been alanine aminotransferase (ALT) and aspartate aminotransferase (AST) which are used to assess liver injury. However, with significant frequency, levels of these biomarkers do not accurately reflect injury as seen by histopathology.3 Therefore, the Predictive Safety Testing Consortium (PSTC), in collaboration with its partnering regulatory agencies, has been researching other, potentially more predictive biomarkers of liver injury.3

Multiplex immunoassays enable researchers to measure multiple biomarkers of liver injury at once. The data below describes a Luminex® bead-based multiplex immunoassay (the MILLIPLEX® Rat Liver Injury Panel) that simultaneously measures the following hepatotoxicity biomarkers in the blood:

These biomarkers are hepatocellular and hepatobiliary enzymes that are released into circulation upon the occurrence of liver injury.4

The involvement of cytokines in liver injury response was also investigated. Cytokines have been under investigation as potential biomarkers of DILI. A possible mechanism is that molecules released in the early stages of hepatocellular necrosis are recognized by toll-like receptors and thereby lead to the release of pro-inflammatory cytokines.5.6 27 cytokines were measured using the MILLIPLEX® Rat Cytokine/Chemokine Panel, and the dynamic changes found in 8 cytokines paralleled changes in hepatocellular enzyme biomarkers, suggesting that these cytokines were indeed involved in the pathogenesis of hepatotoxicity.

To appraise the performance of the immunoassays, acute acetaminophen (APAP)- and thioacetamide (TAA)-induced rat hepatotoxicity models were established. APAP overdose is the most common cause of acute liver failure in the West. Hepatocellular injury is primarily initiated by APAP metabolite CYP2E1 bioactivation to form reactive intermediates that deplete glutathione and then bind to critical cellular macromolecules. High doses of APAP were shown to induce rat centrilobular hepatocyte necrosis, although less mitochondria dysfunction was found. TAA is a potent hepatotoxicant that undergoes a 2-step bioactivation mediated by microsomal CYP2E1 to thioacetamide sulphoxide (TASO), and further to a reactive metabolite thioacetamide-S, S-dioxide (TASO2). These reactive metabolites may covalently bind to various proteins that also lead to centrilobular hepatocyte necrosis.

Male Sprague Dawley rats (7 - 8 weeks old) were subjected to fasting conditions overnight and then treated with a single intraperitoneal (IP) injection of acetaminophen in 20% Tween® 80 solution at a dose of 1 g/kg. Before, and approximately 24, 48, and 72 hours after the dose, 250 – 300 μL blood was collected via the sublingual vein under isoflurane anesthetization. 96 hours after the acetaminophen dose, rats were euthanized, and blood samples were collected.

Male Sprague Dawley rats (7 - 8 weeks old) were subjected to fasting conditions overnight and then treated with a single IP injection of thioacetamide in phosphate-buffered saline (PBS) solution at a dose of 300 mg/kg. Rats were euthanized 24 hours after the dose, and blood samples were collected.

Assays were conducted using the MILLIPLEX® Rat Liver Injury Panel and the Rat Cytokine/Chemokine Panel following the instructions in the included protocols.

The ARG1, GOT1, 5'NT, GSTα, and SDH enzymatic assays were purchased from our company, Crystal Chern, Cayman Chemical, and New York University at Buffalo, respectively, and performed as instructed by the manufacturer’s protocols. Pro-inflammatory cytokines are released during the early stages of hepatocellular necrosis because toll-like receptors on macrophages recognize certain molecules (DNA fragments, DNA binding proteins, etc.).5 These cytokines cause the release of acute phase proteins, which further affect liver cell injury. To compare the dynamics of cytokine release with increases in hepatotoxicity biomarker levels after acetaminophen treatment, both sets of proteins in blood samples taken at the same time points were measured. The results showed that the 5 hepatotoxicity biomarkers changed with the same dynamics, as did the cytokines MCP-1, GRO/KC/CINC-1, and MIP1α (Figure 3).

Because there are known differences in the tissues affected and molecular mechanisms between different preclinical DILI models, the experiment in Figure 3 was repeated with a thioacetamide-induced rat model of DILI (Figures 4 and 5).7 27 prominent cytokines were measured by the MILLIPLEX® Rat Cytokine/Chemokine Panel and showed distinctive cytokine expression patterns in APAP and TAA models. 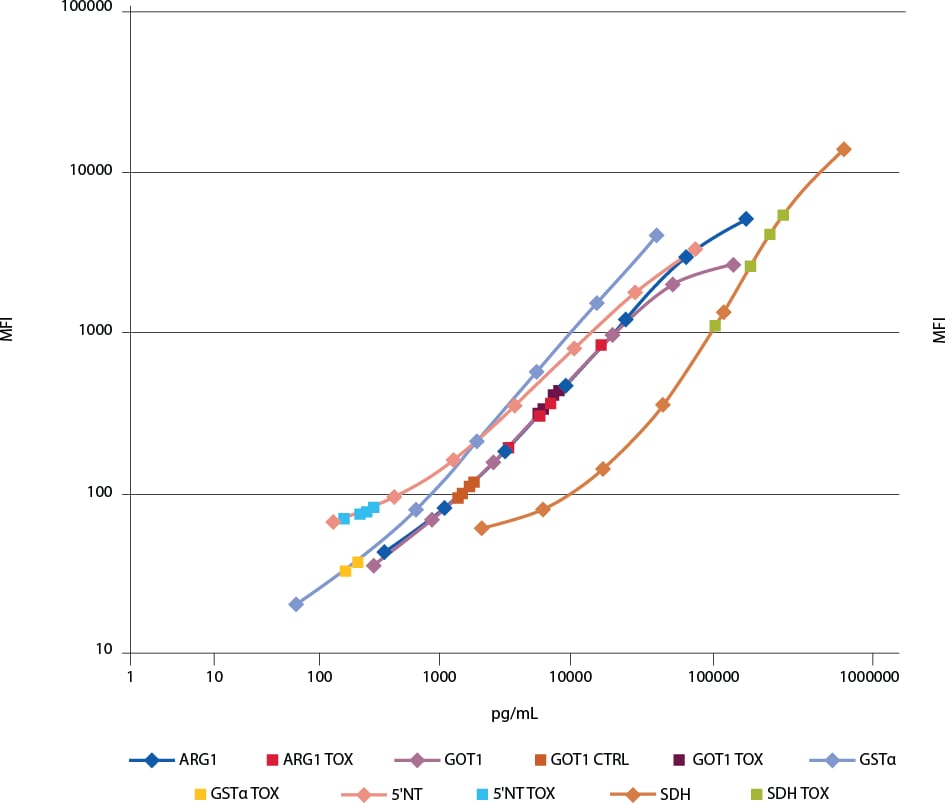 Figure 5.Leptin, MIP-1α, IL-10, IL-18, MCP-1, IP-10, GRO, VEGF, Fractalkine, and LIX are elevated in a rat thioacetamide liver injury model. Before and 24 hours after dosing, ~250 μL of blood was collected and plasma samples were prepared from each rat. The MILLIPLEX® Rat Cytokine/Chemokine Panel was used to quantify 27 cytokines.

Figures 4 and 5, like Figure 1, show the standard curves for each panel used, on which are plotted the MFI corresponding to biomarker levels in untreated (“CTRL”) and thioacetamide-treated (“TOX”) rat plasma samples. In response to thioacetamide injection, blood protein levels of Leptin, MIP-1α, IL-10, IL-18, MCP-1, IP-10, GRO, VEGF, Fractalkine, and LIX were up-regulated, along with the hepatotoxicity biomarkers.

Acetaminophen and thioacetamide are potent hepatotoxicants that induce centrilobular hepatocyte necrosis in rat. Most liver injury biomarkers are hepatocellular enzymes that have been released into the bloodstream upon injury to the hepatocytes. Acute liver injury is associated with robust and varied immune responses. Changes in levels of circulating cytokines have also been proposed as possible biomarkers. The dynamic changes of hepatotoxicity biomarkers and circulating cytokines were demonstrated in two rat liver injury models. The peak increases were observed 24 hours after drug exposure. Strongly correlated with the protein concentration data, robust increases in enzyme activities were also observed at this time point.

These quantitative immunoassays are a powerful way for investigators to monitor hepatotoxicity in their research.