With complex neurodegenerative diseases such as Alzheimer’s disease, integrating multiplex and high sensitivity immunoassays to detect biomarkers can help researchers get a better understanding of disease mechanisms. Read on to learn how this concept was applied with MILLIPLEX® multiplex and SMC™ high sensitivity immunoassay detection of Alzheimer’s disease biomarkers in human cerebrospinal fluid, plasma, and serum samples.

Why Should You Combine Multiplex and High Sensitivity Immunoassays in AD Research?

The need for blood-based biomarkers of AD has driven a continuous search for novel candidates 2. However, the identification of blood-based biomarkers may be limited by the sensitivity of standard immunoassay methodologies. High-sensitivity immunoassay technologies can transform neurodegenerative disease research by enabling the measurement of low-abundant proteins in a variety of biofluids and create opportunities for the identification of novel biomarkers 3,4.

Human CSF, plasma, and serum were obtained from AD patients and non-AD controls (normal) via commercial vendors (Discovery Life Sciences, BioIVT, and PrecisionMed). Samples were either run neat or diluted, according to the kit protocol. An unpaired t-test was used to calculate two-tail p-values for all analytes (GraphPad Prism).

MILLIPLEX® multiplex assays were performed in 96-well plates according to the product instruction manuals. Mean Fluorescence Intensity (MFI) was measured on a Luminex® 200™ system and data were analyzed with MILLIPLEX® Analyst 5.1 Software.

The following multiplex assays were used:

Several established and emerging neurodegenerative disease biomarkers were examined in the CSF samples of normal and AD patients, before assessing biomarker detection in serum and plasma samples. Standard curves for each of the kits that were used are shown in Figure 1. CSF samples from AD patients and healthy controls (normal) were evaluated with the multiplex kits, and differences in specific biomarker concentrations were determined. Each kit revealed alterations in AD CSF compared to control samples (Figure 2). 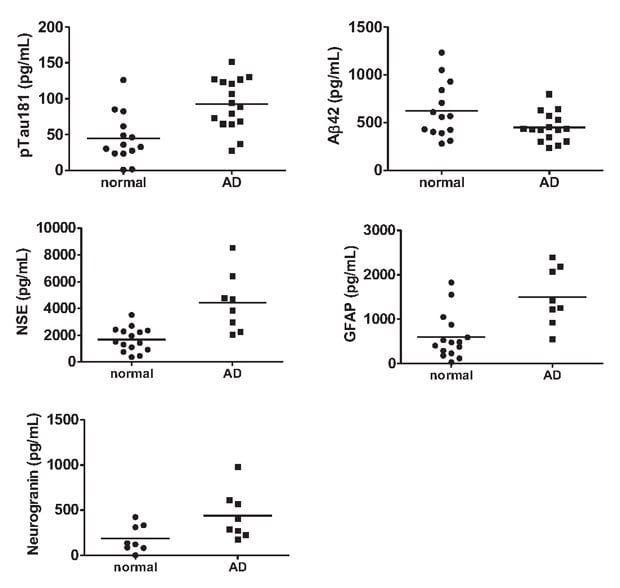 For each kit, sample sizes are as follows: While several analytes demonstrated potential as blood-based biomarkers of AD, the low abundance of other proteins necessitated the development of assays on a high-sensitivity platform using SMC™ technology. SMC™ technology enabled the measurement of the amyloid beta peptides in human plasma samples (Figure 4). A small increase in plasma Aβ40 (p=0.028) was associated with AD. No difference was observed in plasma Aβ42 values. Importantly, the SMC™ Aβ42 kit successfully detected the decrease in CSF Aβ42 (p=0.0116) which is characteristic of AD. A difference in Aβ40 levels in the CSF (p=0.0055) was also observed. Excellent correlation between the SMC™ instrumentation platforms was demonstrated for the Aβ40 and Aβ42 kits by reading sequentially on the SMCxPRO™ instrument followed by the ERENNA® instrument. 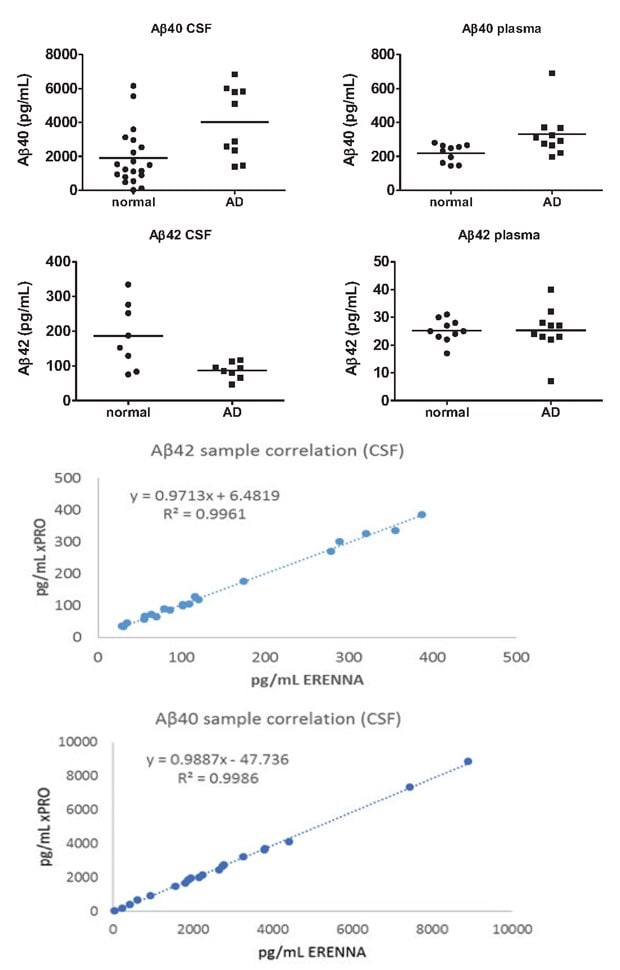 Aβ40 and Aβ42 were measured in CSF and plasma from AD patients and healthy controls with their respective high-sensitivity SMC™ immunoassays. Differences in Aβ40 between AD and healthy controls were observed in both plasma (p=0.028) and CSF (p=0.0055). A decrease in Aβ42 was observed in AD CSF (p=0.0116), although no change was observed in plasma (p=0.9733). The same plates used to measure CSF on the SMCxPRO™ instrument were subsequently analyzed on the ERENNA® instrument, demonstrating a high correlation between the two platforms as shown in Figure 4.

For each kit, sample sizes are as follows:

MILLIPLEX® and SMC™ immunoassays were used to measure a multitude of proteins linked to neurodegenerative disease in CSF, plasma, and serum samples. Established AD biomarkers such as Aβ42 and phospho-Tau showed the expected patterns of alteration in CSF. Additionally, proteins such as Neurogranin and GFAP demonstrated elevated concentrations in AD CSF. Potential blood-based biomarkers of AD were analyzed in plasma and serum samples, with several promising candidates emerging. Future studies will be integral to determining whether these observations can be corroborated with larger sample cohorts.

By adopting a fit-for-purpose approach, multiple technology platforms and immunoassays were integrated to analyze AD biomarkers in CSF, plasma, and serum samples. These MILLIPLEX® and SMC™ immunoassays provide researchers with reliable resources for studying a breadth of neurodegenerative disease biomarkers in a variety of biofluids.

Watch the webinar below to see a presentation on this research.