In this study, optimized methods are presented for sample preparation and chiral chromatography for the LC/MS analysis of amphetamine and methamphetamine enantiomers in urine.

Methamphetamine and amphetamine, powerful CNS stimulants that have a variety of ethical uses, have side effects of increased confidence, sociability, and energy that have resulted in their extensive abuse as recreational psychoactive drugs. This extends to their abuse in sports because of the additional properties of increased mental alertness and suppression of fatigue.1 Negative side effects include hypertension and tachycardia. In the usually uncontrolled situations of drug abuse, they exhibit similar psychoactive effects, although amphetamine is generally less potent than methamphetamine.

Illicit use of these drugs continues to be high. Public Health England recently reported that the number of people stating their main injecting drug to be amphetamines and amphetamine-type substances (such as mephedrone) nearly tripled between 2002 and 2012.2 Additionally, unlike the less-volatile amphetamine sulphate, methamphetamine hydrochloride (sometimes known as "ice" or "crystal meth") can be smoked, giving highs that are similar to crack cocaine, although significantly longer lasting. It has been reported that routine co-monitoring of methamphetamine and amphetamine is not normally carried out, so there is little information on which is more widely used. It was noted however, that amphetamine is more widely available than methamphetamine in Europe, whereas the reverse is true for North America and Asia.3

Amphetamine and methamphetamine are chiral molecules (Figure 1). In both cases the D-enantiomer has greater biological activity than the L-enantiomer. Although methamphetamine is a controlled substance (Class A in Europe and Schedule II in the US, both as individual enantiomers and as the racemate), the L-isomer is in fact used in several over-the-counter medicines (e.g. Vicks® inhaler in North America) and so can alter the true level arising from abuse of the drug. The analysis is further complicated by the fact that L-methamphetamine is also a metabolite of certain therapeutic drugs, such as selegiline, a treatment for early-onset Parkinson's disease, depression, and dementia. Amphetamine quantification is more complex, again, simply because it is also the main metabolite of methamphetamine. The traditionally used method for drug analysis, immunoassay, cannot distinguish between the enantiomers and so can easily give incomplete, inconclusive results.

Culpability for the illicit use of amphetamine and methamphetamine rests on the ability to distinguish the contribution to the measured abused product from possible alternative sources of the L-enantiomer. Therefore, the separation of the enantiomers is a more accurate approach for testing. A chiral method can also be used to indicate the synthetic route that was used by the illegal source, which can be useful as part of a criminal investigation. Indeed, detection of just the D-methamphetamine isomer has been found in product prepared through either ephedrine or pseudoephedrine4. 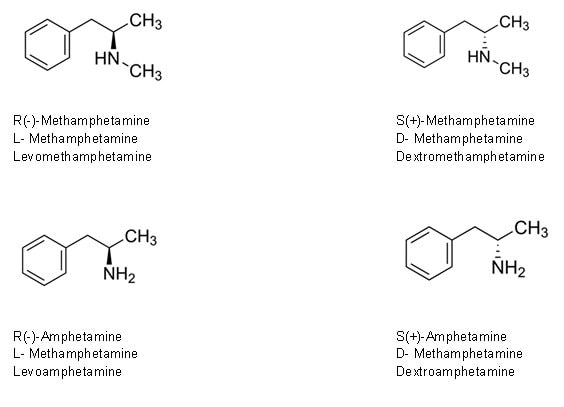 Figure 1.Structures of D- and L-Amphetamine and Methamphetamine

Chiral GC and LC are both available as possible bioanalytical methods, although LC/MS/MS is becoming the method of choice for its greater flexibility and coverage of a far wider range of compounds of toxicological interest.

GC inevitably involves derivatization for these types of molecules, usually as the trifluoroacetate on chiral GC phases. An alternative in a recent study utilized (R)(-)-α-methoxy-α-(trifluoromethyl)phenylacetyl chloride (MTPA), separating the enantiomers on an achiral polysiloxane phase.4 It provided a method that was suitable for samples also containing the related MDA, MDMA, and MDEA, with a limit of quantification (LOQ) in urine of <10 μg/L. In general, however, sample preparation and methodology for HPLC is simpler and more amenable to biological samples and so was chosen for this study. A method was developed and optimized for resolution, retention, and LOQ.

Astec® CHIROBIOTIC® HPLC chiral stationary phases (CSPs), based on bonded macrocyclic glycopeptides, were chosen because of their high compatibility with mass spectrometric (MS) detection and their suitability for polar molecules. Another advantage of Astec CHIROBIOTIC CSPs for clinical and forensic applications is their robustness and ability to withstand repeated injections of biological samples under conditions that other CSPs cannot tolerate. Astec CHIROBIOTIC CSPs show enantioselectivity in both reversed-phase and polar ionic mobile phases, the latter defined as mobile phases containing >90% organic modifier with water and ionic additives comprising <10% in varying proportions.

Methamphetamine was run through the reversed-phase and polar ionic mode chiral screens and found to show the highest selectivity on Astec CHIROBIOTIC V2 in the polar ionic mode with a choice of either acetic acid/ammonium hydroxide or ammonium trifluoroacetate salt additives. Both of these additive systems were investigated as part of the optimization process.

Although typically the choice for the polar ionic mode is 100% organic, essentially a non-aqueous phase, up to 10% water can be added before the mechanism changes to a reversed-phase one. The additives used in the polar ionic mode are typically an acid and a base or a volatile salt. Their function is to enhance ionic interactions with the ionizable surface of the CSP, and have a concomitant beneficial effect of increasing analyte ionization in the MS. The addition of water to the mobile phase, up to 10%, maintains the solubility of the ionic additives and generally improves the robustness and repeatability of the method.

The mechanism of separation the Astec CHIROBIOTIC, as for all chiral stationary phases, is likely a complex one. The surface of the macrocyclic glycopeptides includes a variety of possible interactive sites, such as amide (peptide), phenolic, ionic (amine or carboxylic acid) and aromatic chloro moieties, in addition to inclusion complexing pockets. Astec CHIROBIOTIC V2, which uses vancomycin as the chiral selector, has a carboxylic acid group and is therefore particularly suited to the separation of many amines, while the other functional groups are thought to enhance the separation through hydrogen bonding.

Using a 15 cm x 4.6 mm, 5 µm Astec CHIROBIOTIC V2 column, two polar ionic mobile phases were compared for retention and resolution. Both comprised methanol:water (95:5). The first mobile phase used acetic acid and ammonium hydroxide (1:0.02) as the ionic additives. The second used 0.05% ammonium trifluoroacetate. Results appear in Figure 2a and Figure 2b. In both cases, baseline resolution was obtained, with the D- or S(+) enantiomer eluting before the L- or R(-) enantiomer. Ammonium trifluoroacetate gave less retention and resolution. 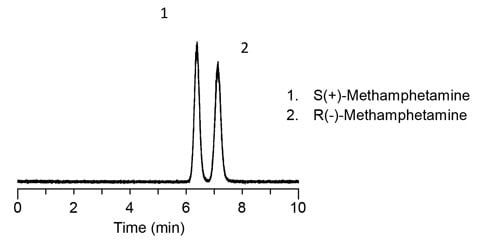 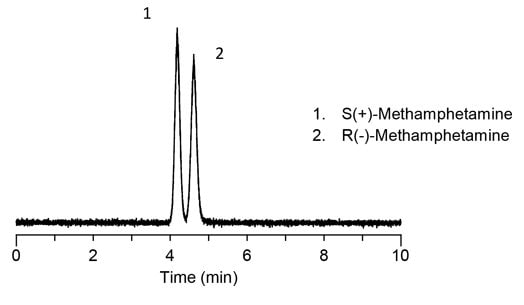 These two mobile phase systems were then compared for sensitivity. With data shown in Figure 3, by comparing the signal to noise ratios, it was determined that the method employing the acetic acid/ammonium hydroxide mobile phase provided the lowest LOQ of less than 12.5 ng/mL and so was chosen as the optimum system. A calibration curve was also created and the method found to be linear from 12.5 to 240 ng/mL for R(-)-methamphetamine. The same chromatographic conditions were tested for amphetamine and found to provide high resolution, with slightly lower retention than methamphetamine (Figure 4). 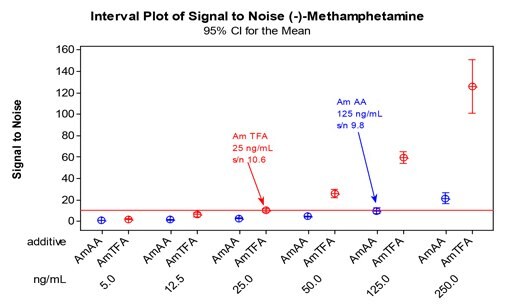 Figure 3.A Study of the S/N Ratio for Optimization of LOQ 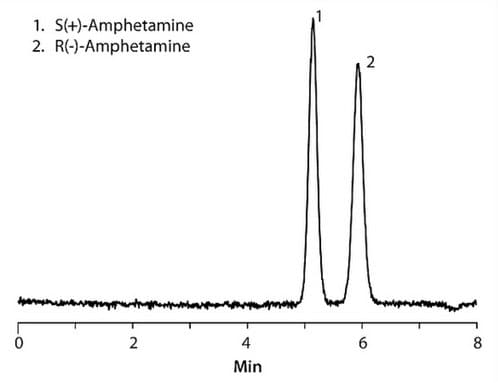 Conditions same as Figure 2, except:

Simultaneous Analysis of Amphetamine and Methamphetamine

Although the compounds are not isobaric, a simultaneous method was sought that would provide baseline resolution of all four enantiomers. The optimal conditions for methamphetamine and amphetamine analyzed separately resulted in a coelution of two of the four peaks for the simultaneous separation of all four enantiomers. While MS takes sufficient care of this overlap, a study was also undertaken to optimize the method. Changes in the acid/base ratio were studied for their impact on resolution and a change to an Astec CHIROBIOTIC V column (same chiral selector but different bonding chemistry) was investigated. However, neither approach provided the required resolution. Success was achieved by simply increasing the column length and temperature (Figure 5). 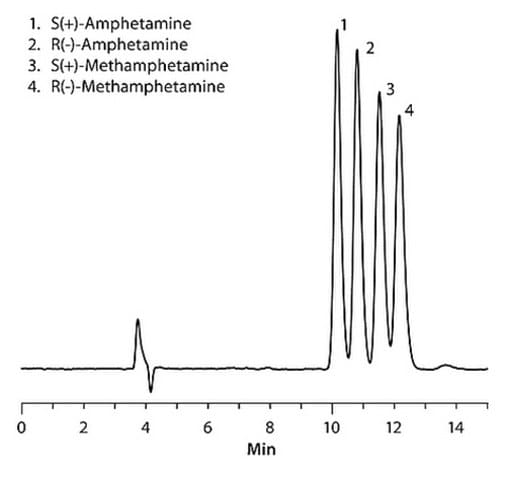 Figure 5.Simultaneous LC/MS Analysis of the Enantiomers of Amphetamine and Methamphetamine on Astec CHIROBIOTIC V2

Effective sample prep removes sample matrix components that reduce sensitivity, decrease the method’s robustness, or both. A comparison was carried out between liquid-liquid extraction and SPE for the optimum extraction of methamphetamine from urine.

Following a previously published method, a 125 µL aliquot of synthetic urine was spiked with methamphetamine (125 ng/mL each enantiomer) and 1 mL diethyl ether was added. After vortexing for 30 minutes, the sample was centrifuged at 10,000 rpm for 10 minutes. A 500 µL aliquot of the upper layer (organic) was taken and evaporated to dryness under nitrogen at 55 °C. This was then reconstituted in 500 µL mobile phase and filtered through a 0.22 µm PVDF filter. 6

For the SPE method, 1 mL of synthetic urine was spiked with 25 ng/mL of each enantiomer, and acidified to pH 3-4 with formic acid. After conditioning a Supel™-Select SCX SPE 96-well plate (30 mg/well) with 1 mL 1% formic acid in acetonitrile followed by 1 mL water, it was loaded with 1 mL of the urine sample. The plate was washed with 2 mL water followed by 1 mL 25% methanol. For amphetamine, 1 mL of 5 mM dibasic ammonium phosphate in 50% methanol was used as an intermediate wash step. The analytes were eluted from the plate with 1 mL 10% ammonium hydroxide in acetonitrile. The eluate was evaporated to dryness under nitrogen at 40 °C and reconstituted in 1 mL mobile phase.

The comparison of the L/L and SPE methods can be seen in Figure 6. Note that a significantly cleaner extract was achieved using the SPE method, which removed almost all of the early-eluting matrix interferences and enabled a higher analyte recovery. 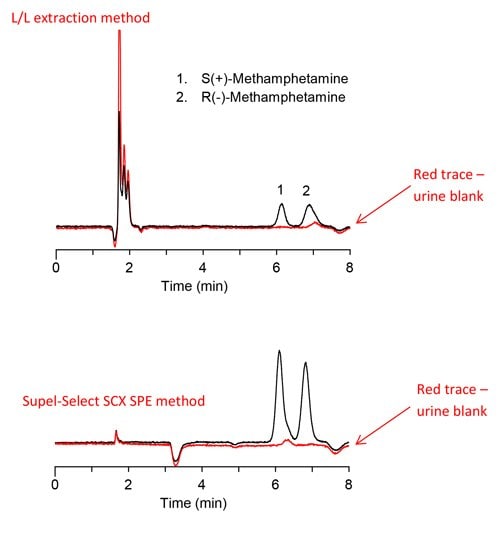 LC/MS conditions same as Figure 2 except:

Astec CHIROBIOTIC V2, with the vancomycin chiral selector, provided rapid, baseline resolution of the enantiomers of methamphetamine and amphetamine. Since the compounds are not isobaric, the same method could be applied to the LC/MS analysis of all four enantiomers, should that be desired. The choice of acetic acid and ammonium hydroxide as mobile phase additives to methanol-water in the polar ionic mode gave the optimal LOQ and highest resolution for a sensitive, high throughput chiral screening of amphetamine and methamphetamine, either individually or simultaneously. Sample preparation using a Supel-Select SCX SPE removed many of the interferences from the urine matrix. The sample prep and LC/MS techniques provide a robust and easily transferrable method.