An alternative to the cumbersome USP and EP methods using LC/MS/MS detection and a Titan™ C18 UHPLC column to identify riboflavin and its impurities is described here. This new method is also compatible with UV-Vis detection

Riboflavin (vitamin B2) is an essential micronutrient, synthesized by plants and many microorganisms, but not by higher animals. It is a precursor of coenzymes that are required for the enzymatic oxidation of carbohydrates, and is essential to basic metabolism. Riboflavin is a common food and feed additive, and a fortificant in infant formula and cereal. It is important to establish the purity of the riboflavin because of its widespread addition to food. The USP (US Pharmacopeia) and European Pharmacopeia (EP) have long-standing analytical methods for riboflavin impurity analysis, but the methods are time-consuming and labor intensive, and are not ideally suited to modern detection methods.1,2

The current USP method for riboflavin impurity analysis is non-quantitative, and calls for the use of ion-pair chromatography to separate the riboflavin from four major impurity peaks. Both EP and USP methods call for solubilization in strong base (0.1 M NaOH), which causes analyte degradation and formation of sodium adducts that compromise mass spectrometric (MS) detection.

The purpose of this work was to develop an MS-compatible alternative to the USP and EP methods. In addition to improving the specificity of the method with MS detection, reducing the analysis time was also a desired outcome. Improvements were made on two levels: First, LC/MS compatibility was improved by replacing the sodium hydroxide solubilizing agent and eliminating ion-pair reagents. Second, fast gradients significantly reduced the analysis time without sacrificing resolution. Known impurities were confirmed, and other impurities were identified using reference standards.

Riboflavin certified reference material (CRM) from Sigma-Aldrich/RTC was used in this study. Compound B (7,8-dimethylbenzo[g]pteridine- 2,4 (1H,3H)-dione) was not available as an individual standard; however, it was present in the riboflavin CRM. Other compounds were purchased from commercial sources. MRM (multiple reaction monitoring) transitions were determined and are reported in Table 1. Three transitions were used for each ion. Figure 1 shows the structures, names, monoisotopic masses, and molecular formulas of the compounds studied. Structures for each of these major impurities were confirmed by MS. Because these compounds are not soluble in methanol or water, a number of experiments were performed to identify an appropriate diluent. Ultimately, DMSO was chosen because it completely solubilized riboflavin and impurities. A stock solution of riboflavin was prepared in DMSO at 1 mg/mL with 5 minutes of sonication. This stock solution was diluted as necessary and used for all future experiments. It was stored in the freezer when not in use.

LC and MS conditions are shown in Figure 2. The LC column was a Titan™ C18, 10 cm ~ 2.1 mm I.D., packed with 1.9 µM totally porous, monodisperse silica particles. The mobile phase was a simple gradient of acetonitrile-water in 0.1% formic acid. A tune solution of 1 µg/mL in 50:50 (0.1% formic acid in water: 0.1% formic acid in acetonitrile) was used for riboflavin and Compound A. Compounds C and D used the same solvent system at 0.6 µg/mL. 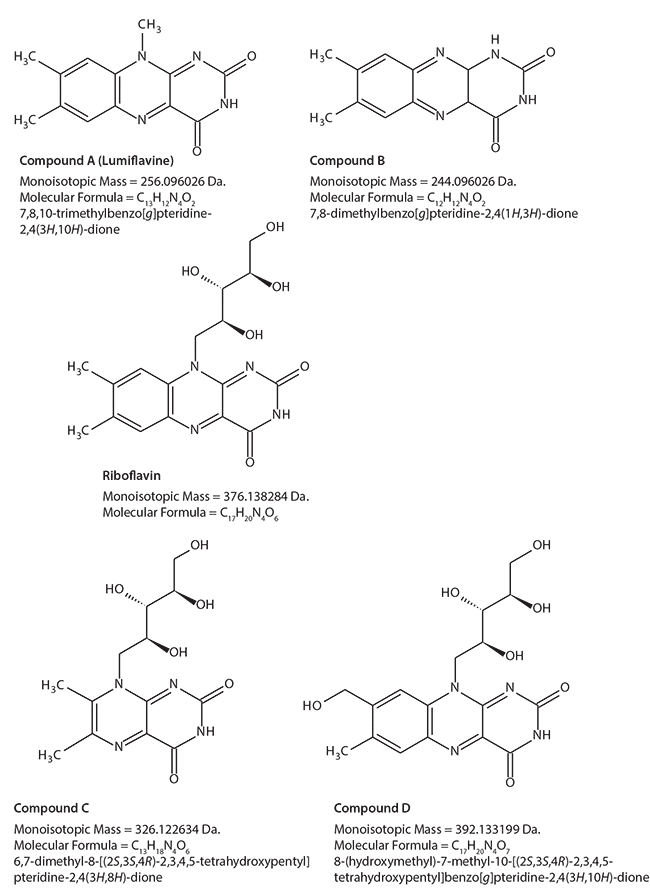 Literature methods for the analysis of riboflavin and impurities from the USP and EP report run times in excess of one hour and use MS-inhibiting sodium hydroxide and ion-pair reagents. The method reported here provides a viable alternative. Figure 2 shows the MRM results for riboflavin and the related impurities. The combination of the Titan™ C18 column and rapid acetonitrile gradient provided excellent resolution and short analysis time under conditions compatible with MS detection. The replacement of sodium hydroxide with DMSO and elimination of the ion-pair reagents permitted MS detection and the concurrent improvement in specificity and selectivity. The method is also compatible with UV detection.