Praziquantel (PZQ) is used in the aquarium industry to treat monogenea and other parasites. This is often done through a bath immersion treatment, where medications are dissolved in aquarium water rather than dosed directly to a target organism.

Depending on the details of the treatment, it can be done in a separate holding tank or directly in the system being treated. In order to determine whether the therapeutic level of the medication is reached, and for how long that level persists, it is important to test medication concentrations in the treatment water. The current methodology for the determination of PZQ in aquarium water utilizes solid phase extraction (SPE) filtration to separate the analyte from the aquarium water sample. The extract is then analyzed using high performance liquid chromatography (HPLC).

Treatments may not be monitored to the extent desirable due to the time and cost of materials involved in the analysis. The goal of this study was to simplify the analysis and to decrease overall analysis time primarily by eliminating the SPE extraction steps.

The current method was developed by Walt Disney World Resort Epcot, The Living Seas1, which referenced a Journal of Chromatography article2 for the determination of Praziquantel in serum. While the HPLC determination of this analyte in serum would require extraction because of the sample matrix, seawater in small injection volumes should not present a problem so long as the organic concentration of the mobile phase is kept low enough that salts will not precipitate from solution. At 40% acetonitrile in the mobile phase, the salts in the sample do not precipitate out of solution. By using a monolithic silica column, SPE sample prep can be eliminated because of this support’s ability to tolerate dirty samples. Changes to acetonitrile concentration of the moblie phase, injection size, and a simplified sample prep increase the method‘s sensitivity and efficiency and add up to significant time savings. These improvements are further discussed below. Additionally, these changes reduce the acetonitrile consumption for sample processing and completely eliminate the use of methanol. This will reduce the amount of solvent waste generated by the method.

The following experiments were performed on a Waters ACQUITY Arc with PDA detection at 220 nm.

The chromatogram in Figure 1 is from the Georgia Aquarium. It is a 50 μL injection, and mobile phase is 40% acetonitrile (ACN). Because of the fairly large injection volume, the Praziquantel peak is overloading the column as evidenced by poor peak shape.

A Chromolith® HighResolution RP-18 endcapped 100-4.6 HPLC column was used for the remainder of the chromatograms presented below.

The analysis in Figure 1, that utilized a Partisil ODS3 column, was duplicated on a Chromolith® HR. Figure 2 (purple line) is a 50 μL injection of a 2 mg/L PZQ standard in ACN. The analysis time was greatly reduced from 14 minutes in Figure 1 to about 2 minutes on the Chromolith® column. Peak symmetry was greatly improved with the Chromolith® column. To simulate direct injection of a seawater sample, a standard was prepared in water containing 3.5% NaCl (Figure 2, green line). In this chromatogram you can see the baseline disturbance of the injection volume as the injection solvent elutes in the dead volume. 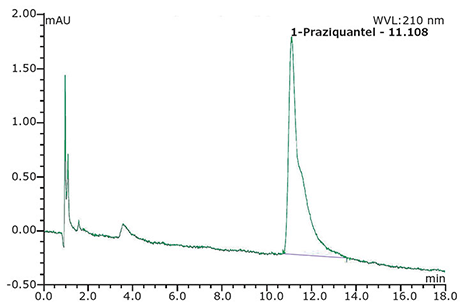 Figure 3 is again a 2 mg/L PZQ sample injected on a Chromolith® HR, but the injecton volume was reduced to 10μL. Peak resolution and shape are significantly improved while sensitivity is maintained even with the lower injection volume.

For the remainder of these experiments, a 50% acetonitrile mobile phase was used (represented by the green trace chromatogram in Figure 4) as it presents a good compromise of analysis time and solvent use.

At this point we have optimized the SPE separation from the original Disney technique to decrease organic solvent usage, and improve separation efficiency. In the next section, we demonstrate sample preparation without SPE.

Figure 5 is a 10 μL direct injection (no SPE) of a treatment water sample from Georgia Aquarium containing 5.2 mg/L PZQ. This demonstrated that the elimination of sample prep did not adversely affect the analysis.

Treatment samples that were received from Georgia Aquarium were spiked with 10mg/L PZQ. In Figure 6 the original sample (green trace) containing 5.2mg/L PZQ and the spiked sample (purple trace) are overlaid. 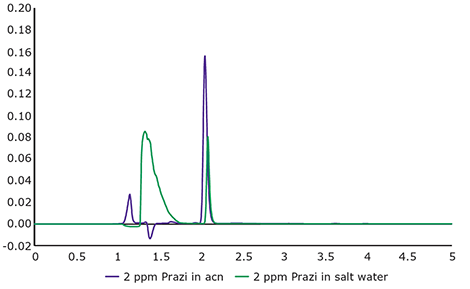 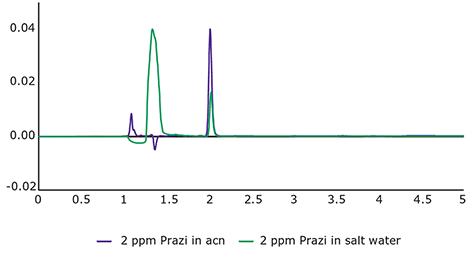 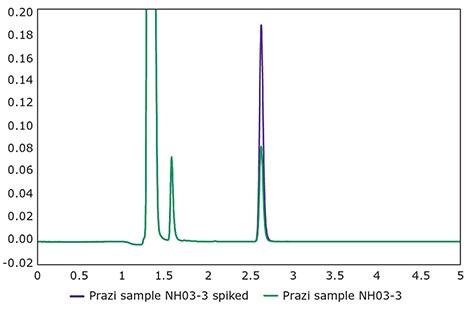 Spike recovery was calculated and is displayed in Table 1 for several treatment samples.

The HPLC system was calibrated using 5 standards prepared in ACN between 1.25 and 20 mg/L

Praziquantel. The calibration curve and data are displayed in Figure 7 and the correlation is 1.000.

The method detection limit (MDL) was calculated from 6 replicate injections of a 0.625mg/L standard. MDL was calculated to be 0.015mg/L using the students’ t-test method based on the data represented in Table 2 and Figure 8. 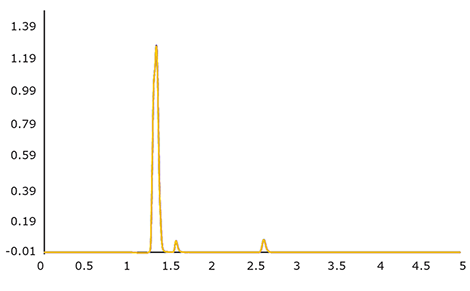 Figure 9.10 injections from a series of 500 repeat injections of a composite sample from PZQ treatments at Georgia Aquarium.

To evaluate if column life will be affected by multiple injections of the seawater sample matrix, a series of 500 injections of a composite of the samples provided by Georgia Aquarium was performed. Figure 9 is an overlay of 10 injections from the 500 injection sequence. These injections were equally spaced (every 50 injections) throughout the sequence. Both retention time and response remained stable over 500 injections. The column pressure did increase throughout the run from about 950 psi to 1800 psi. The lower column pressure at the beginning of the 500 injection series was easily restored by flushing the system with 90% water and 10% ACN. This showed that the column and HPLC system can be flushed clean. It is recommended to include a similar flush step at the end of each sequence of samples to properly maintain system pressure.

Table 3 is a comparison of the method described in this article with the original SPE method for detecting PZQ in seawater. The samples are from treatments carried out at Georgia Aquarium. The results of the two methods are comparable.

In addition, 84% less acetonitrile is consumed due to elimination of extraction solvents and shorter analysis time. This makes it a greener method by reducing solvent waste produced in the lab.

The new method provides reliable and sensitive results, with recoveries >95% and a method detection limit (MDL) of 0.015 mg/L. The development of the new method makes Praziquantel testing more efficient and cost effective, which will allow an increase in the measurement frequency for monitoring treatments.