Acrylamide is a commonly analyzed food-borne carcinogen. MilliporeSigma has convenient kits, LC and GC columns and sample prep methods for fast and reliable analysis of acrylamide by both analytical techniques.

FORMATION AND HEALTH RISKS OF ACRYLAMIDE IN FOOD

Acrylamide analysis has been a very hot topic since the chemical was identified in food in 2002 by researchers at the Swedish National Food Administration.1 Since then, alarmingly high concentrations of acrylamide have been found in many popular processed foods, including French fries, potato chips, breakfast cereals, coffee, chocolate, peanut butter, crisp bread, and pastries. Researchers at the Department of Environmental Chemistry, Stockholm University, measured moderate levels of acrylamide (5-50 μg/kg) in heated protein-rich foods and higher levels (150-4,000 μg/kg) in carbohydrate-rich foods, such as potatoes and bread. Acrylamide could not be detected in unheated control or boiled foods (<5 μg/kg). Based on average consumption levels, consuming certain heated foods could lead to a daily intake of a few tenths of micrograms of acrylamide.2

Acrylamide ends up in food via two routes: as a leachate from packaging materials and as an unintentional consequence of the cooking process when high carbohydrate, low protein foods are fried, roasted, or baked at high temperatures. A proposed mechanism of its formation is the reaction of asparagine and a carbonyl-containing compound. The mechanism involves formation of a Schiff base followed by decarboxylation and elimination of either ammonia or a substituted imine to yield acrylamide.3 Temperature plays an important role in the reaction.

In February 2005, the Joint FAO/WHO Expert Committee on Food Additives and Contaminants (JECFA) met to consider the possible health risks associated with acrylamide and other food contaminants.4 Although early reports suggested that acrylamide is a neurotoxin, reproductive toxin and teratogen, the Committee concluded that cancer is the most important toxic effect of acrylamide and that consumption of foods with acrylamide at levels currently found in some processed foods poses a public health concern. The low threshold of toxicity coupled with the high degree of activity surrounding acrylamide research necessitates reliable, fast and sensitive analytical methods.

A review of the scientific literature shows that many different analytical approaches have been applied to the analysis of acrylamide in food, with GC-MS and LC-MS accounting for the majority of the citations. Analysis of acrylamide in food is difficult because of the high level of endogenous matrix interferences inherent to starchy foods. Sample cleanup is necessary to prevent starches and oils from interfering with GC-MS or LC-MS analyses.

A common GC-MS technique for acrylamide analysis in food is based on a method developed by Grob, et al.5 The sample preparation involves several steps (Figure 1): swelling the sample in water, centrifugation, addition of small amount of oil, evaporation, reconstitution in acetonitrile, and removal of fats and lipids by hexane extraction. Internal standards are added both before and after extraction. The acetonitrile extract containing the acrylamide is analyzed by GC-MS on a Carbowax® 20 M capillary column with positive ion chemical ionization mass spectroscopic detection. Supelco SUPELCO- WAXTM 10 capillary columns are ideally suited for the separation and MS detection. 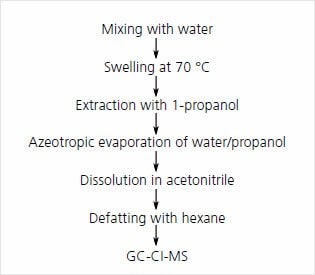 The Grob method requires several high quality reagents and standards that initially were not available from a single supplier. To address this, scientists at MilliporeSigma developed a ready-to-use kit that makes acrylamide determination faster and easier. The Acrylamide Kit (Table 1) contains all the necessary standards and solvents for twelve determinations of acrylamide using the Grob method. The concentrations and specifications of the acrylamide, D3-acrylamide and methacrylamide standard solutions were designed specifically for this method. Each Kit also contains all sample preparation protocols and the GC test chromatogram and MS spectra of the standards (Figure 2). More information on the Acrylamide Kit can be found in the Product Listing (Table 1). Although the Grob GC-MS method gives excellent results and is widely accepted, the extensive sample preparation may be a drawback for some analysts, espe- cially those who prefer LC methods. In the SPE-LC-MS method developed by researchers at our Supelco® division, a mixed-mode cation-exchange SPE phase (Discovery DSC-MCAX) in series with a C18 SPE phase (Discovery DSC-18) is used to extract acrylamide from food prior to LC-MS analysis (Figure 3). The two SPE tubes are connected in series via an SPE tube adapter. The MCAX cartridge has both hydrophobic and ionic interactions and retains starch and oily interferences. The C18 cartridge retains the acrylamide by a weak hydrophobic mechanism. The eluate from the C18 car- tridge is analyzed by LC-MS using a fluorinated reversed phase column, Discovery F5. Unlike standard C18 HPLC phases, the F5 column gives enhanced retention of the polar acrylamide and excellent retention and peak shape using a completely aqueous mobile phase (Figure 4). Complete details on the SPE-LC-ESI-MS method is described in the Supelco Reporter, Volume 22.5 (GLG) which is available by calling 1-800-359-0682 (US only). 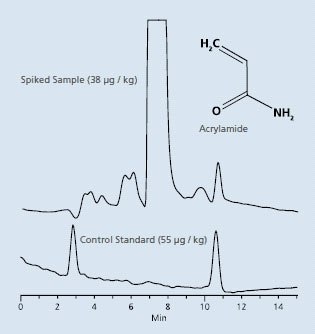 We offer the complete solution for acryl- amide analysis, no matter which analytical method you prefer. For GC-MS, we offer the Acrylamide Kit and SUPELCOWAXTM 10 GC capillary columns. By choosing the Kit, time consuming standard preparation is avoided and detailed protocols take away any method develop- ment time. For LC-MS, the Discovery line of SPE and HPLC phases provides the necessary retention, efficiency and selectivity. This method requires no derivatization to produce sufficient retention and detection, and sample prep is fast and easy with high recoveries of acrylamide from complex matrices.

An excellent resource for up-to-date information on acrylamide research and regulations is the website www.acrylamide-food.org. The site is maintained jointly by the FAO (UN), JIFSAN (US FDA and University of Maryland) and the WHO’s Food Safety Department.