Phospholipids (PLs) are abundantly (at the mg/mL level) present in biological fluids such as: blood, plasma, serum, and cerebrospinal fluids, among others. PLs are often co-extracted with a broad range of analytes of interest during sample preparation. The phospholipids present in a sample are notorious for producing various issues in LC/MS-based bioanalysis. PLs may cause ion suppression or, in rarer cases, ion enhancement, during MS detection. They also tend to build up on a reversed-phase (e.g., C18 and C8) column, fouling the chromatographic separation and ultimately shortening the column lifetime.

Consequently, the accuracy, reproducibility, and sensitivity of LC/MS bioanalyses may be greatly compromised if the PLs are not removed. HybridSPE® Phospholipid technology has been developed for selective and rapid depletion of phospholipids from biological samples prior to LC/MS analysis of small molecules. The technology utilizes the affinity of zirconia particles for selective binding and removal of phospholipids. The technology was introduced a few years ago in two product formats:

96-well filter plates for high throughput sample preparation and individual cartridges for low throughput applications. Here a new product format, an on-line cartridge, is described as an alternative option of phospholipid removal and sample preparation. The setup of the on-line cartridges with a LC/MS column is devised and the efficiency for phospholipid removal from protein precipitated plasma samples has been evaluated. Applicability of the system was demonstrated with three sets of compounds with different physiochemical properties. 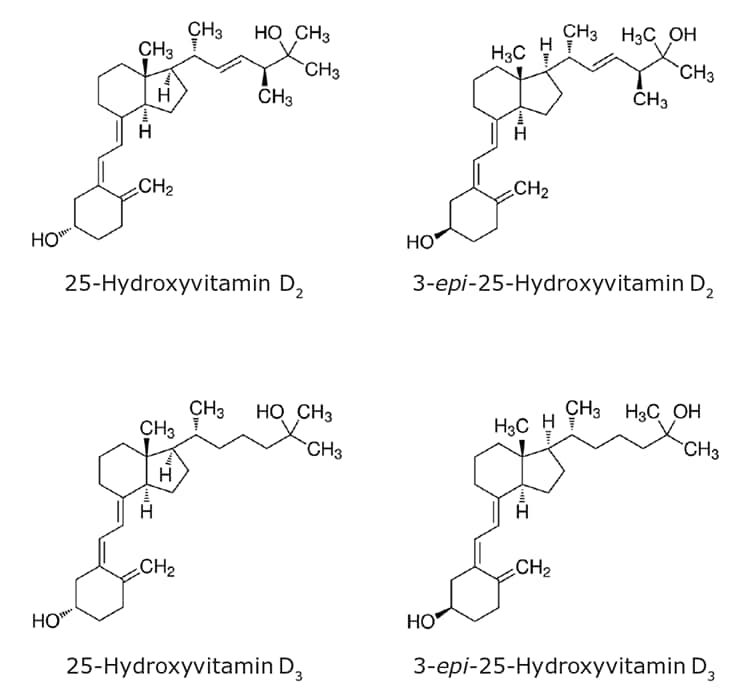 Sample Processing Procedure: The rat plasma or rat plasma spiked with analytes was protein precipitated by vortex mixing the plasma samples with the precipitation solvent at a 1:3 ratio. The mixture was then centrifuged at 10,000 rpm x 3 min and the resulting supernatant was collected for LC/MS analysis.

As shown in Figure 4, the setup consists of two pumps, one for HPLC separation, and the other for loading protein-crashed samples and washing the HybridSPE® on-line cartridges. A 50 µL tee is employed for mixing of sample loading mobile phase and the HPLC separation mobile phases. The 2-position switching valve allows for washing the cartridges once the samples are loaded onto the HPLC column. 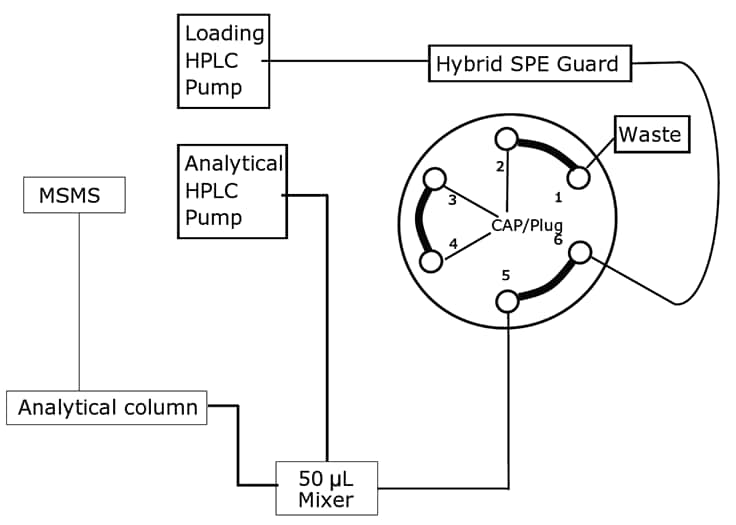 The Supel™ Genie HybridSPE® on-line cartridges are designed for removal of phospholipids from more than 100 injections of 1 µL of protein precipitated plasma samples. Figure 5(A) shows the phospholipids in the rat plasma, if not removed, give rise to two broad peaks of high intensity. The two peaks correspond to the phospholipids containing one and two fatty acyl chain(s), respectively. When the HybridSPE® on-line cartridge is set up with the LC/MS (Figure 4), no phospholipid peaks were detected, even at the 120th injection of the same rat plasmasample (Figure 5(B)). The results demonstrate the HybridSPE® cartridges are capable of elimination of the phospholipids from 120 consecutive injections of 1 µL of protein precipitated plasma samples. The applicability of the HybridSPE® on-line cartridges has been demonstrated with three sets of analytes including basic and neutral classes. As can be seen from Figure 6-8, narrow and symmetric peaks were observed for all of the tested analytes with a peak width at half height <6 s and tailing factors 0.9-1.3, respectively. Table 4 summarizes the recoveries and reproducibilities of the target compounds using the on-line SPE method. For all of the tested analytes, recoveries of 94-102% were obtained and reproducibilities of 1-5% were achieved. 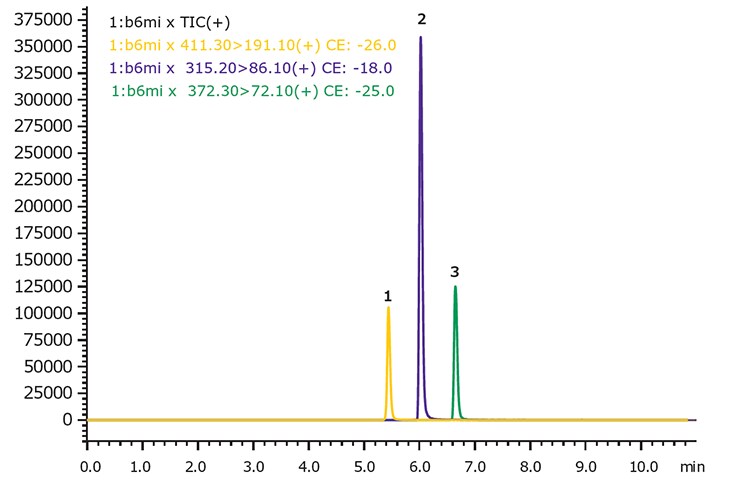 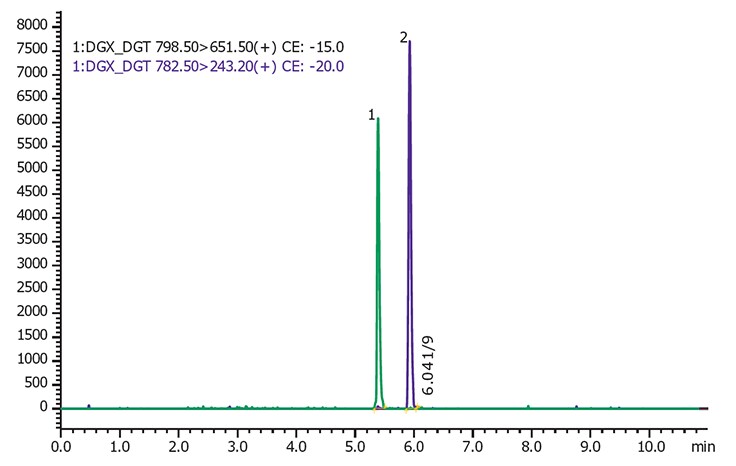 * The recovery was calculated by comparison of the peak area of the spiked analytes in plasma to those of the neat analytes at the same concentration.

An on-line cartridge for phospholipid removal with LC/MS analysis has been successfully developed. The performance testing demonstrates the on- line cartridges are capable of removing >95% of phospholipids from 1 µL of plasma samples even after 120 consecutive injections. Three applications have been established using on-line HybridSPE® with LC/MS detection. Recovery of the analytes is 94%- 102%, with a reproducibility of 1%-5%. For all of the tested analytes, narrow and symmetric peaks were observed, peak width at half height <6 s and tailing factors 0.9-1.3, respectively.