Headspace SPME-GC/MS Analysis of Terpenes in Hops and Cannabis

In this application, headspace-SPME combined with GC/MS was used to analyze some of the terpenes present in both common hops and cannabis.

Terpenes are small molecules synthesized by some plants. The name terpene is derived from turpentine, which contains high concentrations of these compounds. Terpene molecules are constructed from the joining of isoprene units in a head-to-tail configuration (Figure 1). Classification is then done according to the number of these isoprene units in the structure (Table 1). The configurations of terpenes can be cyclic or open, and can include double bonds, and hydroxyl, carbonyl or other functional groups. If the terpene contains elements other than C and H, it is referred to as a terpenoid.1

Terpenes are present in essential oils derived from plants and often impart characteristic aromas to the plant or its oil. For example, d-Limonene, which is found in lemon, orange, caraway, and other plant oils, has a lemon-like odor. Essential oils, with their component terpenes and terpenoids, have been applied in therapeutic use known as aromatherapy to aid in the relief of conditions such as anxiety, depression, and insomnia.2 This has led to the use of plants which contain these compounds in preparations such as oils, teas, and tonics.

The cannabis sativa (cannabis or marijuana) plant contains over 100 different terpenes and terpenoids, including mono, sesqui, di, and tri, as well as other miscellaneous compounds of terpenoid orgin.3 Although the terpene profile does not necessarily indicate geographic origin of a cannabis sample, it can be used in forensic applications to determine the common source of different samples.4 In addition, different cannabis strains have been developed which have distinct aromas and flavors; a result of the differing amounts of specific terpenes present.5 Humulus lupulus (common hops) and cannabis are both members of the family Cannabaceae.6 Consequently, there are similarities in the terpenes each contains. Terpenes give both plant commodities characteristic organoleptic properties and, in the case of cannabis, produce characteristic aromas when the buds are heated or vaporized.7

Dried cannabis sample was obtained courtesy of Dr. Hari H. Singh, Program Director at the Chemistry & Physiological Systems Research Branch of the United States National Institute on Drug Abuse at the National Institute of Health. The extract strain of the sample was not known. Hop flowers of an unknown variety were purchased from an on-line source. Pelletized of Cascade and US Golding hop varieties were purchased at a local home-brew supply shop. Chromatographic separation was performed on an Equity®-1 capillary GC column, and identification was done using retention indices and spectral library match. Final analytical conditions appear in the figures.

The SPME method was developed using a sample of dried hops flowers (0.2 g in 10 mL vial). The initial SPME parameters were based on previously published work.8 The GC/MS results of this analysis are shown in Figure 2. This initial set of parameters used the 100 µm PDMS fiber, a 1 g sample size, and 60 minute equilibration at room temperature prior to extraction. The sample size was then scaled down to 0.2 g, and the equilibration temperature increased to 40 °C. This increased temperature allowed the equilibration time to be decreased from 60 to 30 minutes without a loss in sensitivity (Figures 3 and 4). The initial extraction time used was 20 min, and a shorter extraction time of 10 minutes was evaluated. However a loss in sensitivity was noted, thus extraction time was maintained at 20 minutes. The DVB/CAR/PDMS fiber was then evaluated (Figure 5). As expected, this fiber extracted more of the lighter compounds, which by MS spectral match, were identified as short chain alcohols and acids. 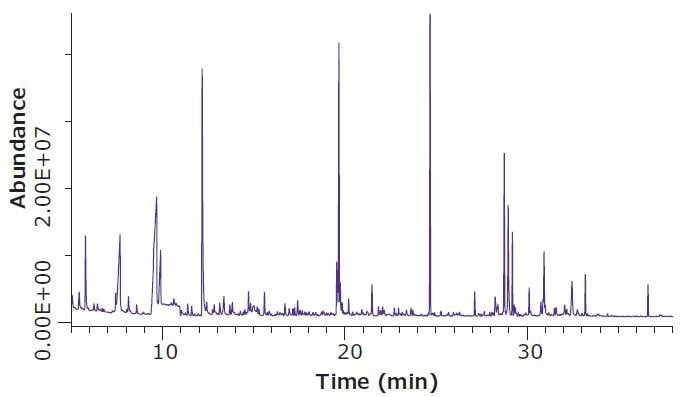 Using the DVB/CAR/PDMS fiber, samples of hops and cannabis were analyzed using the optimized SPME method. Peak identifications were assigned using MS spectral matching against reference spectra in the Wiley and NIST libraries. Confirmatory identification was done based on retention index. Retention indices were calculated for the compounds identified in each sample using an n-alkane standard analyzed under the same GC conditions. This data was compared with published values (Tables 2 and 3), and final identifications were assigned, as shown in Figures 6 and 7.

For the dried hop flower sample (Figure 5), the terpene profile should have shown a predominance of β-myrcene, humulene, and caryophyllene, which are typical aroma compounds in hops and hop oil.9 While caryophyllene was identified, both β-myrcene and humulene were not present at levels high enough to be detected by a library search. This may be due to the condition of the sample or the actual variety of hops analyzed since terpene profiles are known to vary between different hop varieties.10 The variety of the hop flowers analyzed is unknown, as the identity was not indicated on the packaging. For comparison, samples of two different varieties of pelletized hops were analyzed after grinding.

These samples appeared green in color, and had a much more characteristic hops-like odor than the dried flowers. Analysis of these samples showed a characteristic terpene profile, with high levels of β-myrcene, caryophyllene, and humulene present in both (Figure 6). The SPME method was able to detect differences in the terpene profiles between the two hops varieties. For example, farnesene (peak 18) was identified in the Cascade hops, but was too low to be confirmed in the US Goldings sample. The level of farnesene in Cascade hops is expected to be 3-7% of total oils, while in US Goldings the level should be <1%.13

The terpenes identified in the cannabis sample (Figure 7) are indicated in Table 3. The profile was similar to those found previously in the analysis of dried cannabis.4,8 Peaks 1-27 in Figure 7 (with the exception of peak 7) were monoterpenes and monoterpenoids. The later eluting peaks consisted of sequiterpenes and caryophyllene oxide, which is a sequiterpenoid. The most abundant terpene was caryophyllene. The predominance of this compound could be due to the specific strain of cannabis tested, and/or the nature of the sample tested, which was dried. Previous studies have shown the level of this compound to increase significantly relative to other terepenes and terpenoids with drying.4 Consequently, the levels of the more volatile monoterpenes and terpenoids would be expected to be less, and this was observed to some degree. Among the monoterpenes and terpenoids the most abundant were α-pinene and d-Limonene. 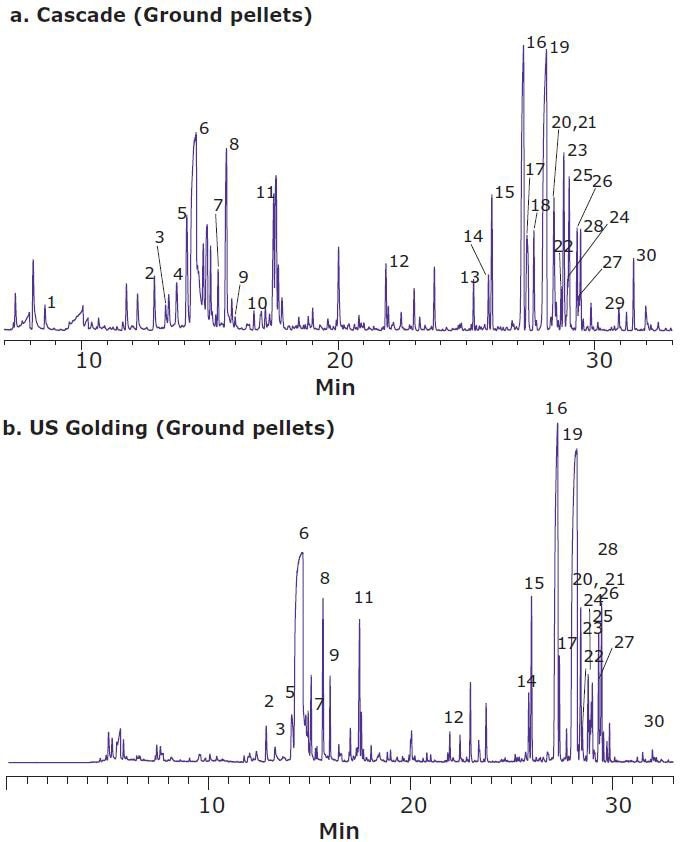 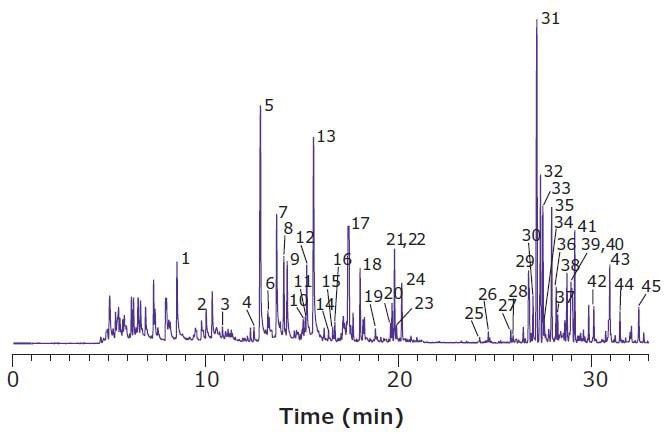 A simple headspace SPME-GC/MS method was used in the analysis of the terpene/terpenoid profiles of both hops and cannabis. The method was able to detect the characteristic terpenes and terpenoids of both, and to distinguish between different hops varieties.