The 96-Well 3D Spheroid BME Cell Invasion Assay offers a standardized, three dimensional, high content format for quantitating the degree to which invasive cells penetrate a barrier, consisting of basement membrane components, in vitro in response to chemoattractants and/or inhibiting compounds, which is fundamental for angiogenesis1, embryonic development2, immune response3, and tumor cell metastasis4. Basement membranes are continuous sheets of specialized extracellular matrix that form an interface between endothelial, epithelial, muscle, or neuronal cells and their adjacent stroma. They not only support cells and cell layers, but they also play an essential role in tissue organization that influences cell adhesion, migration, proliferation, and differentiation. Basement membranes are degraded and regenerated during development and wound repair, and they are major barriers to invasion by metastatic tumor cells. Current methods for assessing cell invasion through basement membrane barrier most commonly utilize a Boyden chamber approach, such as the Cultrex® BME Cell Invasion Assays. This method does provide a quick, easy, and quantitative approach. However, it is very difficult to visualize invasion microscopically, and the assay starts with a single cell suspension which may negate early steps in the metastatic process, such as the initial epithelial to mesenchymal transition (EMT).

The need for more complete and physiologically predictive cancer invasion models has driven the development of the 96 Well 3D Spheroid BME Cell Invasion Assay. There is growing evidence that tumor cell aggregates or spheroids are more representative of tumors in vivo, and they exhibit several physiological traits including similar morphology, the formation of cell-cell bonds, decreased proliferation rates, increased cell survival, tumor dormancy, and a hypoxic core5-8. Applying this model to a 3D culture invasion assay provides a more physiological approach for assessing tumor invasion and offers a visual component that can be quantitated through image analysis.

The 96 Well 3D Spheroid BME Cell Invasion Assay utilizes 3D Culture Qualified 96 Well Spheroid Formation Plate alongside a specialized Spheroid Formation ECM to drive aggregation and/or spheroid formation of cells. Upon completion of spheroid formation, the spheroid is embedded in an invasion matrix composed of basement membrane proteins. This matrix forms a hydrogel network on which invasive cells can travel. At this point, invasion modulating agents can be applied to the system to evaluate the impact on cell response. Cell invasion is visualized microscopically and can be quantitated through image analysis software.

III. Reagents and Equipment Required but not Provided 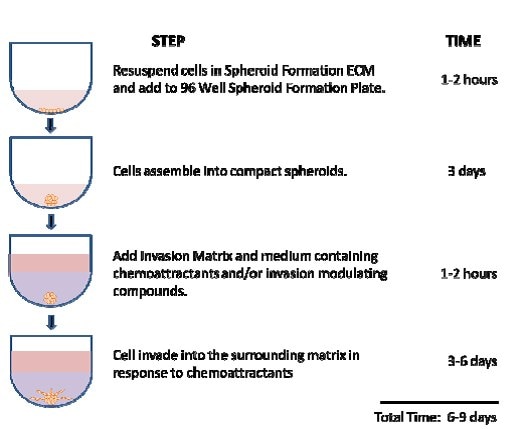 Product is stable for a minimum of 3 months from date of shipment when stored at –20 ⁰C in a manual defrost freezer. For optimal stability, store at –80 ⁰C. Avoid freeze-thaw cycles.

These procedures should be performed in a biological hood utilizing aseptic technique to prevent contamination.

Culture cells per manufacturer’s recommendation. The following procedure is suggested and may need to be optimized to suit the cell type(s) being studied.

Figure 2.Process for Analysis of 3D Invasion A) Capture image and convert to 8 bit; B) Set threshold to capture the total structure; C) Select structure to calculate total area.

1. The Cultrex® 3D Culture 96-Well BME Invasion Assay provides morphological and quantitative analysis of cell invasion. Invading cells project out of the spheroid into the surrounding matrix as spindle-like projections; whereas, there are no projections in the absence of an invasion matrix (figure 3). This results in large changes in surface area that occur in a relatively small amount of time for invasive cell lines which do not occur for non-invasive cell lines (figure 4). These changes in surface area can be measured and used to compare relative invasiveness of different cell lines or cell lines subjected to genetic manipulation. 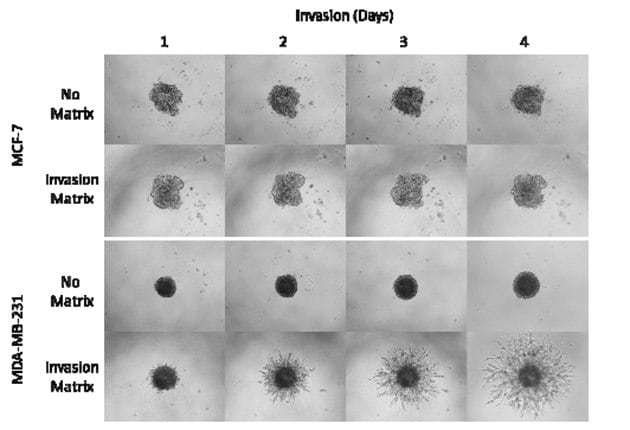 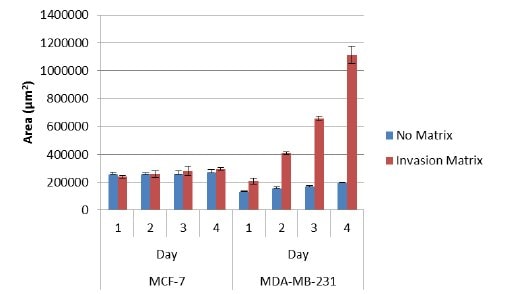 2. The changes in area can also be used to evaluate the effect of pharmacological compounds on 3D cell invasion. Once optimal assay conditions have been established, this can be evaluated as an endpoint assay. The following assay was conducted using MDA-MB-231 cells treated with varying concentrations of the inhibitor Sulforaphane.

a. First the areas were calculated for each condition, and these values were used to generate average and standard deviations: 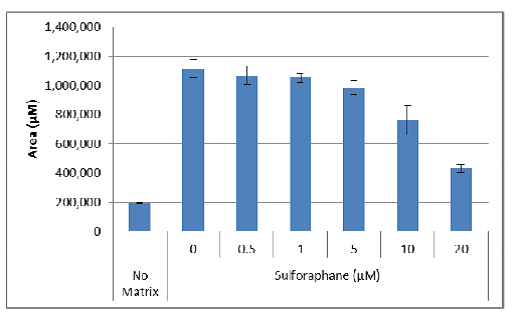 b. Next the area for the spheroid with no Invasion Matrix was used as a background value and subtracted from the average of each condition: 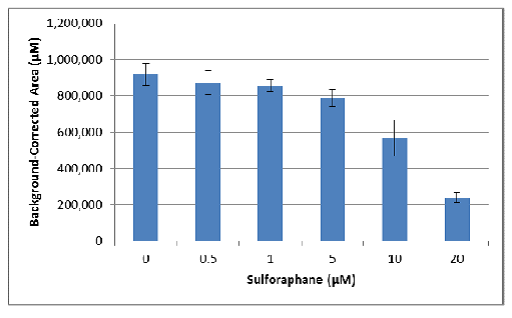 c. Finally, the resulting areas were divided by the area obtained for the no inhibitor control, providing the invasion index as a percentage of control: 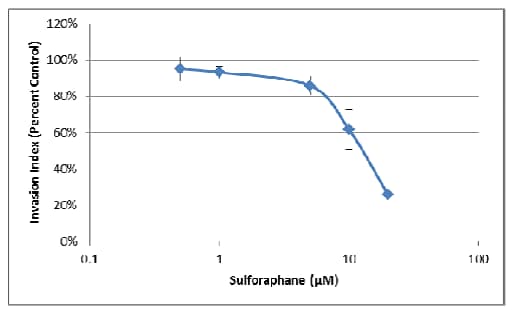 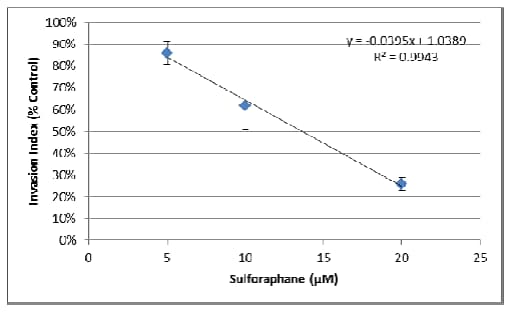