The yield and degree of purity of the mononuclear cells depend to a considerable extent on the efficiency of red cell removal.

Equipment and solutions required but not provided

Diluent and washing solution
The balanced salt solution for dilution of the blood and cell washing can be made according to the instruction below. Other diluents and washing fluids such as isotonic Ca2+/Mg2+ free phosphate buffered saline (e.g. Dulbecco’s PBS), salt solutions (e.g., Hank’s) or cell culture media (e.g., RPMI 1640) may also be used.

Dissolve in approximately 950 mL of distilled water and add concentrated HCl until the pH is 7.6 before adjusting the volume to 1L.

Ficoll-Paque product
Warm the Ficoll-Paque density gradient media to 18 °C to 20 °C before use. For samples larger than 3 mL, see Notes.

Preparation of the sample
Fresh blood should be used to ensure high viability of isolated mononuclear cells. Prepare the sample at 18 ºC to 20 °C.

Procedure for isolation of mononuclear cells 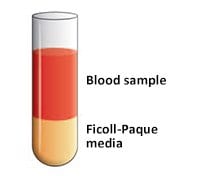 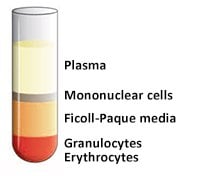 Figure 4.Prior to removal of the upper layer. 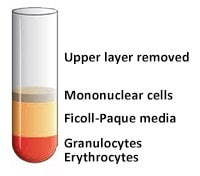 Note: A centrifugation at high speed increases the mononuclear cell recovery. However, if it is important to also get rid of platelets a lower centrifugation speed is recommended (60 to 100 × g).

Procedure for isolation of granulocytes

Notes
Anticoagulants: Heparin, EDTA, citrate, acid citrate dextrose (ACD), and citrate phosphate dextrose (CPD) may be used as anticoagulants for the blood sample. Defibrinated blood requires no anticoagulant. Defibrination, however, results in a lower mononuclear cell yield and may cause increased contamination by red cells3. It also causes selective loss of monocytes.

Bøyum has found that a slightly purer mononuclear cell preparation is obtained using EDTA instead of heparin as anticoagulant3. It has also been noted in the purification of mononuclear cells from sources other than peripheral blood that addition of heparin may cause gelling of cell suspensions4. Citrate-stabilized blood may result in better quality RNA and DNA than other anticoagulants, and produce a higher yield of mononuclear cells. Heparin affects T-cell proliferation and binds to many proteins. EDTA is good for DNA based assays, but influences Mg2+ concentration and causes problems for cytogenetic analysis5. It has also been shown that the RNA yield is higher in EDTA-blood than in heparin-blood6.

Blood volume: Larger volumes of blood may be processed with the same efficiency of separation by using centrifuge tubes of increased diameter while maintaining approximately the same heights of Ficoll-Paque media (2.4 cm) and blood sample (3.0 cm) as in the standard method described above. Increasing the tube diameter does not affect the separation time required.

Blood sample storage: Blood samples should be free of clots and processed as soon as possible after collection to ensure optimal results. Delays in processing the blood can result in loss of viability, lower cell recoveries and more contaminating granulocytes and/or erythrocytes. Indeed, storage for 24 h at room temperature has been reported to result in reduced lymphocyte yield, altered expression of surface markers, and reduced response to mitogenic stimulation 5,7,8. Dead cell removal: Dead cells are removed during cell isolation using Ficoll-Paque PLUS9,10,58.

Pathological blood samples: The standard method described above has been developed for the purification of mononuclear cells from peripheral blood of normal, healthy, human donors. Different results may be obtained with samples taken from donors with infections or other pathological conditions, such as cancer (see Further applications of Ficoll-Paque PLUS and Ficoll-Paque PREMIUM, page 12).

Troubleshooting inadequate performance
If used according to the recommended standard procedure, Ficoll-Paque PLUS and Ficoll-Paque PREMIUM may be expected to give trouble-free isolation of human peripheral blood mononuclear cells with results as shown on page 2. As mentioned earlier, Ficoll-Paque PREMIUM 1.073 and Ficoll-Paque PREMIUM 1.084 will lead to isolation of cell preparations having slightly different density subsets of mononuclear cells. However, deviations in certain experimental parameters may lead to poor results and the troubleshooting chart given here is intended to assist in the rapid identification and correction of the problem causing reduced performance.