Polychlorinated biphenyls (PCBs) were once widely used in many industrial and commercial applications such as insulating fluids, dielectrics, and lubricants. This included their extensive use in electrical transformers. PCB use has been banned in many countries, and the Stockholm Convention currently prohibits their production and use1. However, PCBs may still be released into the environment via illegal dumping, improper disposal of waste, releases and leaks from electrical transformers containing PCBs, or by burning of wastes in municipal or industrial incinerators2.

The Agency for Toxic Substances and Disease Registry (ATSDR) lists PCBs as the ninth most toxic chemicals for humans based on frequency, toxicity, and potential for exposure3. Since PCBs are lipophilic, they have a tendency to bioaccumulate, and can end up contaminating the diets of organisms high on the food chain, such as humans. If PCB-containing devices are cleaned or dumped into rivers or oceans, these compounds may find their way into aquatic life forms such as fish. Consequently, they can pose a health risk to people that regularly consume fish and fish-based products.

Fish oil is a popular dietary supplement due to the high levels of the beneficial fatty acids, eicosapentaenoic acid (EPA) and docosahexaenoic acid (DHA), that it contains. This has raised concerns with regards to PCB exposure from ingesting fish oil, resulting in maximum contamination limits set through European Union (EU) regulations, and inclusion on the California Proposition 65 contaminant list4,5. This situation has resulted in a need for analytical testing of fish oil for PCBs. Common test methods use gas chromatography coupled to a mass spectrometer (GC/MS) or an electron capture detector (GC/ECD) for analysis, and require some type of sample extraction and cleanup to separate the PCBs from the fatty fish oil matrix. Common methods for doing this include liquid extraction followed by sulfuric acid cleanup, gel permeation chromatography (GPC), or column chromatography using multilayer silica or alumina columns6. In this application, a solid phase extraction (SPE) method was developed using Supelclean™ EZ-POP NP SPE for extraction and a small silica gel cartridge for additional cleanup. The extract that was produced had low background, and could be analyzed by GC/ECD for a full range of PCB congeners.

Cod liver oil was purchased locally and spiked at 10 ng/g with 19 different PCB congeners ranging from mono to deca-chlorinated. The list included the 12 coplanar congeners (Table 1) designated by the World Health Organization (WHO) as “dioxin-like” in structure, as well as 7 additional congeners that are commonly found in the environment. After spiking, the oil was allowed to sit for several days prior to analysis. Unspiked oil was also reserved for testing. Samples of spiked and unspiked fish oil were extracted and cleaned using the procedures described in Table 2 and Table 3. Analysis was performed by GC/ECD using the conditions listed in Figure 1. Quantitation was done using external standards, against a 5-point calibration curve prepared in hexane.

Figure 1.GC/ECD Analysis of Fish Oil Spiked With PCBs After Only Extracting With Supelclean™ EZ-POP NP.

Initially, extraction and cleanup of the cod liver oil was done using the EZ-POP NP cartridge only. The resulting acetonitrile extract was concentrated and injected onto the GC/ECD system. However, the background was too high, and only the first two eluting PCB congeners were detected (Figure 1). Sample size and the volume of acetonitrile elution solvent were reduced in an attempt to reduce the background. However, these measures did not provide an extract clean enough for analysis by GC/ECD. The EZ-POP NP SPE cartridge was originally developed for the analysis of nonpolar contaminants in plant-sourced edible oils, and provides an extract that is clean enough for GC analysis. However, plant oils have different compositions than animal/marinesourced oils. Thus, a modification of the original EZ-POP NP SPE method for plant-based oils was necessary. Silica gel is a normal phase sorbent that is commonly used for fractionation and cleanup of oily samples. If it is used as the only extraction and/or cleanup method, the use of very large cartridges and solvent volumes is often necessary. For the cod liver oil extract prepared using the EZ-POP NP cartridge, we found that a very small 1 mL/100 mg silica gel cartridge provided sufficient cleanup for detection of all the PCB congeners (Figure 2). In order to use the silica gel cartridge, the acetonitrile extract obtained from the EZ-POP NP extraction had to be solvent exchanged into a nonpolar solvent. This was done by a simple back extraction into hexane.

GC Conditions the same as listed in Figure 1.

Recovery and Reproducibility
The final SPE method was applied to the extraction of a set of cod liver oil samples spiked at 10 ng/g. Figure 3 shows a summary of the average recoveries after blank subtraction, along with the error bars indicating reproducibility. Average spike recoveries ranged from 75-120%, with the most hydrophobic congener (No. 209) showing a lower recovery of 59%. Percent relative standard deviations (%RSD) for the six replicates ranged from 1-17%, with an average RSD of 5%. Three of the target PCB congeners were detected in the unspiked cod liver oil (Figure 4). None of these congeners are coplanar, or included on the WHO list of those designated as “dioxin-like”. The average amounts measured from three unspiked cod liver oil samples are presented in Table 4. Measurement reproducibility was <10% RSD for congeners No. 153 and No. 180. The higher %RSD for congener No. 138 was due to difficult peak integration in some samples caused by a negative spike in the baseline directly adjacent to the analyte peak. This type of baseline disturbance is not uncommon in ECD analyses, and can be caused by a dirty detector cell and/or elution of an interfering sample component (i.e. something that does not produce a response by ECD). 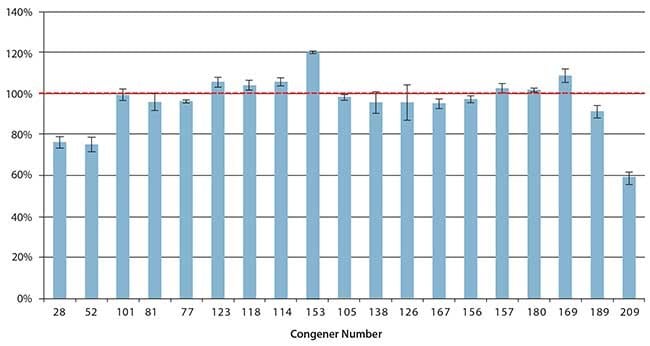 Comparison to Other Sample Preparation Methods

The cleanliness of fish oil extract obtained using the EZ-POP NP/silica gel SPE procedure was compared to alternate extraction and cleanup approaches: 1) hexane dilution followed by sulfuric acid cleanup, and 2) hexane dilution followed by large silica gel SPE extraction (2 g/12 mL) and cleanup with a C18 SPE cartridge (1 g/6 mL). Samples of spiked cod liver oil were prepared using these two approaches, and both resulting extracts were found to contain too much background for GC/ECD analysis (Figure 5 and Figure 6). In the case of the sulfuric acid cleaned extract, only two PCB congeners could be detected free of background, while the silica/C18 SPE prepared sample had too much matrix to detect any of the congeners.

Conditions the same as listed in Figure 1.

Because of the successful analysis of the pure fish oil sample, the EZ-POP NP/silica gel extraction and cleanup procedure was applied to over-the-counter fish oil capsules. Three different brands were analyzed to determine if the target PCBs were present in unspiked samples. However, there was background present in the extracts of the fish oil capsules that was not observed with the pure cod liver oil (Figure 7). This background interfered with detection of the targeted PCB congeners in 2 of the 3 samples tested. In brand “C,” the background was low enough to allow for analysis; however, none of the targeted PCB congeners were detected. The reason for the high background in the fish oil capsule extracts may be related to the ingredients found in the capsules. It was noted that the ingredient lists included fillers such as gelatin and water. It is possible that these additives interfered with the action of the sorbents in retaining some of the lipid background. The presented method of sample preparation using Supelclean™ EZ-POP NP and silica gel SPE provides adequate cleanup of cod liver oil, allowing for analysis of PCBs via GC/ECD. By comparison, the traditional sample preparation methods of dilution/acid cleanup, and silica gel/C18 SPE yielded extracts that were unsuitable for analysis of PCB congeners by this analytical technique. The method provided recoveries of >75% from spiked replicates for all tested congeners except No. 209 (59% recovery). As for unspiked cod liver oil, the method detected low levels of some PCB congeners included in the analyte list; however, none were those considered “dioxin-like.” While the method worked well for pure fish oil, it was not suitable for over-the-counter fish oil capsules. This may be due to the presence of non-lipid fillers in the capsules such as water and gelatin, which can interfere with the activity of both the Florisil® in the EZ-POP NP cartridge, and the silica in the secondary cleanup cartridge, resulting in less retention of background.