ADC Mimic – MSQC4 plus 2, 4, 6, or 8 dansylcadaverine- SMCC mimic-linkers. Each conjugation to a Cys residue imparts a +668 Da mass shift.

Here, we build on previous work describing the preparation of such a non-toxic ADC-Mimic by utilizing the ADC-Mimic and the underlying mAb (MSQC4) to perform a comparison of chromatographic stationary phases. We also present the use of the ADC-Mimic to develop a workflow to characterize ADC variants by first separating them via hydrophobic interaction chromatography (HIC), collecting fractions, and subsequently analyzing the ADC variants by RP-LC-UV-MS.

MSCQ4 was reduced prior to analysis while the ADC Mimic was deglycosylated overnight with PNGase F and then reduced. Reduction was performed with 7.4 M GndCl and 100 mM DTT at 50 ºC. An Acquity-QToF Premier was used for the column comparison and mass confirmation. A Prominence (Shimadzu) was used for the HIC separation and fractionation. An M-Class Acquity-Xevo G2 QToF (Waters) was used to analyze the HIC fractions after deglycosylation and reduction. Figure 4.Deconvoluted mass spectra of the light chain species of the deglycosylated, reduced ADC Mimic shown in Figure 2 (A.), where L = light chain and the number represents the number of conjugations observed.

Figure 5.Deconvoluted mass spectra of the heavy chain species of the deglycosylated, reduced ADC Mimic shown in Figure 2 (A.), where H = heavy chain; H’ = oxidized heavy chain and the number represents the number of conjugations observed. 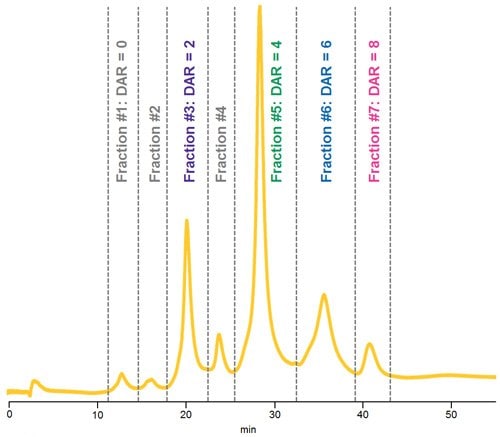 Figure 7.Reversed phase separation of collected HIC fractions pertaining to (A.) DAR 2, (B.) DAR 4, (C.) DAR 6, and (D.) DAR 8 ADC Mimic species, which were deglycosylated and reduced prior to LC-UV-MS analysis.

Mass spectrometry was used to confirm light chain and heavy chain species with zero or more conjugations of dansyl-cadaverine-SMCC mimic-linkers.