Exactly Why is Low Bleed Important for Capillary Columns?

Capillary column manufacturers often use the term ‘low bleed’ to describe their columns. How exactly does ‘low bleed’ relate to the needs of end-users? Low detection limits, positive mass spectral identifications, and instruments that are not down for maintenance are all important daily goals for a GC analyst. Using a capillary column, such as Supelco SLB-5ms, that has a low bleed characteristic is an important step in achieving these goals.

High noise level is undesirable since it makes it difficult for the integration software to adequately measure all of the peak area. The better the signal-to-noise ratio, the more area counts are obtained, resulting in the ability to achieve lower detection limits. Figure 1 shows a graphic illustration of a peak when column bleed (a significant source of system noise) is low vs. high.

Analysts rely on GC-MS and other GC methods to provide highly sensitive, low-level detection. When measurement is required at the ppb or even ppt level, extreme care must be taken to ensure that nothing interferes with the analysis. For this reason, today’s chemists require capillary columns, such as Supelco SLB-5ms, that exhibit a very low level of bleed in addition to being inert towards the various analytes in the method.

Analysts using MS detection have an additional concern: high column bleed that can interfere with proper mass spectral identification of analytes. In addition to the primary, or quant ion < in a mass spectrum, MS programs are set to measure the abundance of other ions that are characteristic to the analyte of interest. For the software to assign a high probability of positive identification, these so-called secondary, or qualifier ions must be within specific ratio ranges relative to the primary ion when the mass spectrum from a peak in a realworld sample extract is compared to a mass spectral library entry. If extraneous ions, such as those column bleed, are present in the mass spectrum, the software will assign a lower probability of positive identification.

Additionally, many US EPA methodologies require GC-MS analysts to assign tentative identification to non-target “unknown” compounds which may also be present in the sample extract. These are called Tentatively Identified Compounds, or TICs. In order for the software to assign a high probability of positive identification, the mass spectrum from the sample extract must compare well with the mass spectral library entry. High column bleed levels can interfere with this comparison, resulting in the reporting of TICs that are either poorly identified or misidentified.

Figures 2 and 3 show mass spectra of benzo(g,h,i)perylene at a 5 ng on-column level and an oven temperature of 325 °C. The major column bleed ion, m/z = 207, resulting from the formation of hexamethylcyclotrisiloxane (D3), should be present at a level lower than m/z = 138 and m/z = 277, two secondary ions used to confirm the identity of the peak. Figure 2 is from a Supelco SLB-5ms column. The major bleed ion, m/z = 207, is lower than both of the secondary ions. Figure 3 is from a Competitor “A” column. The major bleed ion is actually larger in size than the two secondary ions. 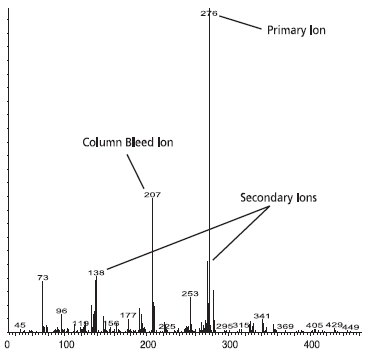 What does all this mean? The MS software would assign a low probability of positive identification for benzo(g,h,i)perylene for analyses using the Competitor “A” column. For TICs, the situation would be less desirable since retention time data would not be available to assist with identification.

High column bleed can foul the GC detector, reducing detector sensitivity. When the fouling becomes severe enough to warrant action, the detector must be dismantled and cleaned, a procedure that may remove an instrument from service for one or more days. MSD lenses can become coated and require polishing. The active foil in an ECD can become fouled to the point the entire detector needs to be sent out for refurbishing. Partially plugged FID jets need to be replaced. PID windows can become layered with contamination and require cleaning.

Low detection limits, positive mass spectral identifications, and instruments that are not down for maintenance are all important daily goals for a GC analyst. Using a capillary column, such as Supelco SLB-5ms, that has a low bleed characteristic is an important step in achieving these goals.

For use as guard columns to protect your analytical column from damaging sample components. Match the deactivation of the tubing with the polarity of the injection solvent.

This device consists of a double-tapered ferrule and a stainless steel compression housing with a threaded cap. Small and light (2.3 cm x 0.6 cm, 4.4 g with ferrule), it provides a gas tight seal. This unit maintains inertness with no change in column efficiency