The SLB®-IL60 gas chromatography (GC) column is based on an ionic liquid stationary phase platform and displays desirable features that existing non-ionic liquid columns do not. This is the third of several Reporter articles which explore various aspects of this column[1,2].

Benefits of higher temperature when performing GC include decreased analysis times, elevated bake-out to remove large non-target compounds, and analysis of additional higher boiling compounds. The SLB-IL60 column is stable to 300 °C for both programmed and isothermal use. This is 20-40 °C higher than the programmed limits and 20-50 °C higher than the isothermal limits of traditional polyethylene glycol (PEG) columns.

To illustrate the superior stability of the SLB-IL60 column, it was compared directly to five popular commercially available PEG columns, each from a different manufacturer. All columns were 30 m ~ 0.25 mm I.D., 0.25 µM dimensions, except the SLB-IL60 column, which has a 0.20 µM film thickness. Table 1 shows the maximum temperature limits for all columns tested. Complete specifications of SLB-IL60 columns are shown in Table 2.

Each column was subjected to an abbreviated thermal stress test, which was developed to determine high temperature (300 °C) stability. The sequence for this test is shown in Table 3. During this test, columns were subjected to a total of 15 high-temperature runs (oven programmed from 50 °C to 300 °C with a 20 minute hold). Over the duration of the test, each column was exposed to 300 °C for a total of 300 minutes. A polar column test mix and a rapeseed oil FAME mix were run on each column before and after thermal stress.

Before, during, and after the thermal stress test, several indicators of chromatographic performance (FID bleed, inertness, selectivity, polarity, and retention factor) were monitored for each column.

FID bleed levels from each column operated to its programmed temperature limit were measured before and after thermal stress. The data is displayed in Figure 1 and show that exposing any of the PEG columns to 300 °C for as short as 300 minutes triggers increased FID bleed, even when the column is subsequently operated within its programmed temperature limit. Better high temperature stability is exhibited by the SLB-IL60 column, in that it maintains a lower FID bleed level before, during, and after this thermal stress. 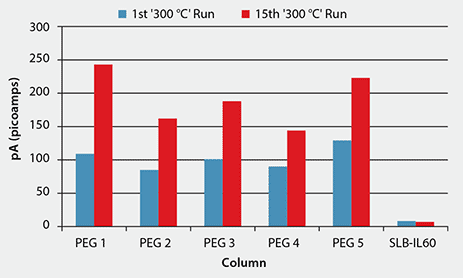 Before and after the thermal stress test, a 9-component polar column test mix was analyzed on each column. All five PEG columns produced almost identical chromatography, with the PEG 3 column performing slightly better than the other PEG columns. Figure 4 shows chromatograms obtained from the PEG 3 and SLB-IL60 columns. The elution order of 2,6-dimethylaniline and 2,6-dimethylphenol (peaks 7 and 8) is reversed on the SLB-IL60 column compared to the PEG columns.

Comparing the before and after chromatograms reveals a selectivity change on all PEG columns, most notably the decrease in the relative retention of 2,6-dimethylaniline (peak 7) and 2,6-dimethylphenol (peak 8), and the increase in the relative retention of n-eicosane (peak 9). This indicates the PEG columns became less polar, and therefore less selective for polar analytes, and more selective for non-polar analytes. Conversely, no change in selectivity was observed for the SLB-IL60 column. This indicates the SLB-IL60 column can be exposed to 300 °C without changing its phase chemistry, or altering its relative amounts of possible analyte-phase interactions. 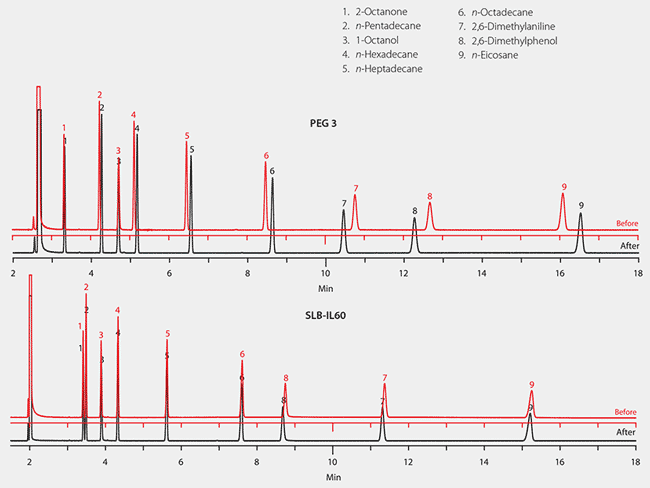 A rapeseed oil FAME mix was analyzed on each column before, during, and after the thermal stress test. ECL values for C18:3n6 were calculated for each run and are shown in Figure 5. Decreasing ECL values indicate all PEG columns became less polar, experiencing a decrease in analyte-phase interactions responsible for retention of polarizable compounds (such as C18:3n6, an unsaturated FAME) relative to analyte-phase interactions responsible for retention of non-polar compounds (such as C18:0, a saturated FAME). The same phenomenon was not observed with the SLB-IL60 column, indicating this column can be exposed to 300 °C without causing a change in polarity.

Figure 5.C18:3n6 ECL Values Before, During, and After Thermal Stress Test

The rapeseed oil FAME mix chromatograms were also used to calculate retention factors, based on the C24:0 FAME peak. As shown in Figure 6, all of the PEG columns exhibited an increase in retention factor. This is another indicator the thermal stress test caused the PEG columns to become less polar, developing an increase in analyte-phase interactions responsible for the retention of non-polar compounds (such as C24:0, a saturated FAME). As expected, no change in retention factor was observed with the SLB-IL60 column, indicating this column is not affected by 300 °C oven programmed runs.

Figure 6.C24:0 Retention Factors Before, During, and After Thermal Stress Test

Columns based on polyethylene glycol phase chemistry are widely used for a variety of applications (such as solvents and FAMEs), but are limited to use below 260-280 °C oven temperature. It may be desirable to use higher temperature to decrease analysis time, perform an elevated bake-out for removal of large non-target compounds, or analyze higher boiling compounds. However, these PEG columns cannot be exposed to a 300 °C oven temperature, even for brief periods, without adversely affecting chromatographic performance, based on indicators such as FID bleed, inertness, selectivity, polarity, and retention factor. The SLB-IL60 column is similar in selectivity to PEG columns, but can be used to 300 °C without degradation of chromatographic performance. Because the SLB-IL60 column has better high temperature stability, it can expand the use of a polar column for applications that PEG columns cannot perform.