Those doing gas chromatography must routinely measure gas flows when setting up an instrument, developing a method, or troubleshooting. Many chromatographers rely on electronic pressure control (EPC) for setting flow rates, however a flowmeter is still an essential tool to have in case troubleshooting is necessary. Also, many older gas chromatographs still in use do not have EPC, requiring that flows be set manually using a flowmeter. There are a variety of flow measuring devices available for doing this, and each has its advantages and limitations. Gas flowmeters generally fall into two different categories, volumetric and mass. In this article, we will discuss the difference between these, along with commonly used examples of each type.

The most common device for measuring a volumetric flow rate is a bubble flowmeter. These devices are used to determine flow by measuring the time required for a gas stream to move a soap bubble through a specific volume. The most basic configuration of a bubble flowmeter is illustrated in Figure 1. A stopwatch is required to manually time the bubble’s movement up the calibrated tube between two markings. Electronic versions of the bubble flowmeter are also available as shown in Figure 2. The principle is the same as the manual version, except that an optical sensor detects when the bubble enters and exits the calibrated tube. A microprocessor then calculates the resulting volumetric flow rate and displays it on a small screen. 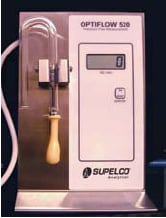 There are several important considerations when using a bubble flowmeter:

To minimize the error introduced by diffusion of air, one can purge the flowmeter tube with several volumes of the gas being measured prior to taking the flow reading.

If we determine the amount of gas exiting a GC column as mass per unit time, the result is a mass flow rate measurement. Unlike volumetric flow rate, this measurement is not affected by atmospheric temperature or pressure changes. Also, no compensation for water vapor effect is required. The devices used for mass flow measurements in GC are usually thermal flowmeters, which are commonly referred to as mass flowmeters. Two examples of mass flowmeters are shown in Figure 3. The operating principle for both meters is similar: gas flow transfers heat between two sensors in proportion to the mass and velocity of the gas flow. The resulting heat imbalance produces an electrical signal in the flow sensor, which is used to calculate mass flow in mass/unit time. This measurement is then converted to a volumetric value using constant temperature and pressure values, as well as the density of the gas. Fluctuations due to ambient temperature are minimized by the heat. Because gases have differing thermal conductivities and densities, the meter must be calibrated for the specific gas to be measured. In contrast, a volumetric flowmeter is nonspecific, i.e., it can be used for any gas. 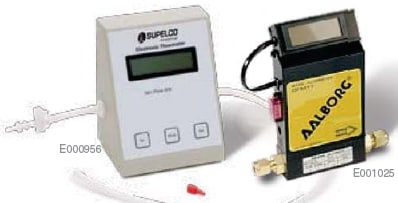 In choosing a flowmeter for an application, the following points should be considered:

All flowmeters have specifications for usable flow ranges. Using a meter outside of its specified flow range will result in inaccurate measurements. If the meter is going to be used in a “non-typical” laboratory environment, outside for example, consider using a mass flowmeter if you do not want to apply correction factors for temperature and atmospheric pressure. Make sure the meter is calibrated for use with the gases you will be measuring. For bubble flowmeters, this is not an issue since they are non-specific. If the flow measurements to be taken will be compared with another system or instrument, it is advisable to use the same type of flowmeter used for the later. Finally, mass flowmeters must be calibrated for the gas to be measured. Most are calibrated for use with the typical GC gases: helium, hydrogen, nitrogen, air, and 5% argon/methane.

When choosing a flowmeter, it is essential to consider the attributes and needs of the application for which it is to be used. In this article, we provided information related to measuring flow by both volume and mass using flowmeters available from Supelco. If you need additional assistance in selecting a flowmeter, please contact our technical service chemists for help in determining the best device for your application.