Amino acids are building blocks of peptides and proteins. Enantiomeric separation of these molecules can be performed through chromatography by chiral stationary phases. This article describes the chiral GC analysis of one amino acid, proline, after achiral derivatization.

The benefits of a chiral GC analysis method include; better sensitivity than standard HPLC methods, shorter analysis times, and simple method development, as chiral selectivity can be increased by decreasing the analysis temperature. In addition, the elution order of enantiomers can be reversed, a phenomenon called enantioreversal, using various techniques, including derivatization. Enantioreversal can be utilized to analyze trace levels of one enantiomer in the presence of another.

An amino acid molecule contains both amine and carboxyl functional groups. Before GC analysis, the carboxyl group of the analyte must be esterified, and subsequently the amino group needs to be blocked to obtain good peak shape and selectivity. The carboxyl group can be esterified using methanolic HCl (methylated), trimethyl chlorosilane (TMCS), or N,O-bis (trimethylsilyl) trifluoroacetamide (BSTFA). The reagents used for the amino group’s derivatization typically are trifluoroacetic anhydride (TFAA), acetic anhydride and chloroacetic anhydride.

A sample mixture of D and L proline was methylated and then acetylated using a two-step reaction1: 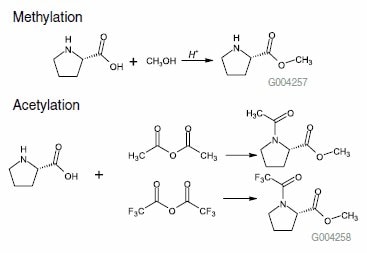 Chromatograms showing the GC analyses of the proline mixture are presented in Figures 2 and 3. An Astec CHIRALDEX® G-TA,2 which is a unique chiral GC column made using a trifluoroacetyl derivatized cyclodextrin, was used. The achiral derivatization did not affect the chiral center of the molecule, as evidenced by the presence of two peaks in the chromatograms. However, the two different acetylation reagents resulted in an elution order reversal of the D and L enantiomers (enantioreversal). Trifluoroacetic anhydride also produced more volatile derivatives than the acetic anhydride, resulting in a shorter analysis. Figure 2.Chiral GC Analysis of D and L Proline on the CHIRALDEX G-TA after Methylation with Methanolic HCl and Acetylation with Acetic Anhydride 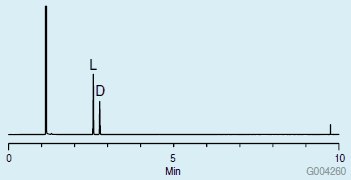 Figure 3.Chiral GC Analysis of D and L Proline on the CHIRALDEX G-TA after Methylation with Methanolic HCl and Acetylation with Trifluoroacetic Anhydride

The derivatization scheme used in this study enabled the replacement of both active hydrogens in the proline molecule, thus improving its chromatographic properties for GC analysis. If just the methylation step is done, the remaining underivatized amine group will result in peak tailing on the CHIRALDEX G-TA. This is demonstrated in Figure 4. However, after the acetylation step, protection of the amine group resulted in a significant improvement in peak shape (Figure 5), as well as a more volatile derivative, resulting in a shorter retention time.

Figure 4.L-Proline on the CHIRALDEX G-TA Column after Methylation with Methanolic HCl only

Figure 5.L-Proline on the CHIRALDEX G-TA Column after Methylation with Methanolic HCl and Acetylation with Acetic Anhydride

A two-step derivatization process (methylation followed by acetylation) can be used to selectively replace active hydrogens on the amino acid proline. This process will not cause racemization of the compound, and therefore allows a successful separation of the enantiomers on the CHIRALDEX G-TA column. Using different acetylation reagents, such as acetic anhydride and trifluoroacetic anhydride, enantioreversal of the D and L enantiomers can be achieved.