One of the most important aspects of our ultra-pure MALDI matrix substances is their ability to dissolve rapidly and completely; a brief vortex mixing is typically sufficient. Actual performance of the ultra-pure MALDI substances in situ is demonstrated in the accompanying figures with a test mixture of five peptide standards from our ProteoMass™ line (Table 1). MALDI-MS experiments were performed on a Shimadzu Kratos Axima CFR in Reflectron mode.

The comparison of MALDI mass spectra using the ultra-pure grade HCCA versus standard grade is shown in Figure 2. Note that the use of the ultra-pure HCCA matrix resulted in significantly higher peak resolution. Even when the peptide standard sample was diluted 10-fold (Figure 3), the use of ultra-pure HCCA provides a clear spectrum with resolution (Figure 3a) comparable to the more concentrated sample. In contrast, the standard quality HCCA did not yield a suitable spectrum (Figure 3b).

Figure 2.Comparison of MALDI-MS spectra provided by ultra-pure and regular grade HCCA(Cat. No. 39468)

MALDI (matrix-assisted laser desorption/ionization) expands the application of mass spectrometry into the analysis of high molecular weight, non-volatile and thermally labile compounds, such as intact proteins and oligonucleotides. Moreover, it has become an important technique in proteomics research. MALDI requires relatively little sample preparation and is more amenable to topological imaging compared to other forms of MS ionization.

The MALDI technique involves mixing the sample with a matrix substance followed by crystallization by different techniques on the MALDI sample plate. The crystallized sample-matrix mixture is irradiated by laser light, usually UV. As the matrix absorbs the light energy, it evaporates into the gas phase, resulting in an indirect ionization of the sample molecules. Although there have been numerous experiments to simplify MALDI by eliminating the sample-matrix mixing step, like direct MS from solid supports or 2D-gels, using a matrix substance (chemical) is still the most common approach.

A typical MALDI matrix substance is an aromatic acid with a chromophore that absorbs strongly at the wavelength of the incident laser. Choosing a suitable matrix of high quality is the key to the success of a MALDI-MS experiment. Organic impurities can lead to extraneous peaks, especially in the low mass range. Trace levels of ions, especially Na+ and K+, form adducts with sample molecules. These adducts differ in mass according to the number of positive ions and complicate the MS spectrum. Because of the strict purity requirements for both organic impurities and inorganic ions, many MALDI users have been forced to recrystallize commercially available, but impure, matrix substances.

The ever-increasing sensitivity of MALDI-MS instruments and the trend of decreasing sample quantities (e.g. excised spots from 2D-gels in proteomics) requires high purity and high quality MALDI substances, in particular the MALDI matrices. Because of the success of our current offering, we recently developed a process to manufacture MALDI matrix substances with even higher purity, superior to anything that was technically feasible previously.

Our MALDI matrix substances are extensively purified to meet these specifications and provide sufficient quality to meet the most demanding applications.

The excellent performance of the ultra-pure MALDI matrix substances toward dilute samples or very small sample volumes, where high sensitivity is required, is of great benefit when analyzing peptides from enzymatic digests separated by 1D- or 2D-gels, as in proteomics experiments. In this case, however, not only must the MALDI matrix be of high purity, but the dyes used to stain the gels before excising the spots must allow the visualization of low abundance proteins. The LUCY™ fluorescent dyes from meet this requirement. Figure 4 shows a typical example. A 100 ng band of β-galactosidase was excised from a 1D-gel which was stained with Lucy-506. After trypsin digestion and peptide extraction using the Trypsin Profile IGD Kit (Cat. No. PP0100), MALDI-MS was performed by mixing peptides with ultra-pure HCCA matrix. The protein could be identified by database analysis and peptide mass finger print. The resulting MALDI mass spectrum is shown in Figure 4. 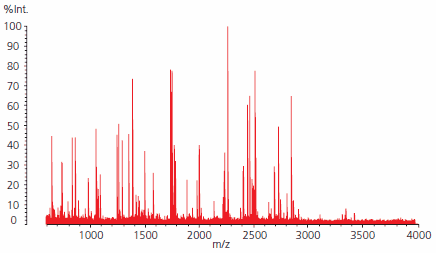