While the Ascentis Express C8 and C18 provide classic reversed-phase selectivity, the RP-Amide phase offers an alternative selectivity. Supelco first commercially introduced the EPG phase in 1988. At that time, large tailing factors for basic analytes continued to plague conventional C18 and C8 bonded phases. The EPG phase was found to improve peak shape of basic analytes. The early generation EPG phases were based on a two-step bonding process (Figure 1). The first step was the bonding of an aminopropylsilane to the bare silica surface creating a surface with amine functionality. In step two, palmitoyl chloride was reacted with the amine to create a long chain amide. Not all amines would be converted in the process, leaving a mixed system. These early generation EPG phases suffer from poor reproducibility.

Next generation phases, including Ascentis Express RP-Amide, are produced using a one-step process (Figure 2). In the single step process, no free amino ligands occur since the amide is introduced as a whole unit. This one-step bonding process yields excellent batch-to-batch reproducibility. Interestingly, not all EPG phases on the market use the modern, one-step bonding approach.

As previously mentioned, the Ascentis Express RP-Amide phase reduces silanol interactions with basic analytes, improving peak shape. A good test to demonstrate this effect is highly basic compounds using a mobile phase pH of 7. At this pH, many of the residual silanols are in the ionized form and the basic compounds are protonated.

The protonated (charged) bases interact with the charged silanols via ion exchange and result in a tailing peak. A test mix of tricyclic antidepressants was analyzed on Ascentis Express RP-Amide and a C18 column with a mobile phase pH of 7 (Figure 3). As shown in Figure 3, the RP-Amide produces more symmetrical peaks than the C18 for these difficult test probes. Asymmetry data is summarized in Figure 4 for doxepin, imipramine, and amitriptyline. 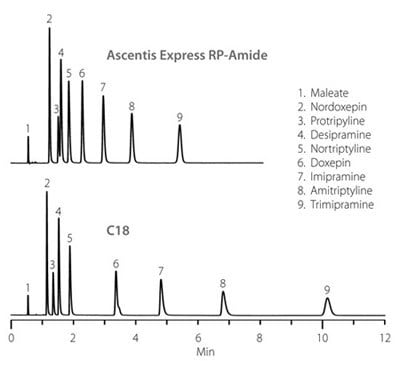 The selectivity differences between the RP-Amide and the C18 can be a useful tool in method development. In many cases, when peaks co-elute on a C18 phase, the RP-Amide can be substituted to achieve separation without a change in mobile phase.

Ascentis Express RP-Amide provides stable and reproducible analyte retention in 100% aqueous mobile phases. Many C18 phases are known to suffer from phase collapse under highly aqueous mobile phase conditions causing loss of retention. Shown in Figure 6 is a mix of organic acids analyzed under 100% aqueous conditions. Excellent selectivity and peak shape is noted for all the test probes, even citric acid, which is a notoriously difficult analyte. 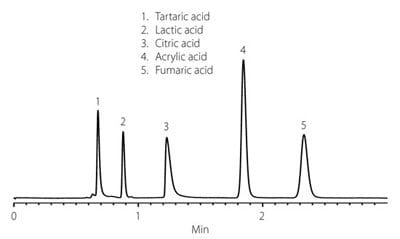